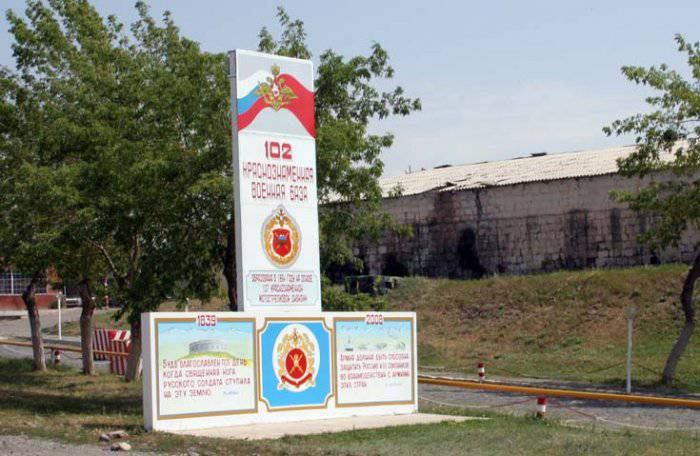 They want to finally oust Russia from the South Caucasus region. Thus, Deputy Foreign Minister of Azerbaijan, President’s Personal Representative I. Aliyev for the settlement of the Nagorno-Karabakh conflict, Araz Azimov, said that Russia should abandon its military presence in the South Caucasus. The Russian Federation should change its concept of presence in this region from military to economic.


It is clear that he voiced not only the wishes of Baku, because the Russian military presence in the South Caucasus and the Caucasus in general is an annoying factor for many in the world. Considering the factor who currently controls Russia, such “signals” are no longer surprising - for example, Moldova and Romania expect that the Russian Federation will demilitarize Transnistria by agreeing to its inclusion in Moldova.

Araz Azimov also hinted at the “reward” of Moscow: “It seems to me that the time has come to change Tanks to tankers. " “Tankers," apparently, means the possibility of revising Baku’s energy strategy in favor of Russia. What does Azerbaijan want? Given the process of rapidly building up the military power of the Azerbaijani armed forces, which has been going on in recent years and continues at present, Baku is ready to solve the Nagorno-Karabakh problem by military means. All the same, Armenia and Nagorno-Karabakh will not yield. But this scenario is threatening a war with the Russian Federation - our 102nd military base is located in Armenia, its location there has been extended until 2044. So they offer Moscow to "leave", they say, we ourselves will solve everything here, without an "older brother". Azerbaijan has US interests behind it, which continue the strategy of "strangulation" of Russia.

According to the vice-president of the Russian Academy of Geopolitical Problems, Academician Araik Sargsyan, Russia should not leave Armenia, “after all, if it loses Armenia, this would mean the loss of the entire Southern and Northern Caucasus to Tatarstan and Bashkiria”.

The Russian military presence in Armenia, though small, is only one base (the number of members is approximately 4,4 thousand, and half of it is Armenian), but it determines the balance of power in this region. If not for this presence, the war, with considerable probability, would have already begun, given the aggressive aspirations of the Azerbaijani elite. Baku leads an anti-Russian policy, although not as frank as Georgia. Baku has already invited the North Atlantic Alliance to be present on a permanent basis in Azerbaijan, leading joint military programs with the bloc, so that in America on July 31 joint US-Azerbaijan two-week military exercises will begin. Their main task is to test the interoperability measures of the two armies during peacekeeping operations. In addition, behind Turkey’s back is Turkey, which is our old enemy, and one should not think that the old offenses have long been overgrown.

Armenia is our only ally in the region and in general is one of the few countries where the normal attitude towards Russia has remained. Therefore, such proposals should not even respond. Our military in Armenia are the guarantor of security in the region.

We are in Yandex Zen
Day of the Armenian army. How the armed forces of Armenia were formed and developed
Caucasian affairs
22 comments
Information
Dear reader, to leave comments on the publication, you must to register.