Fidel Castro: Either justice will prevail, or there will be a catastrophe 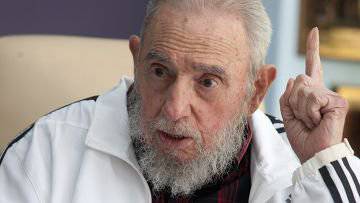 In recent years, the world community has not known a respite, especially since the European Economic Community, under the iron and tough leadership of the United States, decided that it was time to settle the score with what remained of the great states that, following the ideas of Marx, accomplished a feat and put an end to the colonial and imperialist orders imposed by Europe and the USA on the world.

In tsarist Russia, a revolution broke out that shook the whole world.

It was assumed that the first major socialist revolution would take place in the most industrialized countries of Europe: England, France, Germany and the Austro-Hungarian Empire. But it took place in Russia, stretching from Asia and northern Europe to southern Alaska, which was also part of the Russian empire, but was sold for a small amount to the state, which would subsequently make considerable efforts to strangle the revolution and destroy the country in which it happened.

The main feat of Soviet Russia was to create a Union capable of concentrating its resources and contributing to the technological development of weaker, less developed states, heavily affected by colonial exploitation. Does the modern world need a community of states that truly respects the rights, beliefs, culture, cares about technological progress and the preservation of the natural resources of those places that people like to visit so much? And wouldn't it be more fair that all modern people who in a split second communicate with each other, being at different ends of the planet, regarded the rest as friends and brothers, and not enemies, ready to destroy them by all means created by the human mind?

Based on the fact that people are able to strive for such goals, I think that they have no right to destroy cities, kill children, destroy homes, sow horror, hunger and death everywhere. Where, in what corner of the Earth can one find an excuse for such actions? If we recall that after the massacre of the last world war, humanity pinned hopes on the UN, then this can only be explained by the fact that a significant part of humanity assumed that it would solve these problems, although the goals of this organization were not clearly defined. A huge deception is felt today when problems arise that can lead to war using weaponsthreatening the very existence of the human race.

There are many unscrupulous individuals who consider their readiness to die, but, above all, to kill in order to preserve their disgusting privileges, as a special merit. Many are surprised to hear the statements of some European representatives of NATO, sustained in the spirit and style of the SS. Sometimes they even wear dark suits in the midst of summer.

We have a strong enough opponent - the USA, our closest neighbor. We told him that we would withstand the blockade, whatever the cost to our country. There is nothing worse than to capitulate in a war when the enemy attacked you without any rights or grounds. It was the feeling of a small people of an island nation. The rest of the governments of the Western Hemisphere, with rare exceptions, supported the powerful and influential North American empire. It was not some kind of our personal position, but the feeling of a small state, which from the beginning of the twentieth century was not only in political, but also in US economic property. Spain ceded us to this country after almost five centuries of colonial domination and innumerable human and material losses in the struggle for independence.

Washington reserved the right to military intervention in Cuba in accordance with the insidious amendment to the Constitution imposed on the puppet Congress, unable to say "no."

In addition to the fact that Americans owned almost everyone in Cuba: significant land, the largest sugar factories, mines, banks, and even the exclusive right to print our money, we were forbidden to grow enough grain to feed the population.

After the collapse of the USSR and with it the socialist camp ceased to exist, we continued to struggle. Our state and people will continue their movement along the path of independence.

I'm not going to dramatize this humble historical episode, but I just want to emphasize that US policy is ridiculously drama and will soon be in the dustbin of history. The Third Reich of Adolf Hitler, striving for world domination, found its inglorious end. A similar fate can befall the aggressive governments of NATO countries, which look like clowns in the eyes of Europe and the whole world. Soon, their euros, as well as the dollar, will turn into depreciated pieces of paper, which will depend on yuan and rubles, on a dynamically developing Chinese economy, closely connected with the scientific and technical potential of Russia.

Cynicism as a symbol of imperial politics.

As you know, John McCain (John McCain) was the US presidential candidate for the Republican Party in 2008. His name first became known when he was piloting his combat aircraft, which bombed the crowded streets of the city of Hanoi, was shot down by a Vietnamese rocket. The shell caught him in the midst of a combat mission, and the pilot, along with the plane, fell into the lake in close proximity to the capital of Vietnam.

One Vietnamese, a former soldier who worked near the crash site and witnessed him, rushed to the aid of a wounded pilot. While an elderly soldier was helping him, a group of Hanoi residents who were constantly raided aviationhurried to settle accounts with the killer. But the old Vietnamese convinced compatriots to abandon their intentions, explaining that the pilot is a prisoner, which means that he should save his life. The US authorities themselves contacted the Vietnamese government with a request not to cause harm to the pilot.

The Yankees are not just appealing to international standards in the treatment of prisoners of war - the captive pilot was the son of the Admiral of the US Navy, who played a prominent role during World War II and held an important post.

An important bird fell into the hands of the Vietnamese, and, waiting for early peace talks that would put an end to the unjust war imposed on them, naturally, they tried to make friends with the pilot. He, in turn, himself was glad of the opportunity to benefit from his adventure. Naturally, this was not told to me by the Vietnamese, and I would never have asked them about it. I read this, and it is quite consistent with some of the details that became known later. So, I once read Mr. McCain’s memories that while the Vietnamese tortured him, a prisoner, he heard that some people gave them advice on how best to do it, in Spanish. McCain claims that these were the voices of the Cubans. Cuba never sent advisers to Vietnam - the local military already knew their business perfectly well.

The Vietnamese general Zyap (Võ Nguyên Giáp) was one of the most brilliant commanders of our time. It was he who managed to place anti-aircraft guns and artillery in Dienbienf in the impenetrable jungle, which the American and European military believed it was absolutely impossible. Of their guns, the Vietnamese could shoot at the enemy with complete impunity, because the use by them of their terrible nuclear weapons could not affect the invaders - the troops of Zyap got so close. With their further actions, always associated with incredible difficulties, the Vietnamese forced the Europeans to capitulate disgracefully.

Sly fox McCain gained the maximum benefit from the military defeats of the American and European invaders. But President Nixon (Richard Nixon) was not able to convince his National Security Adviser Henry Kissinger to follow his idea, which he expressed to him in an informal setting: Can we throw off one of our bombs on them, Henry? However, the “bomb” suddenly exploded in the hands of the president himself, when his own people tried to spy on their political opponents. This was no longer tolerable!

And yet most cynically, McEin has always acted in the Middle East. Senator McCain is an unconditional ally of Israel and unequivocally supports all the dark affairs of the Mossad, about which his most fiercest opponents cannot even think. Together with Israeli intelligence, McCain took an active part in the creation of the “Islamic State”, which took possession of a significant part of Iraq and, allegedly, a third of the territory of Syria. This state is already receiving multimillion-dollar incomes and is threatening Saudi Arabia and other countries of this complex region, which produces the most significant part of world oil.

It would not have been better to fight for the production of more foodstuffs and manufactured goods, build hospitals and schools for millions of people who desperately need them, develop art and culture, fight mass diseases that kill more than half of the infected, educate professional health workers who could eradicate, finally, diseases such as cancer, Ebola, malaria, chikungunya, diabetes and other diseases that violate the vital functions of the human body?

Either the ideas of justice triumph, or there will be a catastrophe.