Is China a potential ally or an enemy? 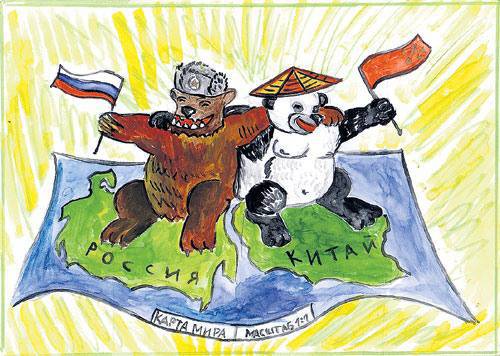 Russia and China have a long history neighborhood in which there were conflicts and mutually beneficial cooperation. And now the states have quite a few areas of activity where it is possible and necessary to cooperate or there is already active interaction. Thus, in the field of global politics, the PRC and the Russian Federation have the same positions with regard to the war in Libya. There are many common interests in the economic sphere, in the sphere of military-technical cooperation.


Beijing and Moscow have the same positions with regard to the deployment of the US missile defense system, which has mobile components (including the maritime component) - this is a potential threat to the Russian and Chinese nuclear missile potentials. The development of the possibility of a rapid global strike using non-nuclear strategic weapons and the deployment of strike weapons in space is of general concern. Russia and China have similar positions with regard to Afghanistan - they are disturbed by the possible scenario of spreading distemper to neighboring Islamic areas. Beijing and Moscow are against increasing pressure on Iran, both powers have their own interest there and the war of the West against the Persians is unprofitable for them.

The Chinese elite are well aware of their weaknesses and the weaknesses of other great powers. Their main principle at the present time is caution, they say, “let's wait and see”, and time is on the side of the Celestial. Every year, China is strengthening its Armed Forces, economic power is growing, the development of domestic infrastructure is growing, the possibilities of domestic demand are growing, the standard of living of huge masses of the population is rising. At the same time, the Western world is experiencing a lot of difficulties - the real crisis, financial and economic, social, national, etc. The leader of the West - the US is gradually losing ground to China in Africa, in the countries of the Arab world, in Southeast Asia, the Chinese Americans are stepping on their heels even in Latin America.

Beijing understands the fact that there are serious concerns in Russia due to the fact that in just two decades China has become a real first-rank power. And this is during the period when the Russian Federation is experiencing a lot of problems - demographic (especially dangerous is the fact that the largest demographic losses occurred beyond the Urals - in Siberia and the Far East), the decline of the armed forces, the strengthening of the economy’s orientation to the commodity sector, violation of food security, wear infrastructure, decomposition of the management body. The “Chinese threat” has become for many Russian citizens more dangerous than the traditional threat from the West. The real economic expansion of the PRC in Mongolia, the republics of Central Asia, the penetration of the Chinese into Ukraine and Belarus also causes concern. China actually occupies those niches where the USSR previously dominated.

For Beijing, Russia is very important - the state depends on the supply of resources, and most of them go by sea, sea communications are very vulnerable, so supplies from the Russian Federation are of great, strategic importance. Therefore, in the Celestial Empire, there are fears that if Moscow is finally reoriented to the West, the "European integration", the gradual inclusion in the structures of the North Atlantic Alliance, China will face the threat of complete encirclement. Indeed, at present in the western direction the situation is difficult - an old rival, India is increasing its defense power, in Afghanistan, the Islamists and the US bases. In the eastern direction - the whole enemy line of defense, Japan - South Korea - Taiwan - Vietnam - Philippines, which is supported by the United States. In the south there is also no calm and completely friendly regimes. Only the northern direction carries no threat. Therefore, in Beijing, very closely watching the US-Russian relations. The complete transition of the Russian Federation to the position of the Western world in the field of foreign policy carries the threat of complete isolation of China.

During the speech of Russian President D. Medvedev at the St. Petersburg Economic Forum, he stated that the parties plan to increase Russian-Chinese trade to 2020 billion dollars by 200 and noted that the energy sector will be one of the main areas of cooperation between Russia and China. Although during the talks an expected event - the signing of an agreement on the supply of Russian gas to China did not take place. The parties could not agree on the price of gas. The agreement provides for the supply of 30 billion cubic meters of gas from fields in Western Siberia for at least 30 years. At the same time, the question is being discussed of whether the Chinese side would provide Russia with an advance payment of several tens of billions of dollars.

On the threat to the Russian Far East

But this threat is rather an internal factor, not an external one - the main cause of which is the weakness of the Russian Federation. If Moscow pursued a purposeful development policy for the Far East, including a demographic policy aimed at increasing the number of the Russian population, there would be no question of a threat. It is clear that the Chinese elite, in the event of the collapse of the Russian Federation, will be forced to respond, including by including the eastern regions of Russia in their sphere of influence. And now China is more interested in the development of economic projects, reliable channels for the supply of resources for a booming economy. Even its demographic expansion is mainly directed to more southern countries, to the same Africa.

On the strategic union of Moscow and Beijing

With a coordinated foreign policy, Russia and China can create a powerful center of power that can help restore balance to the planet. After the fall of the USSR and the socialist system, the Western world actually became the master of the planet, which led to destabilization and the growth of conflict situations. Russia currently cannot compensate for this loss because of its weakness. Although China has risen strongly, it cannot alone oppose the West either. The PRC is surrounded by strong potential enemies, is economically linked with the West, but together the two powers could be a serious force.

There are already good examples of concerted actions by China and the Russian Federation with regard to Iran - the powers supported the UN sanctions and did not agree to Tehran’s full membership in the Shanghai Cooperation Organization. But at the same time "did not burn the bridges." In agreement, the PRC and the Russian Federation expressed their positions regarding the situation in Libya. There is a high probability that the actions of China and Russia would be able to stop the aggression against Syria and Iran. Participants in the recent SCO summit in Astana (the capital of Kazakhstan), including the PRC, condemned any unilateral programs to create missile defense systems.

US military programs, primarily the missile defense system and precision-guided non-nuclear weapons designed for a “fast global strike”, can serve as a good incentive for further rapprochement between Beijing and Moscow. In China, the United States took these actions seriously: the survival rate of the strategic deterrent forces is increasing, large-scale bomb shelters are being created for thousands of places, and the air defense system is being improved. For the time being, Beijing adheres to the concept of “minimal nuclear deterrence forces”, but the actions of the United States may force the Chinese elite to reconsider it, to expand the race of their nuclear weapons. The Chinese nuclear potential is less than the Russian one, and therefore for the PRC, American actions to create missile defense are more dangerous than for the Russian Federation.

Sources of:
http://www.27region.ru/news/newscat/rusnews/35160-peregovory-o-postavkax-gaza-iz-rossii-v-kitaj-sostoyatsya-v-koncze-iyulya
http://news.rambler.ru/10229642/
http://naviny.by/rubrics/economic/2011/06/20/ic_news_113_370437/
http://onolitegi.ru/index.php/2010-02-03-17-38-52/42-political-analyzis/119-chinese-miths.html
http://uch.org.ua/all/animal/2232-kitaycy-nashli-sebe-zhen-v-afrike.html
Ctrl Enter
Noticed oshЫbku Highlight text and press. Ctrl + Enter
We are
Preliminary evaluation of the prototype of the unobtrusive Chinese fighter Chengdu J-XX [J-20]Shield and sword
2 comments
Information
Dear reader, to leave comments on the publication, you must to register.