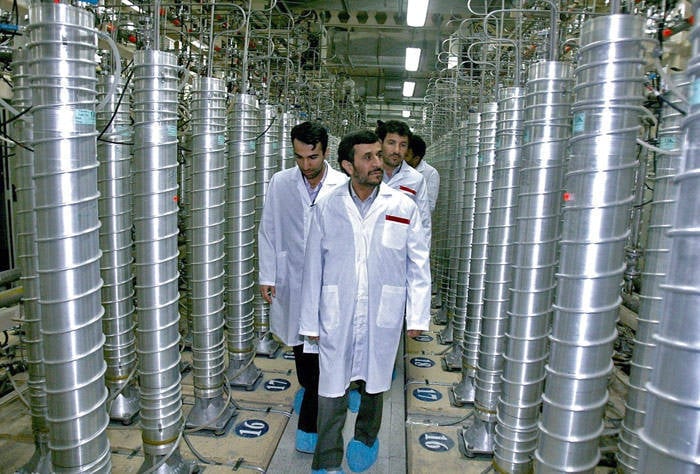 Iran has begun construction of new centrifuges. This is categorically contrary to the resolutions of the UN Security Council, which requires that work on uranium enrichment be suspended. Tehran plans to get twenty percent nuclear fuel as soon as possible and is not going to stop there.

The latest centrifuges have more power, reports AFP referring to the Iranian Foreign Ministry. They provide a very serious opportunity to expand the productivity of twenty percent uranium. Ramin Mehmanparast, the legal representative of the Foreign Ministry, told the IAEA in the course: “Our activities in the use of the peaceful atom continue in connection with the installation of faster and more efficient centrifuges. We notified the IAEA, which controls these actions. "

We remind you that Tehran officially announced its plans to increase the production of twenty percent uranium, in June two thousand and eleventh year. This type of fuel is used in reactors. (Iran claims that this type of fuel is required for the Tehran reactor, which produces isotopes for medicine.) The Iranian government plans to produce uranium enriched up to 20% at the Forda plant near the city of Qom. On the construction of which, the IAEA learned in September two thousand and nine.

Fereydun Abbasi, the head of the Islamic Republic of Iran, in June two thousand and eleventh year reported that the Ford plant plans to install one hundred sixty-four centrifuges. Judging by Tehran’s plans, enrichment can be completed in Natanz, after uranium production at Ford increases threefold. Since February of this year, in Natanz, twenty percent uranium has been produced, and before that, three and a half, percent, low-enriched uranium.
In the plans of the government of the country there is a question about the construction of ten concentrators.

Such plans are very concerned about Western countries, they doubt that this program will remain peaceful in the future.

Dossier in the Security Council

Due to the position of the European countries and the United States, the Iranian nuclear dossier was transferred from the IAEA to the UN Security Council. From this point on, the UN deals with the problem, and Iran seeks to return the file from the UN Security Council back to the IAEA, ratifying that the nuclear program, the inspectors, is open. A “six” mediators were created to discuss Iran’s nuclear issues: Russia, USA, China, France, Great Britain and Germany.

Two things worry the most today: the nuclear program and its nature, and the large amount of unused, low-enriched uranium in Iran. Since the IRI did not have advanced technology, the "six" of intermediaries, in order to remove the first question, in two thousand and nine years, offered to enrich uranium abroad in any enterprise up to twenty percent and then transfer it to Iran. The transfer of fuel and its conditions have been discussed for a long time and to no avail. Some details Tehran did not suit. Iran was afraid that uranium from the territory of the country would be withdrawn, and it would never receive twenty percent uranium. At that time, Iranian scientists had enough time to work and study enrichment technologies.

If the discussion of the problem does not move forward, Iran will again face sanctions (for refusing to comply with the requirements to halt the nuclear program). Therefore, an agreement was reached, but with Brazil and Turkey, and not with the "six". Ankara provided its territory for the exchange of fuel, and Brasilia began processing. In two thousand and ten, the sanctions were all the same imposed by the UN Security Council unanimously, without objection from China and the Russian Federation, although they usually opposed it.

In January, two thousand and ten, after some time, after the sanctions were imposed, Iran made an announcement that he would soon be able to produce what he needed, regardless of America and Europe, in connection with the creation of a full cycle of nuclear fuel. And he is not going to meet the requirements for suspending uranium enrichment production. According to Ali Asgar Soltanie, the Ambassador of the Islamic Republic of Iran, the fundamental position of his country is non-compliance with resolutions. And also, that their requirements have no legal basis.

Step by step (one on one)

Several times tried to resume negotiations. In January, two thousand and ten, was the last meeting in Istanbul. In a global sense, the country is ready to discuss the problem of the safety of nuclear production, but it prefers about its program, not to go too far, since everything is controlled by the IAEA and is peaceful.

In July of two thousand and eleventh year, Russian Foreign Minister Sergey Lavrov made some important statements. Moscow was interested in the imminent start of negotiations with Iran on the nuclear issue. And I fully agree with the proposals of the Six. Russia is categorically against new international sanctions. Russia doesn’t have any evidence of Tehran’s decision to build a nuclear bomb. The IAEA data will not be able to confirm that Iran plans to build a nuclear bomb. ” And no one can recognize the nature of Iran’s nuclear program as peaceful.

Ali Larijani, a member of the Iranian parliament, is far from being the “last person” in Iranian politics, saying that his country is fully ready to discuss their program. But he does not want to return to the previous form: “the six,” according to him, constantly drowns in suspicion and falls asleep with similar questions, making the discussion show. ” Larijani announced that the IRI is ready to conduct one-on-one negotiations, with which the subjects and purpose of the negotiations should be designated, which, according to the speaker in the format of the six, are not.

Just a week later, Iranian Foreign Minister Ali Akbar Salehi once again confirmed that the country would not give up the right to implement the peaceful atomic program.

Iran's spiritual leader Ali Khamenei said: that the full use of nuclear weaponswhether accumulation or manufacture is haram - that is, prohibition. Tehran also said that it was fully ready for negotiations with the "shlesyorka".

In mid-July, during the arrival of Lavrov to Washington, the topic of the Iranian atom reappeared. He invited his colleague Hillary Clinton to meet Iran in the form of step by step (one-on-one): sometimes give in, being satisfied with the slightest results, and take steps to get closer to the goal. The goal - to clarify issues established by the IAEA. Concessions for Iran means a partial exemption from the imposed sanctions.

The approach provided will help ensure progress from elementary questions to more serious ones. “We offer, at every demand from the IAEA, which is obliged to realize Iran, to draw up something like a“ road map. ” We consider it acceptable to take a step towards freezing and then, as we move forward, reduce the volume of sanctions, as a response to any definite, specifically definite, rather than declarative step of Iran, ”he explained.

Today, Iranian Foreign Ministry spokesman Ramin Mehmanparast said that Tehran will study these Russian proposals. But the text from the Russian Foreign Ministry has not yet been transmitted. This is reported by the Iranian resource Press-TV. Mehmanparast did not fail to report that his country's activities in the nuclear field “comply with the regulations of the IAEA and the NPT. It is entirely legal and formed as an Iranian nation. ”

On the so-called peaceful background of the peaceful conduct of a study of diplomats' proposals to the press, some information leaked out that Israel was supposedly ready to attack Iran in September, before the UN vote on Palestinian independence. In order for the topic not to be forgotten, in the media from time to time, messages about relations between Israel and the IRI slip through.

This time it was necessary to refute the report, Joseph Crowley, an employee of the United States Department of State: “Israel has no plans to attack Iran in the near future. The potential benefit still does not outweigh the damage from this operation. ”

It is difficult to disagree with Crowley: Israel has enough of its own problems with the Palestinians, with the uprisings of its neighbors in Egypt and Syria, and with alarming situations in Jordan. Tel Aviv needs to be engaged in a dense production strategy for all cases of creating events in the region. And most likely Iran will have to wait a little longer.
Ctrl Enter

We are in Yandex Zen
Iran: the road to war - or "last chance"?
Information War of the West against Iran
4 comments
Information
Dear reader, to leave comments on the publication, you must to register.