3 September 2014
15
The American government is confident that people are happy if the government gives them the right to life, freedom, and allows them to strive for happiness, subject to the consent of the electorate "to vote for idlers." Publicist Pascal-Emmanuel Gobry writes about this, adding that the government forgets: people want more and more awareness of national status, they want statehood. On the example of what is happening in Ukraine, this is especially clearly seen. 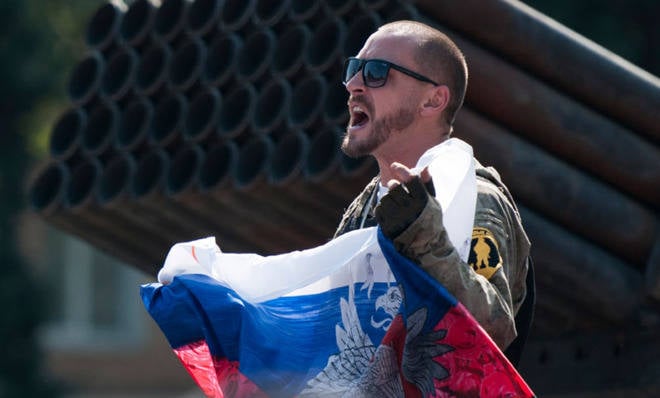 Pascal Emmanuel Gobry is an entrepreneur and writer from Paris. He writes for various popular publications: Forbes, The Atlantic, Commentary Magazine, The Daily Beast, The Federalist, Quartz and many others. 29 August his article on the Russian-Ukrainian issue was published in "The Week".

Already in the title, the central idea of ​​the essay comes through: the West must cede the east of Ukraine to Russia.

As Gobry points out, Putin’s Russia "seems to have finally launched its real invasion of Ukraine." Therefore, many “rightly outraged American lawmakers”, the author ironically, will certainly be ready to “stop Russia” (but “not at any cost”). Ukraine, the journalist writes with even greater irony, is “a sovereign state, and the invasion of sovereign countries is bad (unless you are the United States)”.

However, here, the journalist believes, the main thing is missing. The United States is blind to the issue of national status (nationhood), he said. In the US, it seems accepted to think that as long as people have access to “life, freedom and the pursuit of happiness,” which the government gives them (“and at the same time low taxes and the ability to vote for idlers”), they are “happy ". In fact, people want something else from their government: statehood.

This concept is quite complicated. Every nation defines it for itself, and often “implicitly,” the author believes. For some countries, statehood is closely intertwined with ethnicity. Other countries associate it with the territory. Others focus on language, culture and history. Most of the countries, the journalist continues, conclude in this notion a “mysterious combination” of all the listed elements. And here the author notes that the USA is almost the only country that believes (at least officially) that its statehood is fundamentally determined by a “set of legal norms”.

Meanwhile, Gobry says, peoples have a soul, desires, fears and want unity. That is why Charles de Gaulle never mentioned the name "Soviet Union", but said: "Russia". He believed that the Politburo did not adhere to a real communist ideology, but rather acted on national interests. As for Stalin, he did only what Peter the Great would have done in similar circumstances.

American blindness in the important issue of statehood has created a catastrophe in the form of war in Iraq. The problem with the American government is that Iraq has never been a nation. The Iraqis were not happy to receive "life, liberty, and the pursuit of happiness," because they were not one people. Iraqis are an “agglomeration of nations” and a religious mixture of Sunnis and Shiites. And there are also Kurds. Now, many people understand that Iraq is a kind of state fiction, but in fact a free "confederation of autonomous Kurdish areas, as well as Sunni and Shiite enclaves." It took ten years for the US government to shed Iraqi blood to finally learn this basic historical rule, the author writes.

All this brings us to Ukraine, the journalist continues. “Ukraine is a nation?” He asks. Well, yes, there is such a nation, he answers himself (although, somehow, hesitantly). But the problem (“as it often happens in Eastern Europe”) is that “although there is a Ukrainian nation, the borders of the state of Ukraine do not coincide with it”. The journalist is in a hurry to add that this, of course, is a “gross simplification.”

He lays out Ukrainian solitaire like this: the inhabitants of the western part of the country are largely “Ukrainophones” (and not Russian-speaking), they are pro-European and pro-Western-minded people. Ukrainians from the eastern part of the country are mostly Russian-speaking and pro-Russian. The Crimea peninsula has historically been a part of Russia (since the 18th century, the journalist reminds) and was given to Ukraine by Khrushchev (Kruschchev), which was "a completely symbolic gesture, since Ukraine was under the control of the Soviet Union." “The election of Viktor Yanukovych as president in 2010,” writes Gobry, “proves that Russophilism has real popular support in Ukraine and is not organized by Moscow’s machinations.”

The “Ukrainian crisis” the West has been observing for ten years now - since the Orange Revolution 2004. And every winter the battle is “flared up” because of the gas issue. In fact, there is a broad national struggle: two people are fighting among themselves, being in the same team, in one state, and each people are pulling the cart towards one of the two main blocks of the European continent.

As for the USA and the EU, they have shown incompetence over this decade, the author gently notes. If they were competent, the EU and NATO would create their institutions in Ukraine so that they could resist Russia, or at least they could tie Ukraine to the Western bloc. But now it's too late.

Just like in Iraq, this crisis will continue for another decade or more. It will continue until its cause is eliminated. Ukraine today is a “two-nation-in-one-state”. Many Ukrainians feel Russia as their home, and many want their country to become part of the Euro-American West.

What conclusion does the publicist make?

The answer is clear, says Gobry. The West must come to an agreement with Russia, as a result of which Ukraine will be divided into two parts. Russian-speaking areas will join Russia. And this is not at all a “concession for fear of Russia,” since “many in the Kremlin” would not want such a deal. After all, the entry of even the “remnant” of Ukraine into NATO will mean the end of Russia's ambitions beyond its state (at least in the foreseeable future), and Russian politicians are very keen to have a “buffer” between Russia and the NATO countries.

The best offers, the journalist summarizes, are those in which “both parties get more than they expected.” True, for this and have to give more than provided. Therefore, a solution of this kind would be difficult for Washington, Brussels, Kiev and Moscow.

Recall in conclusion that many analysts and political analysts had previously spoken about the split scenario into two parts of Ukraine. However, the United States, the European Union and “official Kiev” invariably declared the “territorial integrity” of Ukraine and the inadmissibility of encroachments on its sovereignty, and Kiev politicians have not yet retreated from the idea of ​​“returning Crimea”. Western sanctions against Russia are a complete contradiction of the idea voiced by the writer from Paris.