The US war against the European Union is fought by Europeans and at the expense of Europeans. 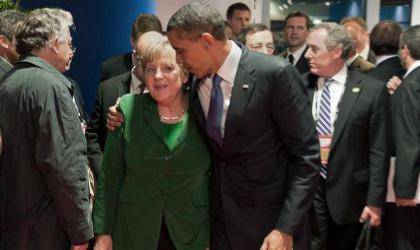 No matter how European politicians cover with beautiful words about defending democracy, preserving the “territorial integrity of Ukraine” and opposing “Russian aggression”, it is clear to any person versed in politics that these are just words, nothing more. What kind of democracy can we talk about when the current regime in Kiev came to power as a result of an armed neo-Nazi coup d'état, dissenters are being persecuted and physically destroyed in Ukraine, and censorship called “a moratorium on criticism of the authorities” introduced in the media? “Protecting territorial integrity” is expressed in support of the massacres of thousands of civilians from the two regions who spoke out at the referendum for independence. Recall that no one held a referendum in Kosovo, but the independence of this country was immediately recognized by both the United States and the EU countries. No matter how hard the intelligence services of the United States, Ukraine, and Europe tried, they didn’t find any evidence of Russia’s support for the Donbas rebels, but Russia repeatedly showed evidence of shelling of its territory by the Ukrainian military and even their armed invasion of its territory.

Any thinking person understands that with the hands of the leadership of Ukraine and their agents in Brussels, the United States is at war for the complete subordination of Europe to itself. It is for this reason that a lot of efforts are being made to demonize Russia, to provoke it into direct intervention in the Ukrainian conflict, which would prove the thesis of "Russian aggression" invented in Washington and spread to Europeans.

No one disputes the Marxist thesis that war is the continuation of politics by other means, and politics is the concentrated expression of the economy. It was thanks to the two world wars, which took place mainly on European territory, that the US economy received a powerful impetus, and the European economy, which was on the eve of their power, turned into ruins, and Europe fell into dependence on America. Over time, American strategists have learned how to wage bloodless, but no less destructive financial and economic wars, one of the characteristic manifestations of which is the current economic war, the aim of which is the new destruction of the European economy so that it again becomes completely dependent on Washington.

The impetus to the beginning of the next stage of the US financial and economic war against the EU was the intention of the leading European countries to re-industrialize. During 1980-2000-s, Germany, France, Italy, not to mention the countries of the former socialist camp, gradually reduced production capacity on their territory, reorienting the economy from industrial production to the service sector, as well as increasing the role of the financial and insurance sector. But by the beginning of 2010's, it became clear that such a policy would leave Europe without a future, and European politicians started talking about the need to revive the industrial potential of their countries, which created a threat to American manufacturers.

Any increase in production capacity is impossible without increasing the consumption of energy, energy products. Adopted at the insistence of the United States, but the Kyoto Protocol they have not ratified by them on the reduction of industrial emissions of greenhouse gases due to the development of new technologies, has already prevented the future growth of European industry. To thwart European plans, a series of state coups in the countries of the Middle East were organized by American experts on “color” revolutions. For the most part, the regimes loyal to Europe were replaced by radical Islamists hostile to European civilization. Although the fundamentalists who came to power, they are even more negative about the United States, but not the States, but the EU states have become hostages of radicals in matters of oil and gas supplies. At the same time, the American special services, which nurtured these Islamist movements and organizations, continue to cooperate with them and influence them.

But the main flow of energy to Europe comes from Russia. How to cut it off or constantly keep supplies under threat of disruption was tested during the Ukrainian-Russian "gas wars" of 2006-2009. The drive to power by a coup d'état of political forces capable at any moment under the pretext of counteracting Russia to turn off the tap for Europe was one of the goals of the organization of the Maidan by the Americans.

However, the coup d'état, prepared by the American embassy for the presidential election of 2015 of the year, but accelerated by necessity, was a reaction to the failure of another plan to weaken the EU, called the Association Agreement between Ukraine and the European Union. The terms of this Agreement provided for such devastating consequences for the economy of Ukraine that, literally in a year, Europe would have to invest huge amounts of money in saving Ukrainian statehood. Recall that the United States became the most active lobbyists for signing the Agreement, as well as their “fifth column” in the European Union - Poland and the Baltic countries.

But the "sanction wars" with Russia became the "star hour" of undermining the European economy. It was under US pressure that Brussels joined the sanctions, which have already led to stagnation in the EU as a whole. The fall in GDP of Germany and Italy has already reached 0,2%, and the projected fall in this indicator for the Baltic countries may reach 10%. And this is without taking into account the retaliatory sanctions of Russia, which have threatened the existence of entire industries of some European states.

An analysis of the third package of sanctions adopted under US pressure makes it possible to judge that their main focus is not at all complicating the lives of Russian officials and financial-industrial groups associated with the state. The main thing is to ensure guaranteed technological lag of the Russian oil and gas industry and complicate the supply of Russian energy to Europe. In other words - the creation of artificial obstacles to the re-industrialization of Europe.

European experts have already expressed their opinion: there is no alternative to the EU states for the next decade for Russian gas. And the adopted sanctions create threats not only to increase supplies, but even to preserve their volumes. That is, yielding to the persuasions of Washington, the Europeans with their own hands created a situation when their plans to restore the industrial potential would not be implemented. The EU provided at least its own loss in the competition with the United States, and the maximum was falling into economic dependence on America, as happened at the end of two world wars, when the Europeans destroyed their industrial power with their own hands.

Of course, just like after the world wars, Europe will eventually restore its economic power, which it also destroys in order to satisfy US interests. But for a couple of decades, Europeans will have to put up with a subordinate position and not at all the expected standard of living of the majority of the population.