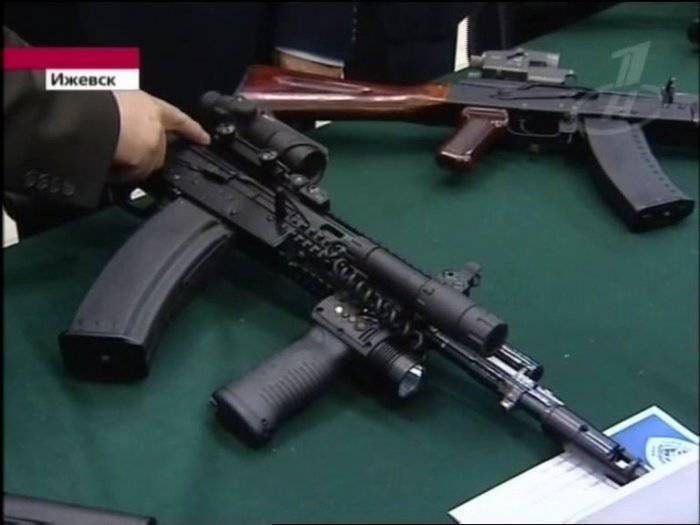 About the new machine it is known that the 200-i series will have an advantage in the efficiency of use compared to previous models on the 40-50%. As follows from the statement Grodetsky, the new machine will have a bar that is designed for mounting additional equipment - laser sights, sights and a flashlight.

The upgraded Kalashnikov with 74 marking and 5,45 caliber of millimeter has a side-folding plastic butt and dovetail bar, which is designed for mounting optical sights. The AK-74M rate of fire is within 600 rounds per minute. This machine was adopted in the 1995 year.

Next, we give two views, two positions on this world-famous machine gun. The first look at the machine will be a review of the modified "Kalashnikov", which were produced by the American company Krebbs custom guns. An order from this firm was made, still unknown, by entrepreneurs from Iraq. The second glance will be the local Izhevsk automaton, the consideration of the models will be supplied with comments by Comrade. Fox. Mentioned comrade. Lees was a member of the Afghan company and worked for a long time at the Rzhevsky training ground.

Regarding the Kalashnikovs produced at the Izhevsk plant, there were no comments, but the silence was significant.

Some picattini planks have been added to the automatic machine, the handle has been made more or less ergonomic, a safety device has been added under the thumb of the right hand, which, unfortunately, is not connected in any way with the standard safety device-translator, but simply locks the trigger. 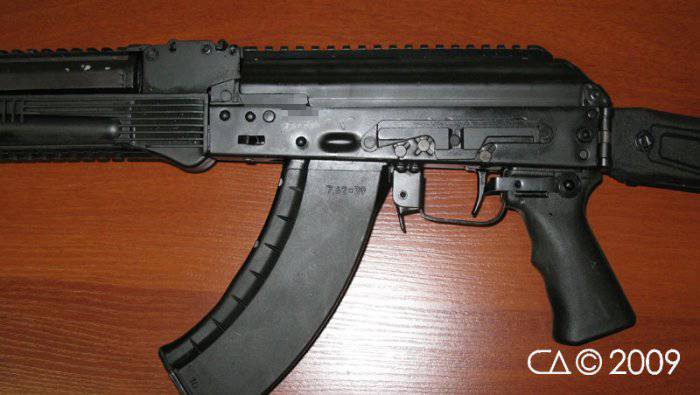 The machine is made simple and probably a little rough, as they say, on the knee assembled. The production of such products is permissible for a small company that creates its own models in small premises and does not have competent personnel. However, for a factory developer, this is simply unacceptable. It should be noted normal and rather rigid landing of a level on a gas outlet tube. 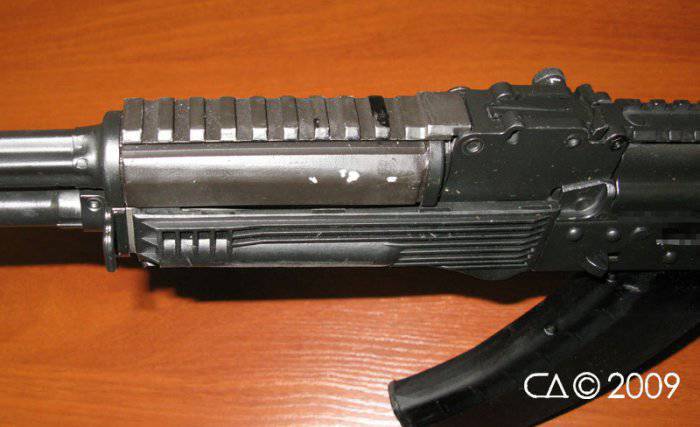 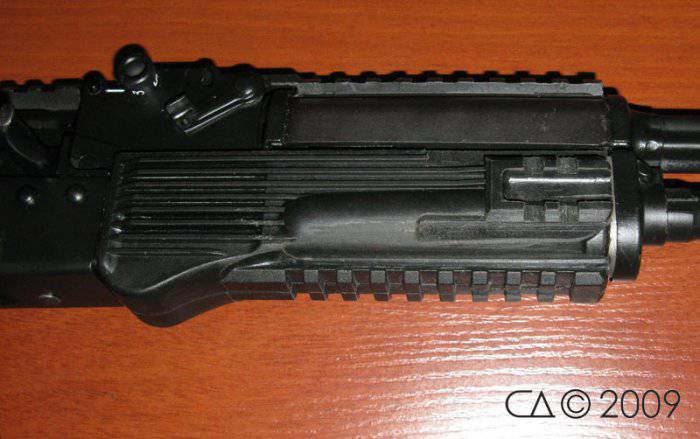 The cover of the receiver, which is located on the other side of the ledge in the front part, is mounted on the axle, and in the rear part there is a contactor, somewhat resembling designs on the SVD or Valmet. 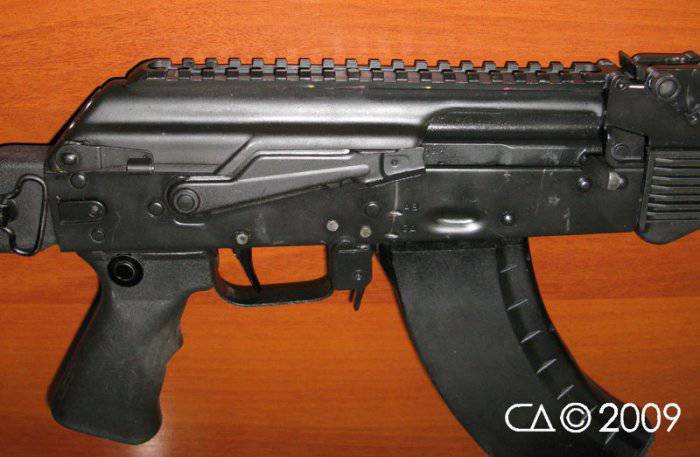 In the aggregate, this should ensure uniformity of fit of the receiver cover after opening. Most likely, this design eliminates the need to verify the sights installed on the cover plate each time after cleaning. On the bar are colored dots that indicate the seats for sights of different types.

Landing the cap on the axle was made possible by the redesigned assembly of open sights. The automat block remained the same, but the bar was shortened and the drum with an eccentric was put in place of the clamp and the curved sector. In this regard, the bar has become shorter and the opportunity to install the hinge of the receiver cover has become available. 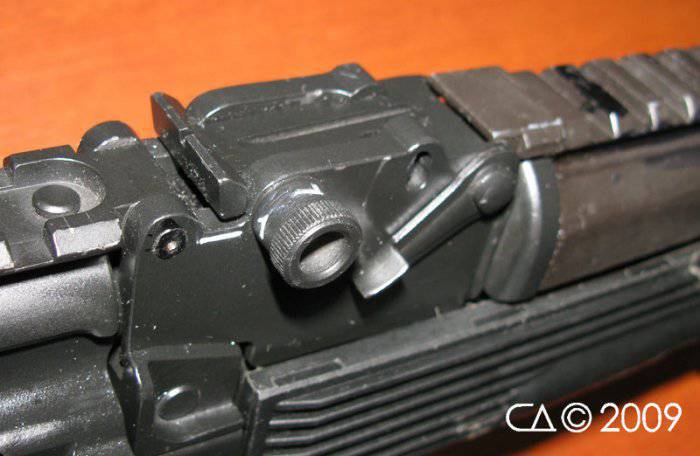 The new model has a ramrod in the butt. In addition to the butt added antabka. 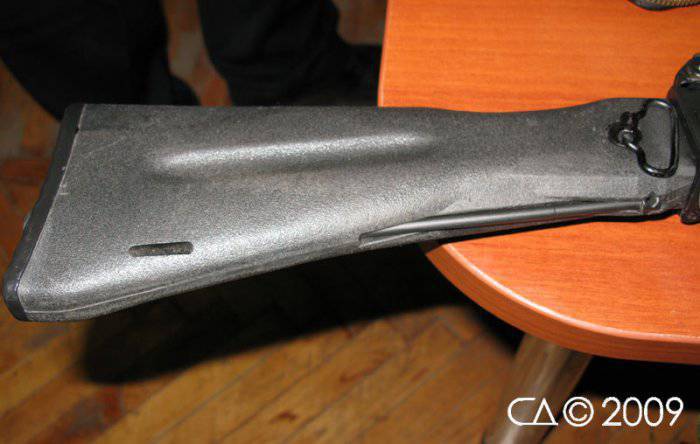 It is necessary to distinguish between the desire to correct the shortcomings of the AK and the desire to make of the machine only the external similarity of foreign Masad, AR15, Stg552. Based on this, and need to develop future models.

For example, the company Krebs, creates exactly the external similarity of AR15 from AK and this is due to the nature of the demand in the American civilian market.

It would be appropriate to recall the words of Gabe, Suarez: “no need to make an M16 rifle from AK”. This quote suggests that you should not confuse the purpose and technology of different types of weapons. It should not be added to Kalashnikov, heavy non-ergonomic body kit, just for the view.

What are the fundamental flaws over which to think in the new millennium, does AK have?

So, let's take a closer look at each item.

The accuracy of solitary fire. This item is determined not so much by the defects of the model as by poor-quality production, since it is possible to find both heap and very dull copies. So the whole thing in the quality of factory production, which needs to be improved.

Recoil and toss. Changing the mass of moving parts, caliber or scheme of work of automation, will lead not to improvement, but to the creation of a new rifle. To reduce recoil and toss it is necessary to use active and reactive muzzle devices to reduce recoil. These devices are well developed in the Russian FPSR, and many are used on 7.62 machines. Therefore, the introduction of an optimal compensator in mass production is the best solution.

Installing optics. Since AK46-1 “turned over” and acquired a classic layout, this issue is problematic for AK. However, this problem can be solved, but for the solution it is necessary to understand which optics will be used. The most optimal are the Aimpoint T1 and Aimpoint H1 collimators, the latest versions of EOTech (but they are inferior to the previous ones in terms of size and power consumption). How to install such a sight? The answer is clear - an ultimakovsky gas outlet is needed, and in order to make an Ultimak analogue of steel, only desire is needed. Thus, you can get the sight, which is located on the sighting line of mechanics and through which you can see the mechanics. At the same time, the installation of a flashlight is a completely solvable question, the solution is, for example, installing a flashlight on Ultimak using a VTOR adapter.

Absolutely incomprehensible maniache, with which a whole modern world hangs Kallachnik rails. For what? Do you have so many optics with Pikatinievsky mount? Or are you going with the help of an adapter with a dovetail to hang on AK Hyperon? Or, even funnier, Cobra on the Weaver, which has overall dimensions and power consumption of Tefalev iron? Damn, how to ruin the brain, better pack up Eympoint, anyway, at the cost of maintenance and the percentage of marriage it will be cheaper than the Cobra, especially since 15 of Eympoints is taken for the cost of one Hyperon !!!

Native handle fire control. There is evidence that the fighters of the Special Forces UFSIN UR have made ergonomic handles made of wood for themselves for quite some time, and this says a lot. In fact, this issue does not require any “revolutionary transformations” of the structure and such things. It is enough just to put commercial handles into production. At the same time, the installation of such handles (Russian, Israeli or American) takes a small amount of time, and the costs are not large. However, the benefits of this innovation, in terms of using AKs, can be substantial.

Neck and slide lag. These are things that are needed for sports, but in order to use this in order to arm the army, you will need to change the store format, which has remained unchanged for over 60 years. It becomes clear that such costs are not entirely reasonable, of course, you can redo the machine for the NATO standard, copy Masadovsky stores. However, it is unlikely for anyone to think of buying such a modification of Kalashnikov, with a converted store, the cost of which will significantly exceed the cost of existing models.

Butt. The idea of ​​placing a ramrod in the butt may seem quite interesting, but this is not a mandatory innovation. The existing black stock AK100 is self-sufficient, it is universal and does not require add-ons. Such as, for example, the slot under the strap of the butt plates GP30, which do not yet exist as such.

Fuse. It is the sacred cow of modern tactics. The standard lever can be used at a fairly high speed. If you use a fuse with a flag similar to Boar-12, then the removal speed will be at least not less than that of the AR15 fuse. Probably no more innovations are required. However, improvements with a fuse on the left side and the action of the reverse natural movement is another attempt to rework the AK in AR15. In fact, the fuse is not so often used and most needed to carry a weapon, so a normal switching speed is an ample option.

Mechanics. This item is the last in the list, but not the last. It is worth noting that when shooting at dusk or the rapid transfer of fire, the AK strap works and, at the same time, at a sufficiently high level. In this case, a tritium insert in the Kalashnikov front sight, for shooting in low-light conditions, can become a fully justified and practical addition. At the same time, the cost of 70 dollars on Brounels allows everyone to use this option. For the mechanics of the machine does not need research and a huge number of slats, as well as there is no need for enhanced locking the receiver cover. Some additions are superfluous, it should be considered.

In conclusion, it should be said that although the new Kalashnikov looks quite impressive in the photo. In fact, it does not have any fundamental differences from its predecessors. It implemented not a large number of innovations. In particular, it is a modified ergonomics. The left-hand crank on the left and the current fuse are quite controversial.
Ctrl Enter
Noticed oshЫbku Highlight text and press. Ctrl + Enter
We are
Polish "relatives" Kalashnikov assault rifleYugoslav "relatives" Kalashnikov assault rifle
130 comments
Information
Dear reader, to leave comments on the publication, you must to register.