NATO continues the tradition of the Crusaders and Nazi Germany 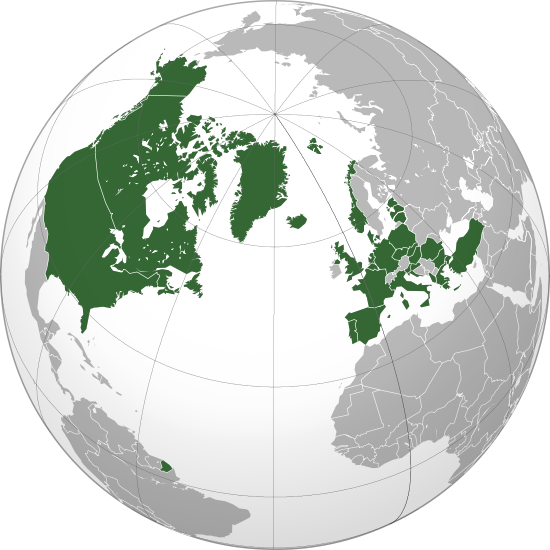 The organization of the North Atlantic Treaty is a direct successor to the ancient concept of "the onslaught to the East", being the heir to the crusaders and the Nazis. This fact is difficult to dispute, judging by deeds, and not by words that can be full of nobility and beauty. After the collapse of the USSR and the Warsaw Pact, the North Atlantic bloc set itself the task of expanding to the eastern part of Europe, as well as to the lands of North and Tropical Africa.


Although after the destruction of the Red Empire and the world socialist system, many believed that the need for NATO disappeared because the enemy fell, the “evil empire” (in the eyes of the Americans) collapsed, and its heir - the Russian Federation, showed complete loyalty to the “New World Order”. Handing over all achievements of the USSR, allies, withdrawing troops, throwing bases and property, showing complete indifference to tens of millions of Russians abandoned outside Russia. Reducing the army, fleet, abandoning the most interesting developments in the military and space fields. But the “Russian question” has not yet been completely resolved, and in the Western World Management Centers indifferent to what Russian power is: tsarist, Soviet, democratic, the question is who is the “king of the mountain”, the owner of the planet. And for this you need absolute control over the North of Eurasia and the destruction of the power of the Russians - there are too many of them, God forbid, they are descendants of Sun Falcon, Svyatoslav, Alexander Yaroslavich, the “miracle heroes” of Suvorov and Ushakov.

That is why NATO was retained as a tool of military coercion in the “New World Order” of Western civilization. A new life has been breathed into the unit, with a “club” with the help of which they began to impose the will of the American-European “axis” on various countries of the planet, including those located far beyond Europe and North America.

The expansion of NATO to the east and south was accompanied and accompanied by the involvement of new members in the bloc: in the 1999 year - Hungary, Poland, the Czech Republic were included; in 2004, Bulgaria, Slovakia, Slovenia, and the former Baltic republics of the USSR — Estonia, Latvia, and Lithuania; in 2009, Albania and Croatia. In the 2009 year, France returned to all NATO structures, which left them in the 1966 year under General de Gaulle. Of the former USSR republics, the “elites” of Georgia and Ukraine show a great desire to join NATO. It is clear that militarily, NATO did not strengthen NATO, their military power is mediocre, the main thing is that these countries used to be part of the Russian civilization, or were under its control - economic, political, military. We lost the vast territories after the death of the “red project”. In addition, the bloc constantly launches various programs: Partnership for Peace, Istanbul Cooperation Initiative, Membership Action Plans, Mediterranean Dialogue, Individual Partnership Action Plans, created the African Command of the US Armed Forces (AFRICOM) . And do not think that these programs do not pose a danger to other countries, Russia - so Gaddafi was against Libya’s involvement in the AFRICOM network, this was one of the reasons for the aggression against his regime, which showed great independence.

During their movement, politicians representing the bloc in the international arena quietly lying, anyway history will write the winner. So Madeleine Albright, US Secretary of State in 1997 — 2001, when pushing the decision to admit the Czech Republic, Poland and Hungary to NATO, lied that military bases and troops of the North Atlantic Alliance would never appear in these countries. Interestingly, many American politicians of their ethnic origin are natives of Eastern Europe - like M. Albright and Z. Brzezinski, while being real Russophobes. It was not the only lie, as the Clinton administration (US president in 1993 — 2001) promised that the alliance would never include states that directly border with Russia. It is clear that in Washington they were not going to fulfill these promises: in less than a decade, the US announced that a missile defense system radar would be deployed in the Czech Republic, and anti-missiles and an air force base in Poland.

NATO was admitted to countries that bordered on the Russian Federation; in 2004, Estonia, Latvia and Lithuania bordering on Russia entered NATO military bloc. Then, thanks to the “Plans of Action for Preparing for Membership”, Kiev and Tbilisi became active candidates for joining the bloc, have a chance to join the bloc and the three Balkan states that were part of a unified Yugoslavia - Macedonia, Montenegro, Bosnia and Herzegovina and partially recognized Kosovo. Signals that they have a chance for a full "European integration" and entry into NATO have been received by Serbia, Moldova and Belarus. Naturally, reciprocal steps are expected from these countries, especially for Belarus, Serbia is already successfully following this path - the army is "optimized", the heroes have passed in The Hague, now we must recognize Kosovo - the "heart of Serbia", independent.

The organization of the North Atlantic Treaty in 1999 repeated the "feat" of Nazi Germany - a few weeks aviation block struck at Yugoslavia, Belgrade. From 2001 to the present, NATO forces have been conducting military operations in Afghanistan, and the alliance’s area of ​​responsibility has also covered part of Pakistan’s territory, and the bloc’s bases appeared in the states of Central Asia that were formerly part of the USSR.

In 2008, in the capital of Romania - Bucharest, the NATO summit was held, there a number of states opposed the admission of Ukraine, Georgia and Macedonia, and the growth of the bloc stopped. But the development of the programs of the block and the development of its military infrastructure all over the planet did not stop. In addition, non-member countries of Europe were offered the option of “associate membership”. There are proposals to amend Articles 6 and 10 of the NATO Charter: Art. 6-I clearly indicates that the areas of responsibility of the North Atlantic Alliance are the territories of European countries and the USA and Canada, French Algeria, as well as the lands of the islands under the jurisdiction of NATO member states in the Atlantic Ocean north of the Tropic of Cancer; Art. 10-I says that only European states can claim the role of new members of the bloc.

Changing the 6 and 10 articles would solve a number of problems. Thus, within the framework of the “Mediterranean Dialogue”, a program of individual cooperation between NATO and Israel operates. For Jerusalem, this is a step towards NATO membership, which is a long-standing desire of the Jewish political elite and the Jewish lobby in the United States. In addition, the program laid the foundation for associate membership in the alliance of such Arab countries as Jordan, Egypt, Tunisia, Morocco, Algeria, and Mauritania. If the Western Alliance's campaign against Libya is crowned with victory and the rebel Transitional National Council, which is supported by NATO, seizes power in Tripoli, virtually all of North Africa will fall into the sphere of associate membership in the bloc. It should be noted that even under Gaddafi, who bent his line, Libya had observer status in the Mediterranean Dialogue system.

Another program for the "onslaught to the south" was adopted in 2004, at the NATO summit in Istanbul, the mechanism of the so-called. The Istanbul Cooperation Initiative was used to provide NATO movement to the Arabian Peninsula. Kuwait, Oman, Bahrain, United Arab Emirates joined this program. Saudi Arabia and Qatar also do not interfere with the actions of NATO, but rather on the contrary, these same countries supported the aggression of the Western coalition against Libya. They participated in the KFOR mission (Kosovo Force) - an international force led by NATO, responsible for ensuring stability in Kosovo. These same countries are active buyers of American and European weapons, actually being in full technological dependence on the Western world. In addition, Eric Prince, the creator of the notorious private military company Blackwater, founded in Abu Dhabi (the capital of the United Arab Emirates), with the full support of the Arab government, the private military agency Reflex Responses (R2), the American specialists are preparing a special battalion. Its main goal: the suppression of possible uprisings, anti-terrorism activities, ensuring the internal security of the state.

The leadership of the North Atlantic Treaty Organization, including the previous and current secretaries-general of the bloc, Jaap de Hoop Scheffer and Anders Fogh Rasmussen, has repeatedly proposed to expand the area of ​​responsibility of the alliance beyond the limits adopted by the charter. To this end, it is proposed to use the Partnership for Peace program and the NATO partnership programs with individual states. The status of states associated with the North Atlantic Alliance can be obtained by states that are part of the Western system, being allies of the United States - Australia, New Zealand, Japan, South Korea. It is also possible that India, Brazil and South Africa will receive such status. In addition, Scandinavian states are increasingly cooperating with NATO: there is talk in Finland and Sweden that it is time to change the neutral status, to participate actively in the affairs of the bloc. Sweden would be a real boost for NATO - the state has a small but well-armed and trained army, a powerful military-industrial complex. Stockholm took part in the war with Libya. It is clear that for Russia the entry into Finland and Sweden into NATO, their active cooperation, including in the Arctic, will be a very unpleasant event.

As a result, we can say that NATO embodies the dreams of Adolf Hitler - the former parts of Russia, or part of the North Atlantic Alliance, like the Baltic, or dream of becoming them - Ukraine and Georgia, or have military bases on their territory (or have plans) block. The bloc is turning from regional to global, which is building the “New World Order” and there is no place for the Russian people.

We are in Yandex Zen
Military reform as an integral part of the security concept of the Russian Federation: Systematic dynamic assessment
On the other side of the "red" and "white." Report Izborsk club
10 comments
Information
Dear reader, to leave comments on the publication, you must to register.