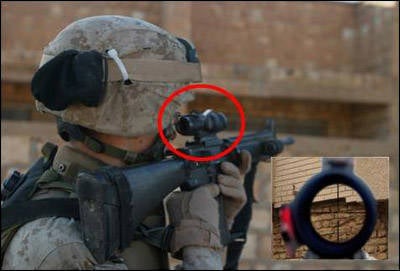 Technologists from Lockheed Martin are finishing the development of a fundamentally new sight, thanks to which shooting will be carried out with amazing accuracy. The sight, created on the basis of electronic technologies, will allow you to get a dynamic vision of the target (DInGO), as well as hit it at a distance of 1-600 meters as accurately as a professional sniper does.


At the moment, the Pentagon, satisfied with the speed of the project, has launched the integration phase of a high-precision optical sight and M4 and M16 rifles, which are in service with the American army.

The key feature of the DInGO sight is the variable magnification, with the field of view changing depending on what the distance to the target is. This automatic sight feature allows fighters to use their personal weapon as for effective shooting at a long distance, and in melee. Lenses with low power consumption and variable configuration were used to create DInGO. The work also needed lasers and compact displays. To hit a target, a soldier does not need to make any extra movements: change lenses, make corrections for wind, range, multiplicity. It is only necessary to put the machine at the target, and the technician will do everything else independently, having calculated the point of impact, adjusted the point of view, and mixed the crosshairs. In the near future, this scope will be included in the Pentagon’s state order, and its cost will be significantly lower than the existing solutions. So, if the aiming complex of the XM-25 grenade launcher costs about 25 thousands of dollars, then DInGO - just 600 dollars (in batches of 50 thousands of units and more). Using two finger batteries to provide power, the sight can work continuously for eight hours. This is quite enough for use in the seven-day military operations, which previously was simply impossible.
Using DInGO, any soldier, even the most unprepared, will feel like a sniper.

The accuracy of the shooting of the soldiers of the American army will increase significantly, helping to gain an advantage over the enemy, who can not conduct high-precision fire at a distance of 300 meters or more. The idea of ​​creating DInGO was preceded by the unsuccessful experience of fighting in countries such as Afghanistan and Iraq, where soldiers of the American army were fired from 300-800 meters of small arms. Traditional machine guns used by the soldiers did not provide sufficient accuracy over such a long distance. To counter shelling from a long distance, many units were reinforced by experienced shooters, who have in their arsenal high-precision semi-automatic rifles. And although these "semi-snipers" could work in combat fairly effectively, the rest of the unit remained simply out of work. In the melee, the alignment of forces changed: arrows with an optical sight could not conduct effective fire, since their weapons were not adapted for this. Thanks to DInGO, the army will be able to more accurately hit targets at both large and small distances. When the integration of the sight and rifles, which are in service with the American army, will be completed, the device will be adapted for operation during combat service.
Ctrl Enter

We are in Yandex Zen
Automatic cargo vehicles facilitate soldier labor on the battlefield
Lockheed Martin is preparing a revolution in energy. Russia does not believe in it
14 comments
Information
Dear reader, to leave comments on the publication, you must to register.