2 September 2014
44
CIA analysts predicted a couple of years ago that 2040 will mark the year as a border date, after which, in all its horror, the global problem of water scarcity will open. In 2013, OECD experts “brought closer” a terrible date - they moved it to 2030 year. According to them, by that time 47% of people will live in zones with water deficit. Finally, it is believed that water deficiency threatens the planet in ten years. 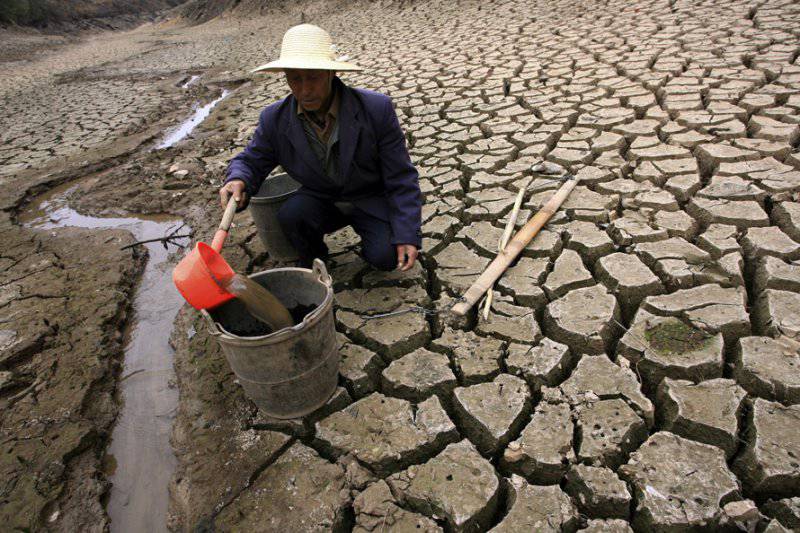 Here is a quote from a fresh message on the portal gezitter.org:

“Residents of the Panfilovsky district of the Chui region oppose the development of the gold deposit in the Cholok-Kaiyndy valley.

On August 28, they blocked the Bishkek-Chaldybar highway for several hours, demanding the termination of Redmet's activities, stating that gold mining would lead to water pollution.

Regional police counted 300 participants of the action, and the participants claimed that they were around 1000. One of the organizers of the protest was Nurgazy Kayypbaev - a resident of the village of Bukara from the ayyl okmotu of Voznesenovka, Panfilovsky district. According to him, the entire ayil okmotu uses the river that flows from the Chon-Kaiynda valley as drinking water. If gold mining begins, the water will be polluted ... "

See you Gold is nothing where water sources are scarce.

But another message from the media, also from Central Asia.

Kyrgyz news agency "24.kg" quoted the words of Askarbek Toktoshev, the head of the state agency for architecture, construction and housing and communal services, told at the meeting entitled “Open dialogue on clean drinking water”. Mr. Toktoshev spoke about the availability of safe water for the rural population.

If we move from Central Asia to China, it will become clear: the Chinese will not tolerate water shortages. Access to the swamps and the columns of the neighbors is not the bright future that draws in front of the inhabitants of the Celestial Central Committee of the CPC.

25 August "Russian newspaper" An article by Leonid Yuriev appeared, which tells about a Chinese project on the diversion of rivers, started for the sake of fresh water.

The observer recalls that China completed the construction of a central route for the transfer of rivers from the south to the north of the country in May. The network of channels will begin to be operated in October. Over a hundred Chinese cities will additionally receive 9,5 billion cubic meters of water annually.

The arid northern regions of the People's Republic of China used to solve the problem of water shortage, the author of the material reminds us of "the merciless exploitation of groundwater." However, such pumping of water has created a number of environmental problems, starting with subsidence of the soil. A decrease in the soil horizon of the North China Plain on 20 cm recorded in the territory in 60 thousand square meters. km The city of Cangzhou naturally collapsed: in forty years, the height above sea level fell by 2,5 meters. Lakes and rivers began to shallow in the region. Well, and Beijing: the city goes underground at a rate of up to 137 mm per year.

Now, from the Yangtze and Yellow River rivers, 4350 billion cubic meters of water will be pumped to the Chinese north every year along 44,5 km-long canals. But alas, even this large-scale project will not save the country. In China, the 1 / 5 population of the planet lives, but the whole of China’s fresh water reserves are 7% of the world total.

In the forecasts flashed 2030 year. By that time, the PRC will need 818 billion cubic meters of water annually. But the level of water supply will remain at the level of 619 billion, writes columnist "RG". China faces severe water savings ...

In 2012, Director of the Institute for Water Problems of the Russian Academy of Sciences V. Danilov-Danilyan at the presentation of the United Nations 4 Report on Water Resources Development explainedthat there are ten to fifteen years left for the extensive growth of water consumption on the planet.

The scientist recalled that up to 70 percent of the water used is water for agricultural irrigation. It is clear from the materials of the report that in 10-15 years, people will be convinced that an extensive increase in water use is impossible. The scientist proposed to increase the efficiency of water use, develop its purification and reuse it.

The report also noted that three countries are in an advantageous position: Russia, Brazil and Canada. There is no water shortage here. And in Russia, water that is not used in agriculture will remain even seventy years later. However, Danilov-Danilyan specified that a significant part of Russian water resources is concentrated in the Asian part, while agriculture, industry and the population are concentrated in European territory. And with the extensive scenario of the European part of the Russian Federation, there is not enough water in the same 2030 year.

Tseerushnye experts believe that the mark of total water deficit of the planet is not 2030, but 2040. The upcoming drinking water shortages they explain rapid population growth in water-deficient regions, which at the same time are economically backward and politically unstable. In the twentieth century, the population of the planet more than tripled. But everything would be fine, but here the consumption of fresh water on the planet during the same time increased not by three, but by 6. By themselves, these "times" already seem threatening.

Experts from the Organization for Economic Cooperation and Development "return" humanity to the mark 2030 of the year. According to them, by this date already 47% of people will live in areas with water scarcity.

In Yemen, the north can go against the south. Egypt faces conflict with Ethiopia. India and Bangladesh are about to quarrel with China. India may also have a water conflict with Pakistan. Burkina Faso may well be a strategic opponent of Ghana.

Larger confrontations can happen: for example, between Thailand, Laos, Vietnam, Cambodia and China. By 2015, a large dam can be erected on the Mekong River and its tributaries, and by the 41 year, already 2030.

If you turn your eyes to the Middle East, it becomes clear that the subject of a heated dispute between Syria, Iraq, Iran and Turkey can be the Tigris and the Euphrates. Today, Turkey is already “cursed,” since 98% of the sources of the Euphrates begins in this country.

Israel can quarrel with Palestine.

Analyst Clark Judge from “US News” counted on the world map not nine, but as many as twenty regions where “water wars” could flare up (ending with some US states).

However, looking for such places on the globe is a thankless task. It is enough to understand that by the year 2030, water deficiency threatens almost the whole world, including the European part of Russia.

According to the estimates of UN experts, who didn’t look into the future, but into the past, over the last fifty years, 1500 water conflicts have occurred in the world.

“The water question,” writes Alexei Kupriyanov ("Lenta.ru"), - regularly discussed in the framework of the UN. In the Millennium Declaration, adopted by the United Nations in 2000, the international community committed itself to reducing the number of people deprived of access to clean drinking water by the 2015 year by half and ending the irrational use of water resources. There is a year left before implementation, and the Declaration in this direction, it seems, has remained just paper.

The question of water distribution is best illustrated by the fact that world politics is actually a zero-sum game: if someone wins, then someone inevitably loses. It is impossible to make enough water for everyone. Water wars were predicted back in the 1980s, but they never happened. But this does not mean that, sooner or later, the life-giving moisture of mankind will not, after all, begin to share with weapons in hand".

We end with a excerpt from Robert Sheckley’s Special Prospector (1959):

Morrison waited, peering into the glittering mouth of a whirlwind that swept across the sky and stopped a quarter of a mile away. From the whirlwind it seemed a large round copper bottom. The mouth of the vortex began to expand, missing an even larger copper bulge. The bottom was already on the sand, and the bulge was growing. When at last it appeared all, in the vast desert rose a gigantic ornate copper punch bowl. A whirlwind rose and hung over her.

Morrison was waiting. Sore throat sore. A thin stream of water appeared from the whirlwind and poured into the bowl. Morrison is still not moving.

And then it began. The trickle turned into a stream, the roar of which dispersed all kites and wolves. A whole waterfall fell from a whirlwind into a giant bowl.

Morrison stumbled over to her. "Ask me a flask," he said to himself, tormented by a terrible thirst, hobbling along the sand to the cup. Finally, “Special Prospector” stood before him - above the bell tower, more than a house filled with water, which was more expensive than the most gold-bearing rock. He turned the tap at the bottom of the bowl. The water moistened the yellow sand and ran down the dune in streamlets.

I should have ordered another cup or glass, Morrison thought, lying on his back and catching a stream of water with his mouth open.