1 September 2014
50
The militiamen are ready to provide humanitarian corridors to the Kiev security forces who are surrounded, but on condition of disarmament. The Ukrainian authorities did not accept the proposal and force their fighters to break through with the fight. Reports about it RIA News With reference to the Minister of Defense of the DPR, Vladimir Kononov. 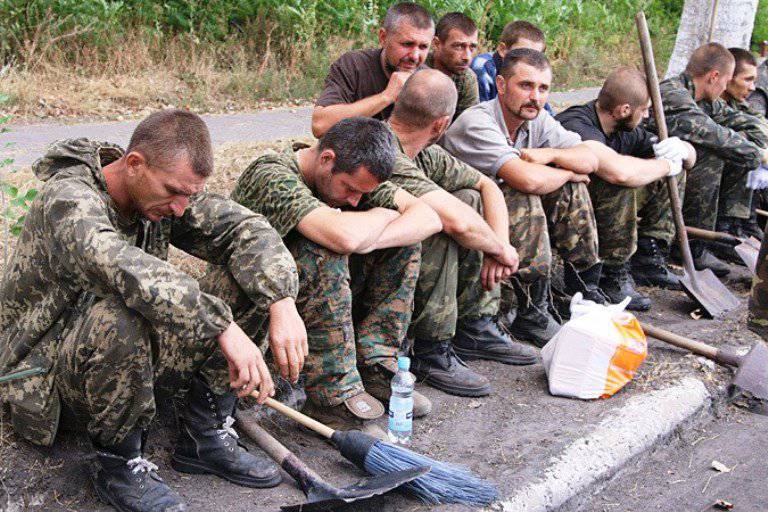 Commenting on this situation, Konstantin Dolgov, the Russian Foreign Ministry’s official for human rights, tweeted: “Kiev’s unwillingness to use Gum-corridors for the withdrawal of security officials is an indicator of the real “readiness” of the authorities to save the lives of their people. ”

30 in August in response to the appeal of Vladimir Putin, the leadership of the DPR announced that it would provide an opportunity for the military to leave the encirclement, but with one condition: all heavy weapons should be surrendered. At the same time, the Minister of Defense Kononov stressed that weapon and armored vehicles must surrender in good condition, otherwise the security forces will be destroyed. This ultimatum was given to three battalions ("Kiev", "Shakhtersk", "Kherson") and brigades of the Armed Forces - 25, 23, 30, 40 and 93.

However, according to Kononov, the security forces are trying to break the conditions. “There were precedents when the Donbass battalion hung white flags, we sent buses to them for transportation, and they opened fire. We responded, opened fire, and then defeated this battalion "- quotes the words of the Minister "Russia-24". As a result, about a hundred people were captured.

Most of the survivors believe that the command of their betrayed. “Yes, we were abandoned just surrounded. Then we tried to get out of it, fought, we were fired. In all, we were 300 – 350 people. There are a little more than a hundred. ”- said the prisoner named Constantine.

Regarding those military personnel who accepted the ultimatum and disarmed, the militia abide by all preliminary agreements. “On August 30, I was ordered to release more than 200 people in the Starobeshevo area. After tank the convoy and infantry fighting vehicles moved to self-defense forces, we destroyed one tank and one infantry fighting vehicle, the convoy lifted the barrels up, disarmed, we released them ”- told Kononov.

According to the platoon commander of the Donetsk militia with the call sign "Pastor", the militants of the Right Sector are trying to prevent the army units from leaving the encirclement unarmed.

"We advanced to Starobeshevo with the task of taking up defense in the place from where the 93 Brigade from Dnepropetrovsk could have escaped from the boiler, previously taken into the ring- Pastor says. - But it turned out that part of the territory was under a double environment, and two infantry fighting vehicles that came to us to surrender were under fire from the Ukrainian side. ”.

He also said that one of the officers who came under fire later admitted that the Right Sector had opened fire on them. In his opinion, it was an ambush, the purpose of which was to prevent disarmament and voluntary surrender.

Meanwhile, the adviser to the head of the Ministry of Internal Affairs, Anton Gerashchenko, is enjoying something in Kiev. He tweets: "Good news from Semen Semenchenko! Just from the entourage near Ilovaisk left another 69 fighters of the Donbass battalion. ... Also 11 of the soldiers of the special battalion of the MIA "Svityaz" and 4 of the militant of the special battalion of the Ministry of Internal Affairs of Dnipro-1 left the encirclement. Lists of those who have not yet come out will be summarized and published tomorrow. ”.

Channel "LifeNews" reminds that the commander of the battalion "Donbass" Semyon Semenchenko repeatedly made accusations of the country's leadership that it does not help the military in the south-east of Ukraine. “He also blames officials for the failures of his battalion. At the same time, Semenchenko himself, due to his injuries, does not take part in the combat operations of his battalion. ”, - indicated on the channel's website.
Ctrl Enter
Noticed oshЫbku Highlight text and press. Ctrl + Enter
Military Reviewin Yandex News
Military Reviewin Yandex Zen
50 comments
Ad