Violations of the INF Treaty: Facts and Opinions

1 September 2014
31
One of the main international themes of recent times are the accusations of Russia in violation of the terms of the agreement on the elimination of medium-range and short-range missiles. Recall, not so long ago, the US State Department published a report on compliance with the conditions of various international agreements. The document claimed that Russia was violating the INF Treaty, but no evidence was given in favor of this statement. The report was followed by a series of statements and proposals. In the near future, the current situation and, apparently, baseless accusations should be the subject of negotiations between representatives of Moscow and Washington. 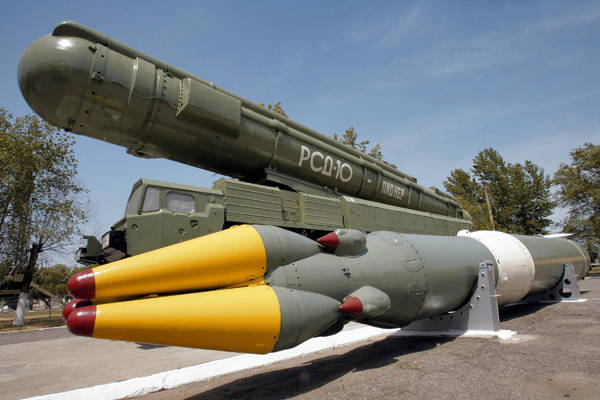 The appearance of the report and the statements of American leaders by the Russian Foreign Ministry responded in a rather tough but restrained manner. The Foreign Ministry of Russia, in its official commentary from 1 of August, stated that the United States once again made an awkward attempt to act as a mentor, giving marks to others and “claiming to possess the ultimate truth”. In confirmation of this, Russian diplomats recalled that the US claims are not supported by any evidence and are based on strange speculations and conclusions. Thus, claims are not expressed with the expectation of experts and analysts, but to create the necessary information background.

In Washington, we got acquainted with the official Russian response to the accusations and took them into account. A few days ago, US State Department spokeswoman Marie Harf announced that a proposal for new negotiations had been sent to Moscow. The subject of consultation should be the existing treaty on the liquidation of the INF and the fulfillment of its conditions. According to reports, the negotiations will be held in September. Any information about the composition of the delegation, which will defend Russian interests, has not yet been published. The Russian Foreign Ministry proposes first to bring experts to the discussion of the problem and only then transfer them to the leadership level of the two countries.

28 August Interfax news agency published an interview with Russia's Permanent Representative to NATO Alexander Grushko. Among other things, the Permanent Representative commented on the situation with accusations of breach of the INF Treaty. He drew attention to the time of the appearance of these charges. A regular NATO summit will take place in Wales in early September, during which the leaders of the organization will discuss various aspects of the strategy, including relations with Russia. Accusations of breach of contract were published precisely in connection with the upcoming summit.

A. Grushko believes that an informational “stuffing” about alleged violations will be useful to those forces that are trying to make Russia an opponent of the United States and NATO. Also, the Permanent Representative recalled that the existing treaty provides mechanisms for dialogue and the settlement of all issues that arise. As for attempts to bring other NATO countries to the discussion of the problems of the Treaty on the Elimination of the INF, they were called artificial by A. Grushko.

Russia's Permanent Representative to NATO did not forget to mention Russian claims to the United States in the context of the INF Treaty. He recalled the existence of target missiles used in testing missile defense systems, plans to deploy MK-41 missile systems, etc. in Eastern Europe. systems whose characteristics allow them to be classified as medium or short range missiles. Thus, Russia can respond to American accusations with similar claims, which are also supported by evidence.

A. Grushko's assumption about the reasons for the appearance of dubious theses in a State Department report has the right to life, since it fits perfectly into the logic of the current international situation. However, there are other versions that can explain the new appearance of the INF treaty in the news feeds. The Russian leadership in recent years has repeatedly pointed out the negative features of the agreement, and did not rule out the possibility of overcoming it.

The last statement of this nature was made in mid-August, after the appearance of the controversial report. During his speech in the Crimea, Russian President Vladimir Putin again raised the topic of medium and short-range missiles. Just a few days after that, US State Department spokesman M. Harf spoke about the proposal to hold talks. It is quite possible that another reminder about Russia's possible withdrawal from the treaty had an effect on American diplomats, as a result of which they decided to initiate new negotiations.

The results of future negotiations are difficult to predict. Moreover, there is reason to believe that they will not lead to any result at all. The controversial report of the State Department did not indicate evidence of a breach of the terms of the INF Treaty, which is the reason for the corresponding unpleasant questions to US officials. If the evidence is not presented in the published document, and also does not exist at all, the situation that has developed in recent weeks may take a very strange form.

It can also be assumed that future negotiations will not lead to the withdrawal of countries from the treaty. Over the past 25, over the past few years, the Treaty on the Elimination of INF on INFORMATION is one of the pillars of security in Europe, which means that its termination may be associated with serious risks not only for the participating countries (USA and Russia), but also for a number of European countries .

It should be recalled that several years ago, Russia submitted a proposal to the UN to finalize the INF Treaty. This proposal concerned amending the terms of the treaty in view of the current development of rocket technology. At the time of the signing of the agreement, only a few countries had medium and short-range missiles: the USSR, the USA, France and China. Currently, the list of countries with such systems in service has increased significantly. In this regard, Russia offered to open an agreement on the liquidation of the INF Treaty for the signing of everyone. Such a change in the agreement remains at the proposal stage.

A NATO summit will be held in Wales in early September, during which the main issues of the organization’s strategy will be addressed. Among other things, this event is likely to raise the issue of further relations with Russia. If the assumptions of Russia's permanent representative to NATO, A. Grushko, are justified, then the report of the US State Department could be a reason for the further deterioration of international relations. The Russian-American negotiations on the INF Treaty will take place later, and it is likely that the position of the United States will be adjusted to reflect the decisions of the NATO summit. It is unlikely that these negotiations will be easy and quickly lead to a positive result.

As we see, one of the existing international treaties has again become a topical issue. Moreover, it is used as an instrument of political pressure and, perhaps in the very near future, will be another reason for a new deterioration in relations with Russia. This means that Russian diplomats will soon again have to negotiate and defend the country's position.

Ctrl Enter
Noticed oshЫbku Highlight text and press. Ctrl + Enter
We are
RSD-10 “Pioneer” missile system"Pioneers" can and should come "Topolki"
31 comment
Information
Dear reader, to leave comments on the publication, you must to register.