They want like NATO. Announced a new stage of reform of the Armed Forces of Ukraine 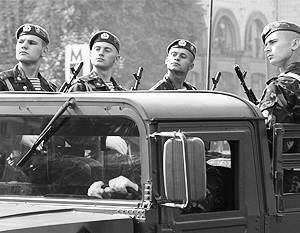 In Ukraine, it is planned to form a separate branch of troops - Special Operations Forces. This was announced by the Chief of the General Staff of the country Grigory Pedchenko. “Sometimes it is necessary to get drunk too,” one of the former defense ministers of the country responded to this statement, telling when this decision was actually made.


As the Chief of the General Staff of Ukraine explained on Wednesday, within the framework of the army reform, Special Operations Forces are created to participate in antiterrorist and even informational and psychological operations, to ensure the safety of national maritime shipping, and to protect the lives and health of citizens and property outside Ukraine.

According to the previously announced reform plan, until 2017, all units will be divided into Constant Readiness Forces, Combat Duty Forces and Capacity Forces. As the generals promise, the army will receive an appropriate level of staffing, armament, military equipment and material and technical means, UNIAN reports. It is assumed that the reform will significantly bring the Ukrainian army closer to NATO standards.

The statement by the Chief of the General Staff took the military analysts by surprise. It is not yet clear whether the new forces will be created inside one of the three new types of troops or separately.

According to Pedchenko, in addition to the aforementioned special operations forces with a view to deterring, localizing and eliminating armed conflicts, which can occur in a short time and have a transient character, it is also planned to create a rapid response Corps. It is also supposed to qualitatively change the state of weapons and military equipment of the Armed Forces of Ukraine and, at the end of 2017, have up to 30% new or upgraded models.

Moreover, the priority in the configuration of new models of equipment will be given to military units aviation, air defense, Special Operations Forces, airborne personnel, reconnaissance and electronic warfare.

“The time for a major reorganization of changes in the Ukrainian army has come! By 2017, we intend to create small in size, mobile, well-trained, and most importantly, equipped with new and modernized models of equipment of the Armed Forces. We are fully prepared to fulfill this task, ”said Colonel-General Grigory Pedchenko following a meeting with NATO members.

“Orange” are jealous of the West

After reading these statements, the former "orange" Defense Minister Anatoly Gritsenko could not restrain his indignation. He even offered his former subordinate "sober."

“I heard from the military that the Chief of the General Staff, General Pedchenko, is not indifferent to alcohol, sometimes he cannot be found for five to seven days, even to report to the authorities — he turns off the mobile phone and goes to the astral ... But sometimes it’s necessary to get drunk too, at least before international meetings high level. Otherwise there are incidents funny and sad at the same time, ”Gritsenko wrote in his blog.

“The decision to create the Special Operations Forces was made three and a half years ago - 17 December 2007 of the year,” explains Gritsenko. - On this day, the last in the post of Minister of Defense, I signed a program to create the Special Operations Forces. That is, it is not a constituent order on the need to create a new kind of troops, but a detailed and balanced (by objectives, measures, resources and end results) document that indicates the responsible and deadlines. ”

“Today, the Special Operations Forces were to act as the most effective and most efficient structure within the Armed Forces. Pedchenko, on the other hand, speaks about some planned reforms at the turn of 2017, already outside the term of Yanukovych's cadence ... No reforms of Yanukovych have been planned yet - he has not approved any such document. No one! For a year and a half! Sheer blah blah blah, ”the ex-minister added.

From 1991 to the present day, the prospect of rapprochement with NATO and even joining the alliance remained a serious lever of Kiev’s pressure on Russia. And this happened with all the presidents, including those who were reputed to be “pro-Russian,” such as, for example, Leonid Kuchma.

Recall that last year the Verkhovna Rada consolidated the non-aligned status of the state and struck out all references to the goal of Ukraine to join NATO. In February, Anders Fogh Rasmussen, Secretary General of the Alliance, visited Kiev, and since the beginning of June, the cooperation of the Ukrainian military with NATO has sharply intensified. Thus, near Poltava, the Ukrainian-US-Polish safe sky-2011 exercise had just begun, and in June Kiev allowed the US military ship to approach the Crimea and take part in the regular exercises "Sea Breeze - 2011", although, being the leader of the opposition, Yanukovych traditionally strongly opposed such visits.

This intensification of cooperation coincided with the failure of Kiev’s attempts to persuade Moscow to reduce prices under the gas contract.

However, some analysts urge not to attach too much importance to these gestures. “President of Ukraine Viktor Yanukovych has not set a course for rapprochement with NATO and is not going to take it!”, Valentin Badrak, director of the Center for Army Research, Conversion and Disarmament assured the newspaper VIEW. According to the analyst, “the current level of cooperation between Ukraine and the alliance has dropped by an order of magnitude, at the strategic level it is formalized, it is practically not there”.

The surge of activity at the tactical level: visits, exercises, etc. - the expert calls only “the tip of the iceberg” and “creating the appearance of active interaction, which benefits both Kiev and Brussels”.

“It is beneficial for Ukraine to have good relations with all its neighbors. For NATO, it is advantageous to show that the alliance has not turned away from Kiev. Although in reality this is not true. The decision on Ukraine was made in Brussels in 2007, and it was anti-Ukrainian, ”said Badrak.

We are in Yandex Zen
If not for the generals ... Shameful history of the Ukrainian army
Military reform as an integral part of the security concept of the Russian Federation: Systematic dynamic assessment
7 comments
Information
Dear reader, to leave comments on the publication, you must to register.