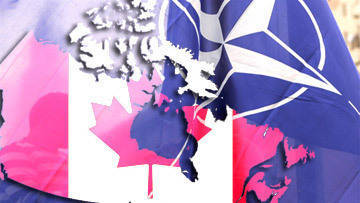 1 July we celebrated the birth of Canada as an independent state. I was lucky that day, and I ended up at a festival in the town of Blyth, where the Canadian performance “Vimy” premiered, narrating about the very war that gave Canada a sense of statehood. In this outstanding play, four wounded soldiers and a nurse are told - all Canadians - trapped in a military hospital after seizing the crest of Vimy. The authors of the play do not openly ask why World War I was fought, but история her characters make you ask why all this suffering took place.


In any lesson in Canadian history, you will be told that Canadians fought in World War I because we were loyal members of the British Empire, and that the culmination of the war was the recognition of Canada as an independent state. But if you were in the US, you will be told in history class that the First World War, as President Woodrow Wilson declared, was conducted in order to make the world safe for democracy.

But which democracy? The atrocities and atrocities of the First World War simply paved the way for the death of one hundred million people from communism, to the rise of Hitler’s power and to the horrors of the Holocaust. In that war, 10 and more than one million servicemen died, and 21 one million were injured. And these figures do not include those soldiers who returned home safe and sound, but like Lieutenant Laurie MacLean from the play “Vimy” brought with them “all that jumble that sits in me now, stuck there forever.”

Watching the tragedy unfolding in the play, I recalled the recent speech by US Secretary of Defense Robert Gates, in which he stated that if Europe did not play a more active role, NATO alliance could fall apart. It would be a great success for us.

NATO, like the system of alliances that drew us into World War I, is a dangerous anachronism that draws Canada into conflicts that we could avoid.

In World War I, Serbia was linked to Russia, which, in turn, had alliances with France and Britain, which had allied relations with Japan. And Austria was in an alliance with Italy and Germany, which supported the alliance with the Ottomans. If it were not for this web of alliances that connected Europe, it is quite possible that instead of the First World War there would have been only a series of clashes on the border of Austria and Serbia.

NATO was created after the Second World War to ensure the security of Western Europe from Soviet expansion. The USSR knew that aggression on the continent would lead to an all-out war with America. This year marks 20 years since the collapse of the Soviet Union and the elimination of the Soviet threat. Since then, NATO has been convulsed, trying to find an excuse for its existence.

From Bosnia and Kosovo, we have to ask ourselves whether it would be better for Canada outside of this organization.

Does it not seem obvious that interventions like Libyan will have more reason if they are carried out as UN missions, and not NATO? Of course, wars in the name of adhering to the laws of the world community should be sanctioned by the main governing body of this community, and not the transatlantic defensive pact.

There is a more important question. Does NATO provide Canada’s security by preventing our citizens from participating in unnecessary wars, as was the case with Vimy? No, it does not. On the contrary, NATO itself has brought us to the edge of an unnecessary war in the most recent past.

In the 2008 year of the former Soviet republic of Georgia, it was said that it would receive direct access to NATO membership. Soon after, Russia carried out military intervention in the Georgian republics of Abkhazia and South Ossetia, in order to stop, as it turned out, the persecution of the local national communities by the forces of the Georgian state. Become Georgia a member of NATO before the outbreak of this conflict, and Canada would be in a state of war with Russia, fighting with a power that intervened in a humanitarian crisis.

A little later, Israel attacked a Turkish vessel with help heading to Gaza. If NATO member Turkey declared that it considers these actions to be an act of war, then, in accordance with the terms of the NATO collective defense agreement, Canada and the rest of the North Atlantic alliance would have to fight with Israel. To declare that we would not allow such a thing means to demonstrate that NATO is an overt farce. After all, its members have much closer allies among countries with which they have not entered into official alliances than among many NATO members.

If Canada were outside NATO, like Australia or New Zealand, it could remain neutral in those conflicts that do not directly concern it and in which it is not interested. Thus, our country and our military would not be drawn into conflicts only because of diplomatic formalities. However, Canada in the case of the arrival of the new Hitler would have retained the opportunity to participate in the war, in which it is vitally necessary to fight. In such a situation, the first duty of the state would be to protect Canadians, and not foreign regimes.

We are in Yandex Zen
About Stalin and Khrushchev
What you didn't want to know about England
6 comments
Information
Dear reader, to leave comments on the publication, you must to register.