August 29 2014
77
While civil society is deciding whether to allow the use of unmanned vehicles, the military have already made their choice. Israel has created and used UAVs to patrol the border. The Israeli land drone was first demonstrated back in 2009, at an exhibition in the UK capital. At an exhibition in London, the company G-NIUS, which is owned by the large Israeli military companies Elbit Maarakhot (Elbit Systems) and Taariya Avirit (Israel Aerospace Industries), presented its advanced development - the unmanned ground vehicle UGV unmanned vehicle (unmanned ground vehicle).

This car was commissioned by the Israeli army in 2009 year. Since then, he is the first and only mass-produced car of this type, which is in annual operation in combat conditions. The Guardium land drone was built on the base of a buggy chassis, but not of a civilian version, but of a military vehicle. Such buggies specifically for the special operations units are produced by the American company TOMCAR. Famous buggies from this company have been used by the IDF to patrol Israeli borders for more than 30 years. The chassis for Tomcar are currently manufactured in Australia.

UAV has received an automated tactical positioning system, and can also be operated autonomously in off-road conditions. The car is able to accelerate to 80 km / h, while the drone can also carry a payload weighing up to 300 kg, including easy booking, which covers vital machine systems. In this case, the combat weight of the device is 1400 kg. 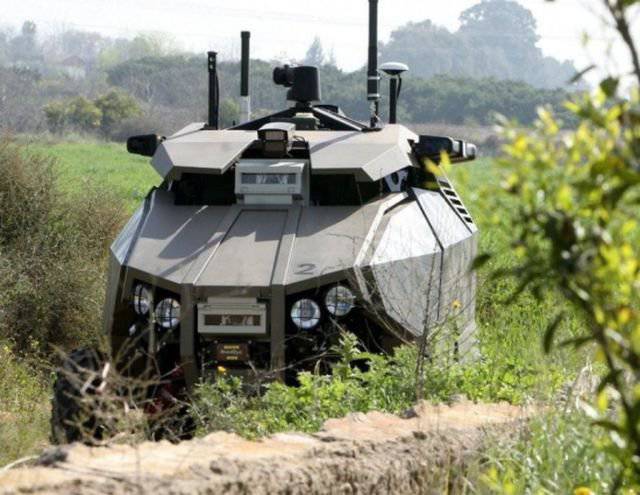 This unmanned vehicle can even be equipped with combat or non-lethal weapons, which can be operated by a machine operator from a special command center. Usually, an 40-mm automatic grenade launcher and a large-caliber 12,7-mm machine gun are mounted on the vehicle. If necessary, an unmanned buggy can be fitted with an armored shield, a device for throwing grenades with tear gas, as well as a six-barreled machine gun and other types of weapons.

However, the main thing weapon futuristic drone is a set of special sensors, which include a thermal imager with automatic targeting and capture, a video camera, a microphone, as well as strong loudspeakers to provide two-way radio. In this case, the unmanned vehicle can operate separately or move with the infantry. In the second case, it is controlled by a special portable terminal; one of the soldiers of the combat unit controls the vehicle. In the first case, the control resembles the control of the UAV as much as possible and is carried out from a special control center.

UGV is equipped with a four-stroke diesel engine Lombardini, which is paired with a continuously variable variator. In addition, Guardium has an anti-squat effect. The peculiarity of this effect lies in the fact that during acceleration the longitudinal lever is displaced, which raises the body, as a result of which, during acceleration, the car does not goat, which means it behaves better on rough terrain and is more manageable. The car is very well adapted for off-road driving. It has an 38-centimeter ground clearance, minimal overhangs and an 34-centimeter suspension travel. At the same time, with the total length of the 295 car cm. The length of the wheelbase is 202 cm. All this makes the Guardium an excellent SUV that feels great in the Middle Eastern deserts. 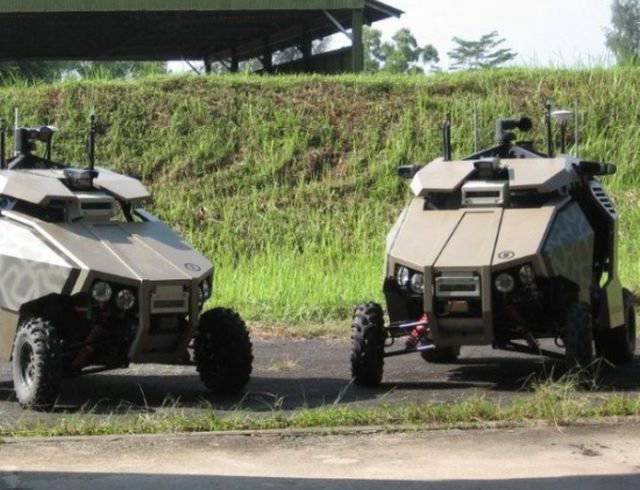 A feature of the Guardium car is that it can independently carry out patrols on a given route, including in very rough terrain, without the participation of the operator. The machine operates in autopilot mode. The second interesting feature of this robot is its “self-learning” and the ability to independently choose a tactically important patrol zone, taking into account a sudden change in disposition.

Persons who are allowed to drive a Guardium vehicle are subject to the following requirements:
- the presence of the right to drive a vehicle and driving experience with both automatic and manual gearboxes;
- good knowledge of car mechanics;
- good vision;
- the ability to work in a very intense mode and be actually “glued” to the screen, on which the unmanned vehicle displays a picture of the observation.

Working with UGV Guardium is preceded by passing special training courses lasting 4 a month. From the control center, the car can be controlled using joysticks, which are responsible for turning the steering wheel and pressing the pedals. It is noteworthy that most of the military personnel who have undergone professional selection are women. 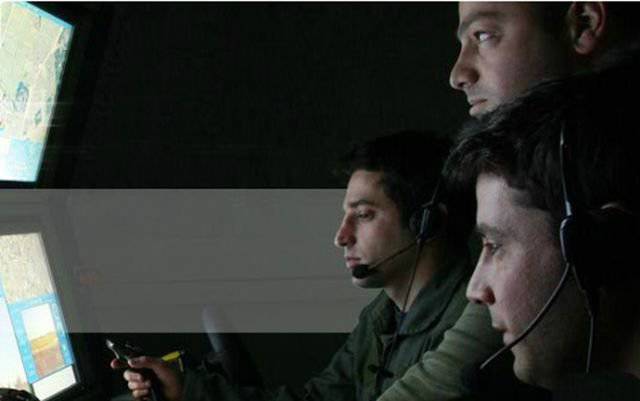 According to the press service of the IDF, the Guardium is effective:
- to detect suspicious persons in the Gaza Strip who are approaching the separation barrier with Israel;
- to detect traces of illegal crossing of the Israeli border;
- to find the entrances to the underground tunnels that connect the Gaza Strip and the Sinai Peninsula and are used by smugglers and terrorists;
- to detect suspicious subjects who dig holes in the immediate vicinity of the "security fence";
- for recognition of explosive devices, for their detection the car is equipped with a wide range of special equipment and surveillance cameras.

After 5 August 2012 was damaged, the vehicle’s “security fence” carried out 80-hour continuous patrols of Israel’s border with Egypt and the Gaza Strip. The patrols were carried out until the barrier was fully restored. Currently, the Guardium vehicle continues to patrol the borders of the Jewish state; the exact number of vehicles used by the Israeli army is unknown.

This land drone can patrol independently, but it is most effective as a means of supporting foot patrols. “We are counting on our infantry when things get particularly“ hot ”, but the infantrymen also rely on us. This is a symbiosis, - emphasize in the unit of IDFM UAVs. Currently, Guardium is most useful on the borders with Lebanon and the Gaza Strip, in those places where the penetration of smugglers, terrorists and spies into the territory of Israel seems to be the most realistic. 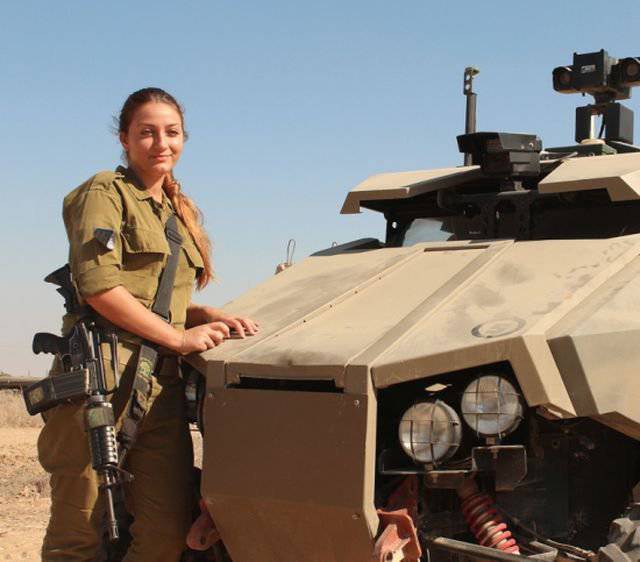 It is worth noting that Israel is expanding the use of unmanned aerial vehicles in its ground forces. So in the framework of the operation "Unbreakable rock" the army of Israel for the first time used its armored personnel carrier M113, equipped with a remote control system. Tests of the first unmanned armored personnel carrier were held in the area of ​​Khirbet Ahza, in which soldiers from the Givati ​​Brigade operated. Tracked armored personnel carrier M113 without a driver and crew can carry up to 4 tons of cargo, reaching speeds up to 50 km / h. The machine was used to transport weapons, food and ammunition. To control the unmanned M113 used command car, which was located on the border of the Gaza Strip. In this car were specially trained servicemen of a company of unmanned vehicles.

The Israel Defense Forces use land-based unmanned vehicles since the 2009 year, but they have not previously been used to transport goods. Guardium unmanned vehicles patrolling the border have received the nickname “the right partner” in the IDF. Thanks to modern video surveillance systems, this machine is able to work in any climatic conditions, day and night. According to the commander of the robotic patrol unit, these cars can save a lot of money, and also save the lives of the Israeli military. 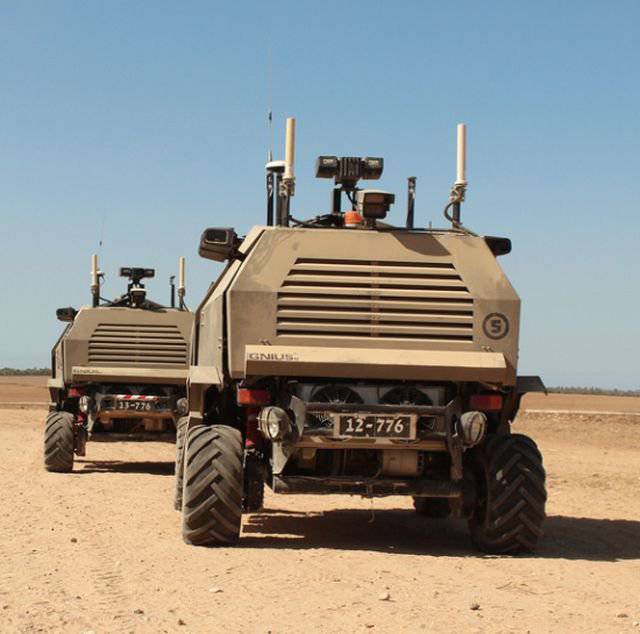 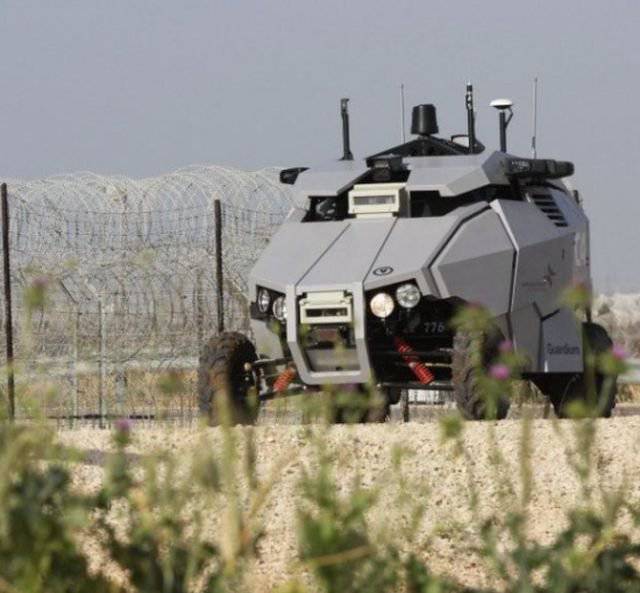 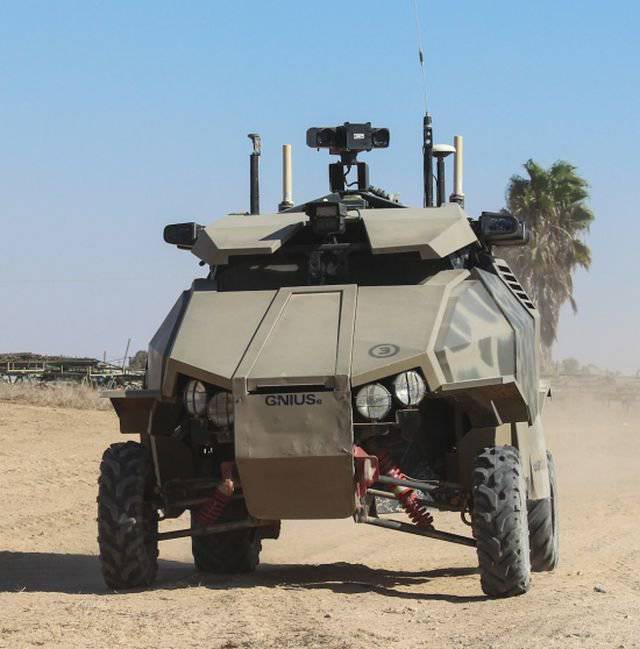 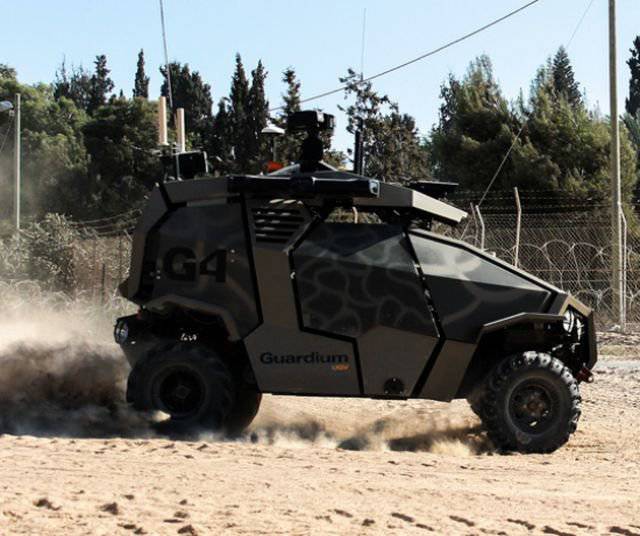