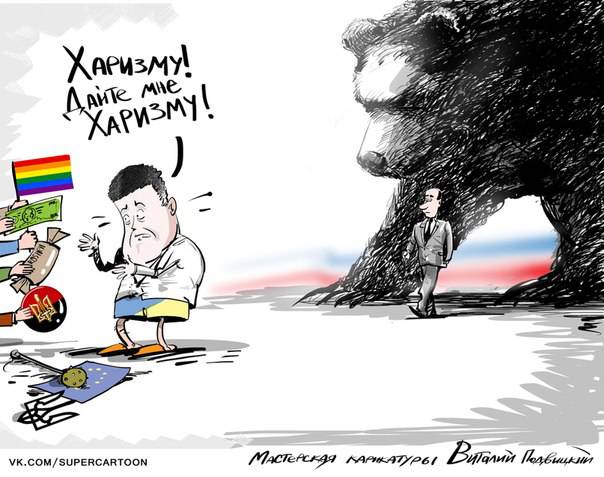 The counter-offensive of the Novorossia and the new boilers of the Ukrainian army was explained by the Kiev junta by the “invasion of the Russian troops”, from the blogger Tymchuk to Tymoshenko and Poroshenko. Just to avoid the shameful truth: the militia brilliantly defeated the southern Ukrainian grouping of troops, and drove it into the boilers.

Although the OSCE mission on the Russian border does not confirm the introduction of troops, no one cares either for Kiev or in Washington: they have long made a lie the basis of their policy: from the shooting on Maidan, the Odessa Khatyn and the blood of Mariupol. And they ended up with a complete loss of vision: they do not see an artillery bombardment of the cities of the Southeast. And everywhere children's excuses: we are not guilty, they themselves are guilty, they burned themselves and shot!

However, soon Kiev itself will become a victim of the policy of lies: Europe and Washington will throw it, they will not help anything significant, except perhaps with any sanctions against Russia.

Merkel in front of Minsk clearly expressed herself in favor of “not harming Russia”, because “we are dependent on each other”. Washington has given its Russian policy at the mercy of psaki.

The first signs of this already appear: “The Ministry of Foreign Affairs, the representation of Ukraine in the EU, and the administration of the Ukrainian president are shocked by the fact that the European Union does not recognize the“ invasion of Russian troops ”into Ukraine.” Meanwhile, a new and important factor appeared in the Ukrainian-Bandera confusion: the initiative on the fronts of Novorossia shifted from the APU to the BCH. The offensive of New Russia in the south has reached the operational scope, and threatens to spill out to the Crimea and the Dnieper.

The sluggish negotiations that began in Minsk by Kiev political analysts who are close to the junta, consider playing into the hands of Moscow. Probably, this is the case; Moscow, through these negotiations, binds several hands to both the West and Kiev, as if “talking” the war. They became the backdrop of the defeat of the junta's southern front, it is their only result, as it were, for today. Interestingly, they began simultaneously with the onset of the BCH: did it coincide in this way, or was it intended?

As a result, in the newly formed boilers, new ukrovoysk boiled, and this led to the fact that the main Kiev Maidan boiler begins to boil. Tymoshenko woke up and demanded an urgent imposition of martial law in the country, there are demands to break off diplomatic relations with Russia. The Minsk summit, of course, brought additional confusion to svidomye minds.

Obviously, we are witnessing the beginning of the collapse of Bandera Ukraine. Poroshenko prudently dismissed the Rada, and now for the period of parliamentary anarchy becomes a dictator. But will he pull on this role, will he be able to hold the lid on the Kiev cauldron? The demands of his resignation have already sounded in this cauldron.

All stability in Ukraine, or rather, its remnants, are now held on the gas transit pipe. Poroshenko, apparently, gave a guarantee to Merkel, which would ensure the transit of gas to Europe, so Washington, on the contrary, is advantageous to blow up this pipe. It’s time to bet on this score ... By the way, Yatsenyuk has already accused Moscow of plans to stop gas supplies to Europe.

What will happen now with the negotiations in Minsk? - it is clear that they are hanging by a thread. But whatever they decide in Washington, Berlin and Kiev, in precisely this sequence, Russia will not come to the Ukrainian war, but will simply provide humanitarian assistance to the New Russia. Sergei Lavrov again repeated the position of Russia: "From the civil war in Ukraine to the national dialogue."

And Putin did not even discuss the issue of a cease-fire with Poroshenko, since it is meaningless, he will be decided on the battlefields of the New Russia. When and where the offensive of the BCH will stop, when the front stabilizes, then it will be possible to discuss the terms of the truce of the parties.

... Moscow, apparently, will focus on conveying the genocide of civilians in the Donbas to the world public by the Bandera troops, will demonstrate the hypocrisy and deceit of Washington, which ignores the humanitarian catastrophe in the South-East of Ukraine. And so it is preparing a second humanitarian convoy. And he is waiting for his third strategic ally to enter the forefront, after the army and fleetMother Winter!