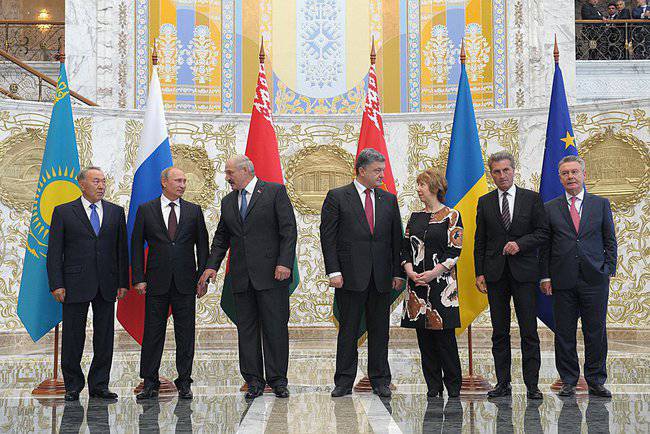 Vladimir Putin there is no reason to compromise with Poroshenko

Negotiations took place in Minsk yesterday between Vladimir Putin, Petro Poroshenko, representatives of the European Union and the leaders of the countries of the Customs Union (Kazakhstan and Belarus).

The highlight of the summit was the meeting of the presidents of Russia and Ukraine, which lasted more than two hours.

Member of the State Duma Committee on Defense Vyacheslav Tetekin specifically for KM.RU commented on the results of the negotiations.

It is clear that the winning party is New Russia

- In the course of various negotiations and attempts at political settlement, the most important factor of the events taking place is ignored. This factor is the will of the insurgent people of New Russia. I have already said that diplomats and politicians, as a rule, draw up the results that are already on the battlefield. In the meantime, these results did not show up, diplomats can beat around the bush as long as they wish, but the conversation will be about nothing. So, the situation in Novorossia has reached such a stage that it will not be possible to simply say “stopped and let's settle the issue”.

It is clear that the winning party is New Russia. Previously, they agreed to federalization, but now they say that after all that has happened, with the current balance of power, they demand complete independence. In other words, the situation is largely determined not only and not so much by Moscow or Washington. Accordingly, Vladimir Putin has no reason to compromise.

This is on the one hand, but on the other hand, Poroshenko also cannot agree to an agreement, because it depends on its far-right nationalists. As soon as he tries to talk about some kind of compromise settlement, he will immediately be swept away. In short, the ground for diplomatic negotiations has not yet matured.

Poroshenko is a toy in the hands of more powerful political forces, including international

Does the summit legitimize Poroshenko's status? I must say that Poroshenko’s legitimacy is flawed, because the population of Donetsk and Luhansk people's republics did not participate in the elections. Let me remind you that almost 7 million people live there. But still we cannot call Poroshenko an impostor at all. He has a certain mandate to conduct negotiations from Ukraine.

However, there is formal legitimacy, but there is a real ability to govern the state. In this sense there are serious doubts regarding Poroshenko. The most industrialized territory frankly does not obey him, and is in a state of rebellion. A number of oligarchs headed by Kolomoisky also almost openly refuse to obey him.

Western Ukraine behaves as she wants. The right-wing forces say that if Poroshenko will not do what they indicate to him, then he will be overthrown. That is, Poroshenko is in many ways a toy in the hands of more powerful political forces, including international ones.

If Novorossia wins, the uprising will almost inevitably spread to other Russian-speaking areas. It would be absurd to accuse Russia of allegedly engaging in incitement. For New Russia, it would be natural to remove the threat from Kolomoisky, who usurped power in the Dnipropetrovsk region. And besides, I think, in this area and in Kharkiv an internal insurgent movement will begin. The composition of the population there is about the same as in Donetsk and Lugansk, and people there experience the same feelings.