"Bastion" for the Crimea

In accordance with the order of the Government of the Russian Federation dated 15 on July 2013 of the year No. 1221-r on the shores of Gelendzhik Bay from 4 to 7, September 2014 of the year (the territory of the testing and experimental base named after G. Beriev and Gelendzhik Airport) will be held by Gidroaviasalon -2014. The products of the leading defense enterprises of Russia will be presented there. On the eve of “Gidroaviasalon”, Boris Obnosov, Director General of Tactical Missiles Corporation, told about the samples and promising designs presented at the exhibition.

- Boris Viktorovich, what new developments of the corporation can be seen at Gidroaviasalon-2014?

- Our company is one of the main and stable participants in this exhibition. In almost every one, we try to present our innovative developments, the latest weapons and military equipment. So this time there will be something to see at our exposition. Among the exhibits - aviation means of destruction (TSA):

Let me emphasize that all of them are included in the armament of the perspective aviation complex of front aviation (PAK FA) T-50.

A model of the small Kondor-E spacecraft will also be exhibited, a number of other samples, which, I repeat, can be found at the exhibition stand of the corporation.

- “Gidroaviasalon-2014” primarily has a maritime orientation. What are you going to surprise and delight sailors?

- The TRV Corporation supplies for the Russian Navy and for export a whole range of systems, among which the APR-3E anti-submarine rocket (developed by SNNP "Region"), designed to destroy modern and future submarines in any positions, can be marked off. - surface, under the periscope, underwater - at a depth of 800 meters. 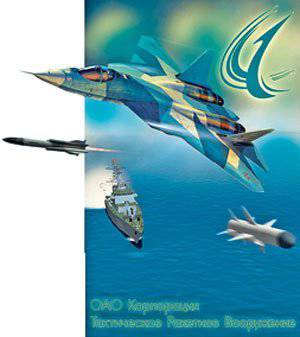 A unique armament system based on the Shkval-E high-speed underwater missile (developed by Region Research Park), which has no world analogues, deserves to be noted.

The original small-size anti-submarine complex “Package-E / NK” with an anti-torpedo (developed by GNPP “Region”), designed to defeat submarines in the near zone of the ship and destroy enemy enemy torpedoes, stands out among the naval defensive armament.

At Gidroaviasalon, the corporation demonstrates export versions of marine systems:


- All these export samples are made, apparently, in the framework of the state defense order. And how are the works on the implementation of other tasks GOZ?

- Currently, the level of the state defense order has increased significantly. As part of the LG-2020, for example, we are preparing an almost complete update of managed TSAs. Some of them I have already named.

In general, over the past three years, about a dozen new products have been tested in the corporation. In the next four years, twelve more tests are to be completed. And this is only a part of the big work that enterprises of the corporation have to do in connection with updating their main product line. Now we are entering the most difficult stage of mass development of mass production of new products.

If over the previous two decades, mass production of only four missiles was launched with significantly smaller production volumes, in the current period not only the product range and volumes, but also their technological complexity associated with the widespread introduction of the latest global scientific and technical achievements in the field of high precision weapons.

Receives a new impetus for the development of marine issues. Today we have a great experience in underwater weapons. We are at the final stage of manufacturing a number of products that will soon begin to enter into service with the Russian Navy.

- If I understand correctly, all this suggests that the corporation managed to overcome the negative consequences of 90-ies in terms of the decline in the scientific, technical and technological level of enterprises?

“The intensive work on the technical and technological modernization of production and the experimental test base carried out over the past decade is already yielding tangible results.

At present, the corporation has a number of critical and breakthrough technologies that meet the advanced domestic level and ensure the creation of competitive innovative products. The unique bench test base of enterprises allows for comprehensive experimental testing of rocket and space equipment of any complexity.

Moreover, work on the modernization of production and testing bases continues. Today, within the framework of the federal target programs for the development of the defense-industrial complex (FTP of defense industry complex) up to 2020, the 104 project for the implementation of modern technologies is being implemented. Their completion will allow enterprises of the corporation not only to ensure the fulfillment of HPG-2020 tasks, but also in terms of technology, to come close to the world level of high-tech, high-tech production.

- And how has the TRV corporation in general changed lately and what is it today?

- At present, the integrated structure headed by OJSC Tactical Missile Weapons Corporation consists of 25 enterprises located in the 13 regions of Russia, which employ about 40 thousands of employees.

Organizationally, the corporation forms a unified system of design bureaus and serial factories, which ensures the production and technological cycle for the development, production and testing of high-precision aviation, land-based and sea-based weapons, including missile systems, propulsion systems, elements of onboard equipment, combat equipment of strategic ballistic missiles, space systems and other auxiliary equipment.

The Corporation works steadily in the prevailing market conditions, in a timely manner fulfilling its obligations under the state defense order and international contracts.

Over the last decade, the combined company's revenue increased from 5,7 billion rubles to 58 billion in 2012. In 2013, the total sales of the corporation as an integrated structure exceeded 77 billion rubles, which is 31,3 percent more than in 2012.

A significant increase in revenue for the last reporting year is due not only to the entry into the corporation MIC NPO Mashinostroeniya. The contribution of other leading enterprises to the overall result is no less significant. The output of the head company alone in 2013 for the year amounted to 9 billion 137 million rubles, which is 21,3 percent higher than the result of 2012.

- But all these indicators are, so to speak, of the Russian scale. How do you look at the background of leading western firms? What are the positions in the world ranking table at the present time is the corporation TRV?

- According to the total volume of production (in terms of value), the corporation is in the first hundred of the largest defense companies in the world.

The total revenue from the sale of finished products of the integrated structure of the corporation in the business area of ​​aviation weapons is about 10 percent of world production, in the field of naval armament - more than 15 percent.

New types of precision weapons, which are currently on the way to launching into mass production, are not only not inferior to the best world analogues, but also surpass them in a number of tactical and technical characteristics. Unique and a number of marine systems.

At present, the corporation plays a leading role in the country in exploring a new promising, extremely complex area related to the implementation of the scientific and technical groundwork accumulated so far in the development of hypersonic weapon systems.

The relevance of this work is due to the need to respond to the global challenges to the national security of Russia due to the desire of individual countries to get a monopoly on a new generation of strategic weapons using hypersonic systems of “global military domination” - the concept of the so-called rapid global strike (US program: Prompt Global Strike, PGS ).

- Sick subject - Western sanctions. Do you have an import substitution program and how does it work? What problems have you come across?

- As for import substitution, this task is not new for us, and we began to solve it long before the events in Ukraine.

Today, under the program of import substitution, we have removed the main problems. Currently, for all our products, Russian engines are supplied with the exception of the X-35E anti-ship missile in the export version, which uses the engine of the Ukrainian company Motor Sich. At the same time, our deliveries under previously concluded export contracts have been almost completed. We are ready to continue our cooperation with the consent of the Ukrainian side, which is also interested in the implementation of export contracts. In case of negative developments, we have worked out the issue of creating a Russian version of the engine.

TRV Corporation cooperates with the Kiev company "Artem", producing aviation rocket armament. Most of the components for the production of "Artem" produced in Russia. In the presence of an appropriate political decision of the parties, we are ready to continue shipping our products for Ukrainian exports to third countries.

The general problem of defense enterprises is the production of electronic equipment. It is necessary to increase the production capacity of modern products. The state armament program requires a serious intensification of work in this area.

- Now, as you know, the arrangement and strengthening of the grouping of our troops in the Crimea is underway. At the enterprises of the corporation coastal rocket complexes are being created. Perhaps they will be required for the formation of a system of anti-ship defense of the peninsula?


PBRK "Bastion" is able to cover a stretch of coastline with a length of 600 kilometers and hit enemy surface ships at a distance of up to 300 kilometers under conditions of intense fire and electronic countermeasures.

The Bal-E DBK, created on the basis of the spent Uran-E ship complex, is designed to combat the widest and most widespread spectrum of sea targets with a displacement of up to 5000 tons. Acting on targets at distances up to 120 kilometers, Bal-E is able to fire at 32 targets at a time (singly or in one gulp), then repeat shooting after reloading. Modernization of the complex by equipping the new anti-ship missiles of the X-35UE type will significantly expand its combat capabilities.

The joint balanced application of PBRK Bastion and Bal-E ensures the solution of target allocation tasks in the most rational way.

As for the specific use of our missile systems in the interests of providing coastal defense in a particular region of Russia, this is the prerogative of the Ministry of Defense of the Russian Federation.