Sad and sorry for them 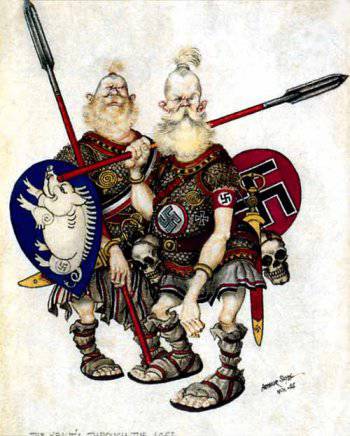 The situation here is this: all the actions of the ukroklopovaya army remind me of the actions of the disrespectful Grachev during the first Chechen period. After some time, Kiev, when it becomes absolutely bad, will go to reconciliation and negotiations, in order to prevent the "wave" to the Kiev oligarchs. Here the most important thing is not to succumb to this snag. Based on the nature of the conflicts of recent years in different parts of the world, it is necessary to conduct negotiations in which the Russian side will participate, and on the perimeter of Novorossia put up blocks of "grads" to suppress the "second Chechen". I think that they will understand me correctly, I am about strategy, and not about Chechens.

You can not trust the Nazis.

My father, born a month later than October 1917, grew up in a Ural village. And like all young people, by the mid-thirties he dreamed, if he was in the army, then a tankman (why not a pilot, this is his secret). In the 37th year, ascribing himself a year, he graduated from the MTS courses, and, of course, was drafted into the army, in the training of Krivoy Rog. Then he studied at the Odessa Military-Political School and took an active part in the war for the "liberation of Western Ukraine." So there Stalin and Hitler divided the territory of Austria and Poland. My father sparingly and with some shy smile told me how they “drenched” the German Tanks. He answered my question, since the border was approximate, so they competed who would take which town first.

“We go to the town first, beat the tedvushka at the entrance - it blocks the street with its“ on the ass. ”Meanwhile, we mark the border. The southern territories that were lost in this section (they are questionable), Poland’s territory ... different estimates .. somewhere around ten thousand.

Then, in the fortieth, my father completed a one-year political training course. About Odessa, he told me - the city in which I would like to live.

Then, at night, in the first hours of June 22, they were alarmed and they took up defensive positions. At three forty the first assault groups were flooded. I was very surprised by my father's passing phrase: "... we managed to bury our first dead only in eleven days."

Then, the uncontrollable retreat began, when will we fight for Lviv? - We will not. This is an architectural treasure of the whole world. Father drove into the city in the lorry, in order to collect food for his division. Robberies shops in full swing. We left the city - to meet Bethashka with a general who was foamed from a misunderstanding. “Guys,” he shouts, “I’m looking for my part, if you are going to the crossing, then don’t go there.” We shoved. And from some mound they saw how the fascist airplanes “ironed” the crossing. And on the crossing were only women with children. It is impossible to forget.

That's what a shame - when you're young, you think about girls (nature). Years pass and you start to think about justice. My father led the group to destroy the first bridgehead on the left bank of the Dnieper. Then Kharkov operations. Then Stalingrad, where my father "earned" in one battle and the Order, and BZ, and three wounds.

This whole situation in modern Ukraine is very, very sad ...