Ukraine is the country of the future 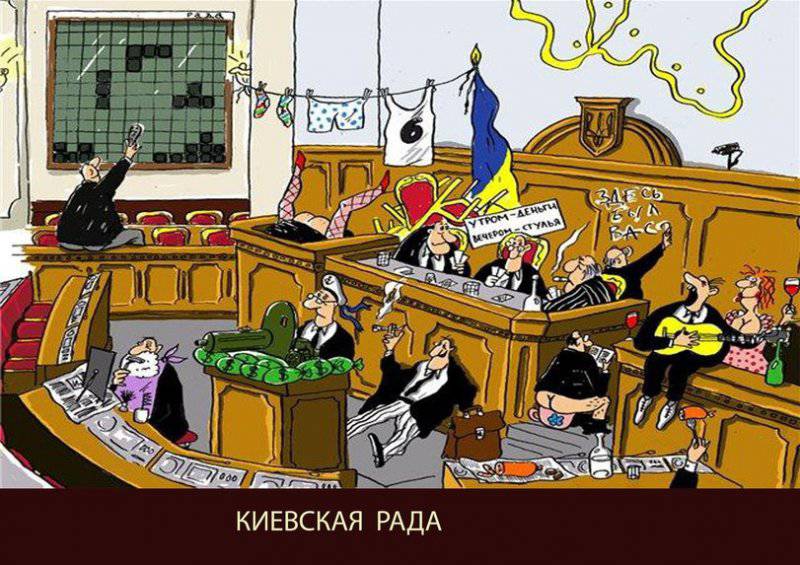 Sorry for the uneven handwriting, I write on the tablet, which jumps from the hryvnia exchange rate. More precisely, constantly failing. So, the news of holding the long-awaited early elections of the damned, fully corrupt Rada was greeted with tears of gratitude in his eyes. The situation in the country and beyond, which still have slightly vague outlines, has stabilized sharply. The already mentioned (not the night) national currency continues to delight with its exquisite peak, steadily approaching the “15” mark.

As for me, there is no sense in high-profile headlines like "Hryvnia beat another historical minimum". She does it regularly, every day. Everyone is happy, admiringly watching the change of numbers at gas stations and congratulating each other with approaching European standards. “If this goes on, then soon gasoline will be more expensive than in their European Union,” rubbing his hands dirty, says refueling Nikolai, who readily comments on the pricing policy of oil companies using scientific terms such as “ass”, "P ... c", "shit." But in general, he is positive and fully endorses the policies of the president, Arseniy Yatsenyuk in general, and the head of the NBU in particular.

The head of the National Bank, of which it is only known that she is a natural blonde, is not optimistic about the latest record results of currency trading on the interbank market. This gives hope for speedy stabilization of the course and growth of the well-being of ordinary citizens in the near future, marked by the dates of “born-died”. The old-timers of the interbank market remember how she single-handedly strengthened the hryvnia rate by eight kopecks with the help of the interesting word volatiamnost. In this regard, everyone is confident that the nation is consolidating at an unprecedented pace, as evidenced by the growing number of blue and yellow paint being sold, as well as the constant increase in the number of citizens wishing to vote for the first leader in Ukraine with unconventional orientation Oleg Lyashko. Many are confident that in the future composition of the Verkhovna Rada, Oleg's political force, in the name of which there is a particle “feces”, will form a stable parliamentary majority, and those who are called today a minority will automatically become “Bolsheviks”.

Once again I would like to thank the party and the government for the early parliamentary elections. It's just like the light at the end of a long tunnel, illuminating the sign "Don't get in, bitch, kill!" Things are getting better. The optimistic mood of voters is felt at every corner. Their attitude is conveyed to the ATO press service, which never ceases to please us with the outstanding achievements of the Ukrainian troops in dismembering Russian tank columns. "Dismembered" goes in a continuous stream. Right in the morning, without even drinking their morning coffee, the NSDC speakers managed to deal with the armored column of the RF Ministry of Defense, in which there were over a hundred vehicles. Particular attention was paid to the fact that some runic symbols in the form of white circles, as well as mysterious triangles of an unknown color, were applied to tanks and other armored vehicles of the enemy. However, this did not prevent the use of high-precision weapons destroy Russian saboteurs. They had passports of citizens of the Russian Federation, certificates of saboteurs, extracts from the orders on the treacherous attack on the territory of Ukraine, as well as a photo of Vladimir Putin in his youth.

Tactical regrouping of ATO forces continues successfully. Our troops have already reached the outskirts of Rostov and, according to adviser to the Minister Arsen Avakov with the name Shkiryak, they are conducting quarterly clearance of this settlement. The fact that the Russians do not see them is a problem for the Russians. Once again, Ilovaisk was taken, which this time stormed from twelve sides. As a result, ninety percent of this settlement is under the control of volunteer battalions, and in general, the Ukrainian army owns the left half of Ilovaisk, so the battles are on the outskirts. The ATO forces successfully repel attacks in the forest plantation, the situation remains stable. Saur-Tomb is under the personal control of Tymchuk. Dmitry regularly refutes information about her capture by the militia and reflects up to ten attacks of brutal Russian troops per hour. Sometimes more. How to go. Everyone in the ATO zone is confident that the elections in the Donetsk and Lugansk regions will be free and democratic, so they are doing everything possible to repel Russian aggression, concentrating significant forces in the Mariupol region. This tactical move is designed to drive the enemy crazy, which will inevitably fall into the trap near Kharkov.

As analysts predicted, the negotiations in Minsk became a major diplomatic victory for Kiev. No wonder that the supreme commander modestly stated that at meetings with his participation the fate of the entire observable world is decided.

Mars was pretty quickly resolved by everyone, but with Jupiter, certain disagreements arose over Putin’s stupid position. However, a breakthrough was achieved. Everyone at the mini-summit with the participation of a woman who refutes the man’s descent from a monkey and suggests horses was the only one to discuss the peace plan of the commander-in-chief in the southeast. “Where does he get such a wonderful, peaceful plan ?!”, the attendees admired. Even the Asian Nazarbayev, in whose possessions a lot of legendary things grow, was forced to recognize the superiority of Kiev in this matter. The only moment that nearly overshadowed the monstrous geopolitical success of Ukraine is the handshake between Putin and Peter Alekseyevich. There was a stormy discussion on Twitter, and everyone came to a consensus that Poroshenko should spit in the shiny Kremlin sky, then to sing the anthem of Ukraine in a well-placed voice. Unfortunately, hopes were not justified. But the commander-in-chief changed so greatly in the face at the time of physical contact with Putin that this reincarnation aroused the delight of all users of social networks. It was an unsurpassed masterpiece of acting. One cannot look without a shudder at the art of true reincarnation. Even Catherine Ashton was frightened and looked around for a suitable shelter. But the toilet was far away, so I had to restrain the urge by a monstrous effort of European will.

All Ukrainian people, however, supported the outcome of the Minsk Summit, as it was necessary for the consolidation of the nation. No wonder that all of Kiev was painted in yellow-blakytny color. Logic catch? Not? And she is.

And finally, I will talk about the mysterious events that occurred at a meeting of the political council of the Batkivshchyna party. A collective, I would even say, demonstrative demarche took place there. Whole 16 members of this legendary association left Yulia Tymoshenko, thus demonstrating the steady will to consolidate the already mentioned nation. These events fit into the ATO's winning logic. Arseny Yatsenyuk, Oleksandr Turchynov, Arsen Avakov, other members of the government made Tymoshenko clearly understand that, in their opinion, she was not satisfied with their presentation of racial harmony. To be honest, I am outraged by this anti-gender approach. She, them, blah, in a garbage dump found, picked up, warmed, led out to people. And now these people "figvamy" draw her. Moreover, Arsen Avakov called Yulia Vladimirovna a “former partner” and hinted that he should remain “friends”. It seems to me that such an attitude towards a woman is not permissible. Now Tymoshenko is de facto the only official opposition to the supreme commander.