July 21 2011
4
Evidence of top-class shooting skills at all times was the destruction of the enemy sniper. Finding the location of someone else's sniper is always very difficult - an experienced shooter carefully masks his position. Therefore, in the end, the essence of counter-sniper events most often boiled down to forcing him to shoot and thereby reveal himself. Before that, the sector of the area where the sniper could have been located was carefully studied, and the places of his possible “laying-up” were determined. Of course, it is not always possible to detect a position by the flash of a shot and smoke: a sniper can shoot from a rare bush (“curtain effect”) from a thick tree crown, from the depths of a room.


A very common technique that has come down to our time is the use of a doll (dummy). The dummy was made in accordance with artistic tastes, local characteristics and the availability of scrap materials. Most often it was constructed from an old uniform, stuffed with rags, a hat or a helmet was put on his head. An assistant sniper showing a “doll” was obliged to show imagination and a sense of proportion: a sniper should not have even a shadow of a doubt that he was a living person. Therefore, the scarecrow, although it had to move, but at the same time did not demonstrate a clear desire to substitute under the bullet. In the conditions of defense, one model of a head with a helmet was shown, but an experienced sniper rarely came across such bait. 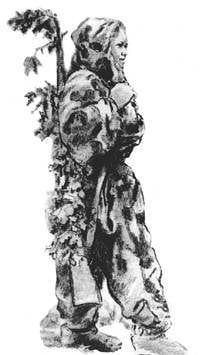 There was a more elegant way of working with dolls: one sniper (hunter) made several shots at enemy positions, discovered himself and then showed a scarecrow, allowing the enemy to "kill" him. Another sniper, who was at that time on a carefully camouflaged “bed”, he detected flashes of shots and destroyed the enemy sniper.

The classic sniper case is a duel between Vasily Zaitsev and Major Konings, head of the Berlin sniper school. During the fighting in Stalingrad, the German command, concerned about the activity of the Russian "super-mark shooters," decided to destroy the "main Russian hare" - for the edification of others and to raise the morale of its soldiers. Konings was transferred to Stalingrad by plane and started the duel first: he shot two Soviet snipers, both from the first shot. It was a challenge.

The commander of the 284 Infantry Division Colonel Batiuk summoned the snipers and ordered to destroy the German at any price. The arrival of the fascist sniper set a new task for the Soviet shooters: it was necessary to find him, study his habits, techniques and wait patiently for the moment when only one, but sure, decisive shot could be made.

There were heated debates about the upcoming fight at night in the dugout. Each sniper expressed his assumptions, born daily observation of the front edge of the enemy. Offered various options for finding targets and "bait." But sniper art is so different that, despite the experience of many, the outcome of the fight is decided by one shooter. Meeting with the enemy face to face, he is obliged to create, invent, act in new ways every time. Template in the sniper can not be.

"When training snipers, I personally attached stealth and disguise to the main importance. Each sniper has his own tactics, his own tricks, his own inventions, ingenuity. But all beginners and experienced snipers must always remember that before you is a tactical, proactive, resourceful and very accurate shooter He must be outsmarted, drawn into a difficult struggle and thereby tied to his favorite position. How to achieve this? Come up with false moves, dispel his attention, confuse your tracks, irritate with intricate movements, omlyay his visual concentration.

I am against the organization of a fundamental sniper post even in a long-term defense system. The sniper is a nomad, suddenly appears where the enemy is not waiting for him. For the fire initiative must be fought. Some clues of the enemy's rebuses will give nothing if you are not sure to pay for these tricks with accurate fire quickly and decisively ... It is more difficult for the enemy snipers to figure out. It is only clear to me - they are all stubborn. And for them, I found my method: prepare the doll well, put it on imperceptibly and start moving - the doll, like a person, should change its position. Next to the doll is your disguised position. The enemy sniper gave a shot at the doll, but it remained "alive", and then the demonstration of a persistent character begins. Makes a second shot, then prepares for the third, but, as a rule, before the third shot he hits the front sight.
Experienced enemy snipers take their positions under the cover of fire and accompanied by 2-3 assistants. Before such a "wolf" I usually pretended to be a novice, or rather, a simple soldier, and thus lull him into vigilance ... The fascist sniper quickly got used to such a target and stopped noticing it. And as soon as he was distracted by other goals, I instantly took the place of the target. For this you need a few seconds. He threw the target aside and caught the head of the German in the crosshairs of his sniper's sight. "(V. Zaitsev." There was no land for us beyond the Volga ")

So where is the Berlin sniper? Vasily Zaitsev well studied the “handwriting” of fascist snipers; by the nature of fire and disguise, he distinguished more experienced shooters from novices and cowards from stubborn and determined enemies. But the head of the school, his character remained a mystery. Daily observations gave nothing definite. It was hard to tell where he was. Probably, he often changed positions and just as carefully searched for Russian snipers, as they did him.

At dawn, Zaitsev went with Nikolai Kulikov to the positions where his comrades were wounded yesterday. For the whole day they watched the front edge of the enemy, but found nothing new. It ended the day.

But over the fascist trench, a helmet suddenly appeared and began to slowly move along the trench. Shoot? No, this is probably a trick: for some reason the helmet is swinging unnaturally - it is probably carried by the assistant sniper, while he is waiting for the Russian to give himself a shot. According to the patience that the enemy showed during the day, Zaitsev guessed that the Berlin sniper was here. Special vigilance was required.

On the third day, Political Commander Danilov set off in ambush with the arrows. The morning began normally: the darkness of the night was dissipating, with every minute the positions of the enemy were becoming clearer. A battle boiled nearby, shells sizzled in the air, but the arrows, leaning against the optics, kept a close eye on what was going on ahead.

“Why, here he is, I'll show you with my finger,” the political officer suddenly perked up. He barely, just for one second, by negligence rose above the parapet, but that was enough for the fascist to wound him. So only an experienced sniper could shoot.

Zaitsev stared at enemy positions for a long time, but could not find his ambush. The speed of the shot, he concluded that the sniper is somewhere right in front of him.

On the left is a wrecked tank, on the right is a bunker. Experienced sniper in tank won't sit down. In the bunker? Also not - the embrasure is closed.

Between the tank and the bunker on an even terrain lies an iron sheet with a small tubercle of broken brick. It has long been, already become familiar.

Where better to take a sniper post? Do not open a cell under the sheet, at night making him hidden moves. Zaitsev decided to check. He put a mitten on a small plank and picked it up. Fascist pecked. Zaitsev carefully lowered the plank into the trench in the position in which he had raised it. No demolition, a direct hit, which means a fascist under the sheet.

Now you have to lure and catch him at the front sight. It was useless to achieve this now. But the character of the fascist sniper has already been studied: he will not leave this successful position. Russian snipers should definitely change the position.

Worked at night. Settled before dawn. The Nazis fired across the Volga. It got light quickly, and with the arrival of the day the battle developed with a new force.
The sun has risen. Kulikov made a blind shot: the sniper should have been interested. The snipers decided to wait out the first half of the day, since the brilliance of the optics could give out their position. After lunch, their rifles were already in the shade, and the direct rays of the sun fell on the German position. Something glittered at the edge of the sheet: either a random glass fragment, or a sniper scope.

Kulikov carefully, as only the most experienced sniper can do, began to lift his helmet. Fascist shot. Kulikov rose for a moment, cried loudly and fell silent.

The Hitlerite thought that he had finally killed the Soviet sniper, whom he had been hunting for four days, and leaned out from under a sheet. Zaitsev also counted on it. Shot. The fascist's head has settled, and his rifle's optical sight, without moving, glistened in the sun until the evening. 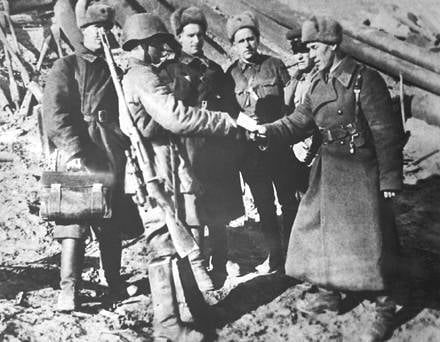 The head of the political department of the 284 Infantry Division, Lieutenant Colonel V.Z. Tkachenko presents the candidate card to the sniper of the 1047 Infantry Regiment under Glavstarshin V.G. Zaitsev. 1942

“I subdivided the detection of a target in the enemy’s camp into two stages. The first one began with an examination of the enemy’s defenses. Then I learned where, when and under what circumstances our soldiers were wounded ... I refer to the step of determining where to look for the target.

The second stage, I call the search goal. In order not to fall on the front sight of the enemy sniper, reconnaissance by observation of the terrain was conducted with the aid of a trench periscope or an artillery tube. The optical sight of a sniper rifle or binoculars in this case are not suitable. Experience has shown that where there was a revival of the enemy before, and now you will not notice a single unnecessary movement, it means that a hardened predator has sat down there. That's why I told my snipers: I didn’t study the situation, I didn’t talk to people - don’t worry about it. In the sniper case, one should adhere to the principle “Measure seven times - cut one”. And indeed, to prepare an accurate shot, you need to work hard, invent, study the character, strength of the enemy, grope his weak points and only after that start solving the problem with one shot ". (V. Zaytsev." There was no land for us beyond the Volga ")

The quality of the rifle training of Russian snipers during the Great Patriotic War is evidenced by the fact that in the post-war years many of the former "super-pointed shooters" became the leading shooters-athletes. For example, V.K. Sevryugin, a sniper of the 252 regiment of the NKVD troops who was awarded a nominal sniper rifle, participated in the World Championships in Caracas (1958), the Olympic Games in Helsinki and Melbourne. He also developed a small-caliber training pistol model based on the TT. For his shooting achievements V.K. Sevryugin was awarded the Order "Badge of Honor".

We are in Yandex Zen
"Dolls for boys"
Okhlopkov Fedor Matveyevich - sniper of the Great Patriotic War
4 comments
Information
Dear reader, to leave comments on the publication, you must to register.