Satan’s Successor Will Get 15 Nuclear Warheads 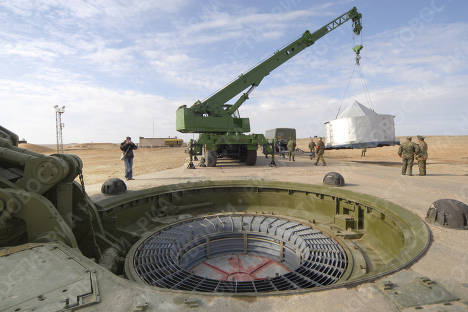 
According to Izvestia, before the end of the year, the Ministry of Defense will place an order for a new liquid ballistic missile, which will replace the famous RS-20 Voyevoda (or Satan, as they are called in the West).

The new project appears in the State Weapons Program under the working title “Breakthrough” or “Inescapability”. Now the Ministry of Defense is finalizing a technical assignment for the future car, on the basis of which the Makeyev Design Bureau will prepare a final draft.

In Izvestiya Design Bureau they said that the new liquid ballistic missile will significantly exceed the RS-20 “Voyevoda” - throw up to 15 medium or up to 10 heavy nuclear warheads over a distance of 10 thousand km.

At the same time, new missiles will be placed in the same mines in which 30-year-old Voevods are now living out. The “Breakthrough” will start in the same way as the PC-20, with the help of a mortar: a rocket will be thrown at 20 – 30 m above the mine with a special powder gun, and only after that the first stage engine will turn on.

“The main emphasis in the development of the new machine is on overcoming promising anti-missile defense systems, including laser interception systems,” Viktor Esin, former chief of staff of the Strategic Missile Forces, told Izvestia. - For this, the new machine will implement a whole range of advanced missile defense hardware.

It is expected that the rocket will be produced at the Krasnoyarsk Machine-Building Plant, where other Russian liquid-propellant rockets, the Blue and Liner, are being assembled today.

In the state program of armaments up to 2020, 2020 billion rubles will be spent on the creation of mass production of new missile systems up to 77. Of these, only for the development of enterprises - 15 billion rubles. Krasnoyarsk Machine-Building Plant will receive half of this amount for the modernization of production to produce a new type of missile.

Such infusions should provide a dramatic increase in the production of missiles by 2013, from the current 5 – 7 units per year to 20 – 30.

It is noteworthy that the main enterprise of the project, Makeev Design Bureau, has always developed missiles for submarines, and Proryv will be its first land project.

Not so long ago, KB put into service fleet a new intercontinental sea ballistic missile RSM-54 Sineva for the project 667BDRM nuclear submarines of the Dolphin type. This liquid machine is considered one of the best in its class by the criterion of "mass of the rocket to the weight thrown by it." With a weight of 40 tons, it delivers up to 11 thousand km to 10 nuclear warheads.

On the basis of "Sinevy" another complex was created - "Liner", with improved missile defense systems. In 2011, he passed successful tests from the Yekaterinburg nuclear submarine. It is possible that these systems will receive a new land rocket.

In addition, it was on the “Lyneer” that new, increased in power warheads were tested, which could become the basis of the “Breakthrough”.

At the same time, another Russian missile developer, the Moscow Thermal Engineering Institute (MIT), which has always built land-based missiles, with great difficulty completes its first naval project, the Bulava.

- It is puzzling that the "sea" design bureau is engaged in the "land" missile, - said Vadim Kozyulin, a professor at the Academy of Military Sciences. - Will we have the same история, as with the Bulava: due to the lack of experience in developing "sea" missiles from MIT, the deadlines for putting it into service were postponed several times.

The RS-20 "Voevoda" is considered the heaviest and most effective intercontinental ballistic missile in the world. Its weight is 200 t. Flight range is 11 thousand. Km. The rocket carries 10 ten nuclear warheads with a power of 550 kt each. Their power is enough to wipe out a city the size of New York or even a whole country. The rocket is immune to the action of an electromagnetic pulse, which makes it reliable weapons retaliation in case of aggression against Russia. For this, in the West, they called her "Satan" - "Knight of the Apocalypse."

However, the "Voivode" is aging. The first samples appeared in the army in the 1970 year. The latter are at the start of the 1990. All such missiles in Russia 58 pieces. They have 580 nuclear warheads from 1,5 thousand, authorized by the new Russian-American strategic arms reduction treaty (START). However, they will be able to live to see the creation of the next generations of Voivode missiles - they are regularly renewed their resources.

We are in Yandex Zen
Nuclear potential of China: history and modernity. Part 1
Russian-Ukrainian rocket "Dnepr" broke through the emerging space blockade
8 comments
Information
Dear reader, to leave comments on the publication, you must to register.