Yatsenyuk was going to put pressure on the Ukrainian oligarchs. Has the stick increased?

August 27 2014
32
Continuing not to pay bills Ukraine is in a position to find ways to fill its budget. With a growing external debt, the government feverishly clings to every chance to “find reserves” so that the economy does not shatter into pieces after hitting a huge sea cliff on which circumstances carry the fragile Ukrainian economic vessel. One of the recent ideas of the “captain” Yatsenyuk about the budget filling is connected with the need to “oblige” Russia to return the “Crimean debts” and, moreover, put pressure on the Ukrainian oligarchs in order to force those to fork out in tax terms for the “prosperity of Ukraine”. Well, if the Kiev junta has constant complaints to Russia, then there is no particular point in paying attention to the next claim. But the grandiose idea of ​​Yatsenyuk to make ukrooligarhov pay “sufficient” funds to the budget of Ukraine is a topic that requires special attention.

A person who meets with the combination of “Arseniy Yatsenyuk - Prime Minister of Ukraine” for the first time can say that, they say, what a wonderful politician! .. They say that others in his nomenclature position only think about how to fill their own pocket , and Arseny Petrovich is all about Mother Ukraine to take care of her budget, and, therefore, about every Ukrainian separately. This premier, to be sure ...
But people who are informationally familiar with the activities and position of Yatsenyuk’s “prime minister”, after he said that we should take oligarchic circles by the lapels of the jacket, can seize homeic laughter. After all, the only thing that “shaking” oligarchs for the fullness of the Ukrainian budget is going to be a person who, as they say, is flesh of oligarchic circles, is already interested.

Mr. Yatsenyuk owes his current position to Western support and money for the same Ukrainian oligarchs, one of whom is the sunflower leader of the Ukrainian nation Petro Poroshenko. It Poroshenkovsky assets and allowed Yatsenyuk "ride" Maidan wave and be in the place that he occupies now.

If so, in what way is Yatsenyuk going to put pressure on the oligarchs financially? And did Yatsenyuk grow up with such an “oligarchaver”? 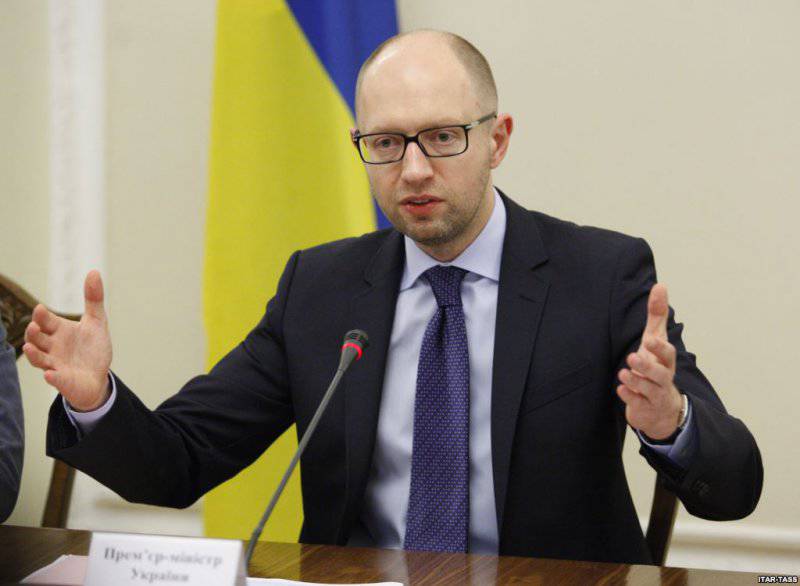 There is an opinion that the Prime Minister of Ukraine made his statement, let's say, along a dual route. First, the path of cheap populism - the divorce of those Ukrainian citizens who still naively believe in the government’s concern for the people. Secondly, on the way of pressure on the oligarchs, who are on knives with the oligarch, sitting in the presidential chair.

The populism of the “I will make the rich pay” format in the absence of Russian gas can really warm someone’s naive Ukrainian soul, but no more. But with the oligarchs who are on the way to the monopolization of power by Petro Poroshenko, the junta may well act hard - as tough as the oligarchs themselves can allow. Obviously, the main Yatsenyuk arrows in this regard can be aimed at Kolomoisky and Akhmetov, who continue to be a very significant obstacle for Poroshenko as a government official, who is going to not only get final access to Ukrainian assets and resources, but also provide such an opportunity for American henchmen. In such a big game, billionaires, who have their own interests in Ukraine, will clearly prevent Poroshenko from moving towards his goal.

Thus, the statement by Yatsenyuk that the government is going to replenish the treasury at the expense of the oligarchs is also a kind of probing the soil to see if Kolomoisky, Akhmetov and other owners of the “factories, newspapers, steamers” will be loyal both to the Kiev authorities and to the course , on which the American government put Ukraine. They are kind of forced to pay to ensure that they continue to have the opportunity to continue to conduct their activities - perhaps, to conduct activities no longer on the scale in which the oligarchs themselves would like (for example, Akhmetov’s scales are very dim lately, and Firtash is dim even with the near future), but still continue without straining the puppeteers.

Today one can observe that the same Kolomoisky is clearly not ready to become just a cog in a large system. Kolomoisky's dream is his own unlimited power in Ukraine, to which he is gradually striving. Just putting together an actual mini-army of its own - militants serving its oligarchic interests under the slogans of the struggle for “independence”, is a signal indicating that Kolomoisky wants to be not in the system, but above the system. He wants to be able to complete control over it, and therefore "content with" only the Dnipropetrovsk region is clearly not going to.

And if so, then did the words of Yatsenyuk frighten Mr. Kolomoisky? Kolomoisky knows perfectly well that Yatsenyuk’s position today is such that it’s worth only throwing a couple of tens of thousands of dollars to the right-wing Yarosh and controlled media, and they will quickly make rabbit meatballs, even if they don’t plan a new Maidan, to donate Yatseniuk’s “exploits” at the post premiere. Only one information repeated many times at UkroSMI that the fall in Ukraine’s GDP by the end of the year will be at least 6,5% with the “brilliant” management of the economy by Yatsenyuk can cost Yatsenyuk his chair along with all his wishes. Therefore, for the “fight” “Yatsenyuk-oligarchs” Arseny is clearly not yet mature enough. And all his words about the need to take over the breasts of oligarchs are more like humor in short pants.