US Senators dream of a Third World War

August 27 2014
62
The famous American bill "On the Prevention of Russian Aggression" (The Russian Aggression Prevention Act, RAPA) criticized Steven Starr (Steven Starr) - a scientist, director of the clinical laboratory of the University of Missouri-Columbia, a senior researcher of the Doctors for Social Responsibility organization. 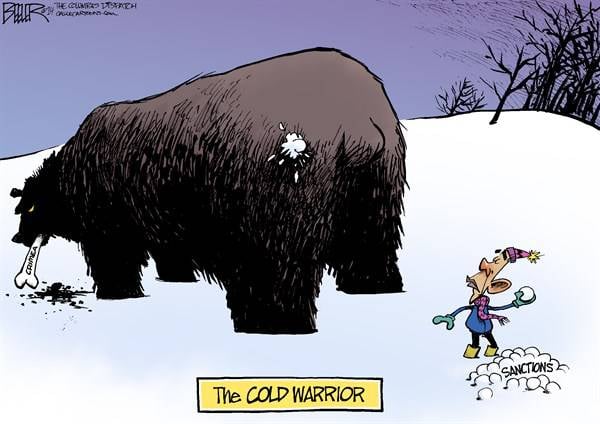 The draft law “On Preventing Russian Aggression”, presented in the US Congress by Republican Senator Bob Corker (from Tennessee), leads, according to the scientist, to a direct US military conflict with Russia in Ukraine. But any war between the United States and Russia is likely to "quickly grow into a nuclear war." After all, "neither the United States nor Russia will be ready to admit defeat," and "thousands and thousands of nuclear weapons ready for immediate use, "with both powers relying on" military doctrine allowing for a preemptive strike. "

The scientist further recalls that Germany “rightly” fears the deployment of NATO and US troops, as well as the US missile defense systems in Ukraine, since it takes into account Russia's long-standing objections to NATO expansion, especially to Ukraine and Georgia, and objections regarding the deployment of European missile defense. Germany is keenly aware of the possibility, Starr writes, that a civil war “raging” in Ukraine could turn into a war between Ukraine and Russia. Under such circumstances, the United States and NATO, which have deployed forces in Ukraine, will almost inevitably "engage in battle with Ukraine against Russia."

Meanwhile, the mentioned act “On the Prevention of Russian Aggression” (RAPA) provides for the acceleration of the “implementation of the third phase ... of the European missile defense ... no later than the end of the 2016 calendar year."

RAPA establishes that the US Department of Defense will receive the task of assessing the capabilities and needs of the Ukrainian armed forces, as well as “empower the president to provide this military assistance to Ukraine upon completion of such an assessment.”

According to RAPA, the United States must supply Ukraine with 100 millions of dollars of military equipment and weapons (anti-tank and anti-aircraft, grenade launchers, machine guns, ammunition, and many others).

In fact, the United States can subscribe to using the full power of its state to "protect the independence, sovereignty and territorial and economic integrity of Ukraine and other sovereign states in Europe and Eurasia from Russian aggression."

Further, the act also mentions the notorious defenseless in Europe - Poland, Estonia, Lithuania and Latvia - which the US and NATO should take special care of.

But after all, on August 5, the Office of the United Nations High Commissioner for Refugees reported that 740 thousands of eastern Ukrainians had moved to Russia. Their transition to Russia fully explains the fact that "Russophobes in Kiev" are ready "to indiscriminately bombard their cities," the scientist writes. The doctor calls what is happening in the east of Ukraine “ethnic cleansing”, during which Russians are “forcedly removed” from eastern Ukraine. And this process is "fully supported by the United States," but in addition, the draft law under consideration "would significantly consolidate this support."

The bill requires Russia to "withdraw troops from the eastern border of Ukraine." But this is the Russian border, the author is surprised. It turns out that the American legislator "defiantly demands" that Russia withdraw military forces from its own borders!

The act also establishes that "Russian troops must be withdrawn from the Crimea within seven days of the entry into force of the law."

The author considers Crimea part of Russian territory and recalls some historical facts, starting with the fact that "Crimea was part of the Russian Empire from 1783 to 1954." He also recalls the referendum in Crimea. It turns out that in the eyes of Russia, the demand "to withdraw troops from the Crimea" means the American demand for Russia to surrender its own territory.

The purpose of the "transition" of the Crimea to Ukraine was recently supported by the Minister of Defense of Ukraine, who "was applauded by the Ukrainian parliament" when he declared that the Ukrainian army would hold "a victory parade in Sevastopol."

The scientist writes further that "any large-scale attack of the Ukrainian army on the Crimea will make war with Russia inevitable." However, Ukraine seems to be preparing just for such an attack, which forcibly attracts all men from 18 to 60 to military service.

The act “On the Prevention of Russian Aggression” is the path to a US nuclear war with Russia, the author believes. The US / NATO clash with Russia will instantly alert American and Russian nuclear forces. Both sides will wait for the first nuclear strike: after all, the military doctrines of both countries allow for preemptive nuclear strikes.

The US has 180 B61 nuclear bombs deployed at six military bases of five other NATO countries. Russia has at least 1300 tactical nuclear weapons. However, any use of "tactical" nuclear weapons can cause a similar or more powerful response from the other side, the scientist is sure.

Tension in May 2014 in Ukraine has already led both nations to an almost simultaneous "nuclear game", reminds Starr. Russian nuclear bombers "tested" US defense from July 29 to August 7.

“The American and Russian leaders either don’t know or simply ignore the fact that such“ games ”and“ tests ”are the dress rehearsal for the destruction of humanity,” Starr writes bitterly.

Special scientific studies show that even the use of only a part of the US nuclear arsenal and (or) Russian nuclear weapons in a war is likely to destroy the human race, the scientist reminds.

According to researchers, even a “successful” preventive nuclear strike that would destroy 100% of Russia's nuclear forces before Russian missiles could be launched would lead to catastrophic global climate change. Agriculture on the planet will stop: for many years the land will not produce crops. Result: most people and large animals will die of hunger.

The scientist calls nuclear war "suicide for man." However, according to him, the state "leaders still have a hand on the nuclear buttons."

The ignorance of the US federal government and the American public, the author sums up, threatens the world with the danger of nuclear war. The Russian Aggression Prevention Act, if adopted, will lead the United States to a direct nuclear clash with Russia.

And in the meantime, let us add, the United States is only doing what it seeks to accuse Russia of provocations.

As 26 August wrote the Ukrainian edition of the magazine "Forbes"Washington is concerned about Moscow’s plan to send another humanitarian convoy to the east of Ukraine, and therefore it will be considered a provocation.

This was reported by the famous gosdepovskaya press secretary Jen psaki. “We are unequivocally concerned about Russia's plans to send a second convoy. Any new mission without the explicit permission of Ukraine will be another provocative event, exacerbating the situation, which, as President Putin claims, he wants to solve, ”the publication quotes her words.

She also stated that it is impossible to wait for the international community to believe someone who says one thing and does another.

Is it really about Russia?