Is there in Donetsk 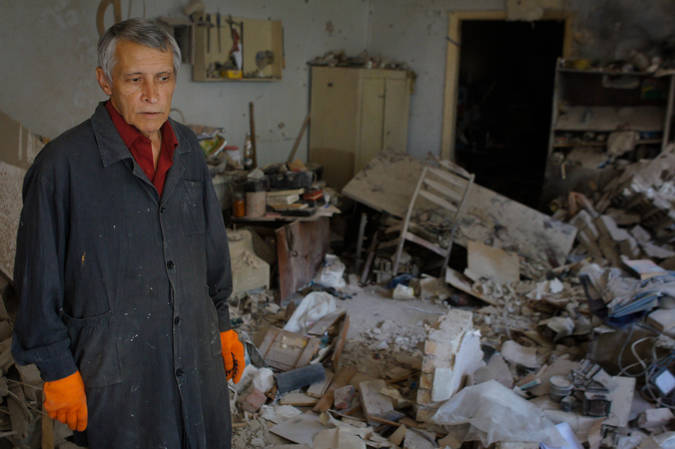 The story of everyday life in the capital of Donbass. Without mentioning how many shelling was last night, and how much this morning.
Everyone has heard that there seems to be a humanitarian catastrophe in Donetsk. There is nothing and no water. It is not true. Water supply, which stopped literally at one o'clock throughout the city, was absent for more than three days, has been restored. A group of technicians under the threat of deadly fragmentation fire, restored communications. The queues at the kiosk for the sale of water "on tap" disappeared.

As for the stable operation of communications, I’m talking about the main high-rise part of the city. Areas on the outskirts remain in a very uneven position. That in one light will disappear, then gas. Somewhere there is neither one nor the other for several days. Worse is the case in satellite towns, regional settlements. Communication with Miner, Gorlovka, Ilovaisk, Yasinovataya violated. Obviously, food products and, moreover, fuel, are no longer regularly delivered there. It is they who, after Lugansk region, need humanitarian assistance most of all.

Let's go back to Donetsk. Water, a full range of food products did not disappear from store shelves. Another question is that there are few open trading floors. But this is a simple commercial logic: you do not need a lot of shops, when there are only about a third left in the city. And the money from the remaining Donetsk residents is a bit: pensions, salaries of hundreds of thousands of people in the Donbass are not already paid for 2 − 3 a month. Therefore, dairy products, sausages, and alcohol on the shelves are increasingly untouched.

In the local market are occupied no more than a quarter of trading places. Traders call almost all the fruits of the Crimean, but do not recognize how the product reaches them. Prices are kept normal:
- There are no buyers, so why should we speculate?

There are unusual paradoxes. For example, two coffee houses opened in the center, a snack bar, which closed more than a month ago due to an “unfavorable situation”. Here, obviously, the point is this. The inhabitants of course are leaving, but those who remain, including the young, are really tired of the war. And they want to surround themselves, albeit an illusory, but peaceful reality. So they return to the places that used to visit "before the war." However, all this is really few peaceful. In institutions of these you will not meet more than ten civilians at the same time.

Two sensations accompany in this city. In addition to anxiety due to the frequent sounds of firing, the roar of shells: near and far, there is a feeling of confusion, loneliness. The empty streets of the metropolis look ridiculous, unnatural.

And the saddest person I met in Donetsk was a man who titled this article with his portrait. I did not ask his name. He, shocked, shocked, could not speak.

For many years he worked in a restoration workshop at the museum of local lore. And so, he came in the morning, having received from colleagues a message about shells entering the building. Entering his office, he found only dust and ruins. He did not even attempt to unearth the restoring for so long and with love historical objects (among them, by the way, and artifacts of the Great Patriotic War). While his colleagues in the museum took out from the heaps of concrete either the helmet of the Soviet soldier, already sewn with new fragments, or the fragments of ancient dishes, he simply stood, almost motionless, not recognizing anything around.