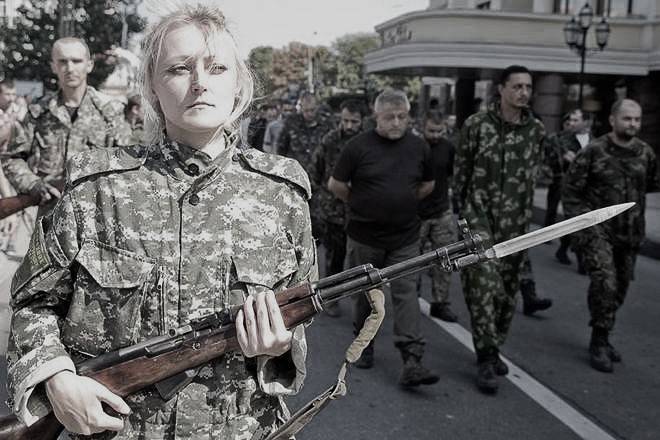 The events of recent days have marked the emergence of the conflict in Ukraine at a new stage. After the march of prisoners held in Donetsk and the beginning of the offensive of the army of Novorossia, the option of peace negotiations for a long time leaves the real agenda - now calls for a cease-fire are finally becoming only an element of the information war. Even if Poroshenko now agrees to negotiate with the rebels - the war will not stop.

The propaganda effect, which Poroshenko wanted to achieve by holding a military parade in honor of the Independence Day of Ukraine in Kiev on Sunday, turned out to be completely erased by the “march of shame” that took place on the same day in besieged Donetsk. Several dozen prisoners who were guarded throughout the central square of the capital of Donbass not only had an extremely demoralizing effect on potential recruits from the west and center of Ukraine, but also marked the end of a very important stage during the Ukrainian conflict. He is rapidly losing the signs of civil war between the two parts of Ukrainian society, turning into a war between two states - Ukraine and Novorossia.

It does not matter that Novorossia is for the time being just a rebel proto-state, which still does not have the basic signs of statehood. Ukraine was also formed randomly from the south-western part of Russia. It does not matter that both of these states have no future - because sooner or later, together or in turn, they will be part of Russia. Now they have moved from a war within one state to a war between two hostile ones. And if in Kiev they persistently call the rebels as terrorists and for the sake of their own peace of mind they say that most of them are Russian citizens, in Novorossia from now on they finally perceive Ukraine as a hostile state, with which it is impossible to agree on anything and which can only be defeated.

“These people killed the Ukrainians in us — now we are Russians!” - these words spoken by one of the speakers at the rally in Donetsk can be considered an epigraph to the new stage of the war in Ukraine. Russian - and it does not matter who the residents of Donbass considered themselves to be, Ukrainians or Russians. Because the Ukrainians are the Russians, the Little Russians, who were persistently imposed Russophobic identity.

The cleansing that the Ukrainians underwent during the conflict that has been going on for six months already returned parts of them an understanding of their own Russianness - and, on the contrary, the other part even more believed in their peculiarity and uniqueness, separated themselves from the Russian world. On both sides of the front, people who belong to the same nation, the same faith (mostly - not counting the Western Uniates), the same culture (Soviet-Russian) are fighting - but they have completely different self-identification. Some people feel their belonging to the Russian world - others are jumping to Europe. The military confrontation hardened both sides - and now only the victory of one of the parties can save the united state of Ukraine. The only question is whether a united Ukraine is needed by anyone.

“Federalization does not suit us,” said Alexander Zakharchenko, the Prime Minister of the Donetsk Republic, on Sunday. DNR considers only its own independence from Ukraine. Such statements were heard from the leaders of the New Russia before. Moreover, already at the beginning of the summer, after the resumption of the Kiev military operation, it became clear that there were only chances for a confederation. But it was after the “march of shame” in Donetsk (and stories with a humanitarian convoy) was actually passed the point of no return.

This does not mean, however, that conversations about federalization-confederalization will disappear from the lexicon of Russia and the West — on the contrary, they are now even getting stronger (as can be seen from recent statements by the German vice-chancellor). But this will be only a sign of propaganda and diplomatic struggle - in reality, the chances of preserving a united Ukraine in any form no longer exist.

Russia throughout the conflict has consistently advocated a united Ukraine, saying that it can only be preserved through negotiations, and war only buries hopes for that. Formally, Moscow is still talking about negotiations - on Monday, Sergey Lavrov urged the West to change its rates in Ukraine: “I think that with respect to Ukraine there will come an awareness of the complete stalemate in betting on support for the civil war, and that the leadership of Ukraine will use part own people, and peace reigns in Ukraine. " The minister called on the West "to influence the Ukrainian side in terms of recognizing its responsibility for their country and in terms of understanding that this is not a struggle for Ukraine against Russia, but a struggle for Ukraine as a state in which everyone can live comfortably."

At the meeting in Minsk, Putin will also talk about a united Ukraine - suggesting Poroshenko to go to peace negotiations with Novorossia. Not because Moscow is concerned about the preservation of Poroshenko’s power, the Ukrainian oligarchs or she doesn’t want to further aggravate relations with the West — but because it is easier for Ukraine to reintegrate with Russia than for Ukraine, which has split into several parts.

This is not voiced by the Kremlin - but this is precisely the main national interest of Russia. It is not to cut off a part of Ukraine, Novorossia (albeit in the amount of the entire Southeast), and throw Little Russia and Galicia into the Atlantic cauldron. And in order to methodically, stubbornly, using all means, to fight for the retention of the whole of Ukraine in its orbit.

There is no imperialism or aggression in this - it is a natural reaction of a healthy person to an attempt to cut off his infected part from him. How do you - on the ankle, knee or groin? This question is not facing Russia. How long will the treatment take, how it will be, how many difficult and risky operations are necessary - all this is discussed and everything is possible. Except for one thing, consent to an amputation that foreign “pest doctors” are trying to dislodge. That is why the Kremlin is not in a hurry with the recognition of Novorossia - you need to save everything.

New Russia is already on the mend, and it can positively affect the rest of Ukraine. Not immediately - and, alas, not at all by homeopathic remedies - but Little Russia will recover. Internal shocks and external lesions will accelerate this process. It could also be slowed down if Kiev behaved smarter and more cautious, froze the situation in the East, ceasing the military operation, closed in on itself, trying to keep what was still his. But the stubborn attempt to crush the uprising led to the fact that Kiev had already missed the possibility of a truce.

Now agreement to negotiate - even if it is received in Minsk or shortly after Minsk (and a heavy military defeat on the eastern front) - will not fundamentally change anything. No, of course, negotiations will begin, and some kind of truce may even be reached on them - but it will be fragile and unreal. New Russia no longer agrees not only on federalization, but also on the preservation of present-day Ukraine as such, understanding that it will pose a constant danger to it.

Russia and Novorossia have only one reason to freeze the situation for some time - in order to observe in Ukrainian silence the collapse of the economy and the collapse of the economy. That is, to wait a month or two for further weakening of the Ukrainian state - in order to continue the struggle for the whole of Ukraine. It will go in all forms, but the main military will remain - the war will not end in the coming weeks and even months.

It can be suspended, interrupted by “very important” negotiations and even by “real agreements” - but until the fall of the pro-Western power in Kiev (not necessarily due to the onset of the Novorossiysk army, an internal revolution is possible and even correct) this battle will not end. Reassembling of Ukraine is possible only after its completion - if, of course, Novorossia agrees to this and she has enough strength to do so.

If not, then dividing Ukraine into two or three states will be the beginning of a new stage of crisis, during which Moscow’s goals will remain the same. And then the official reunification of Novorossia with Russia will be completely natural - after the death of the Square, the only reason will disappear and continue to preserve the formal independence of Novorossia.

But all this is a medium and long-term perspective. At the same time, the West will not play a decisive role in the near future of the Ukrainian drama this autumn — its late consent to federalization changes nothing, and the United States will not allow Poroshenko’s support for Europe. Merkel's conciliatory remarks that she “would like the resolution of the Ukrainian crisis not to cause harm to Russia” are beautiful, but meaningless at the stage that the Ukrainian crisis has already reached. Moreover, against the background of the ongoing policy of sanctions and blockade by the West - that is, the desire to harm Russia - look mocking.

The US sentiment on the military suppression of Novorossia and the subsequent atlantisation of Ukraine, and Russia on the retention of the whole of Ukraine, does not allow any compromises. More precisely, some temporary compromises (local, not canceling the global confrontation between Russia and the United States) were not so long ago — but the very course of the war in the east of the former Ukraine made them impossible. It's late - the convoy has already left, the march has already passed. The offensive begins.