On the development of military-technical cooperation between Russia and Armenia 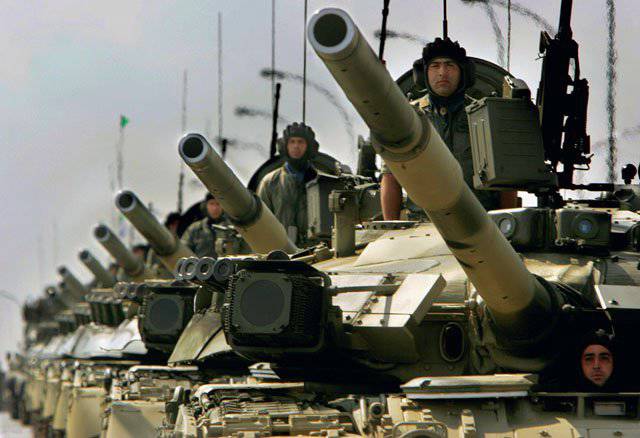 In August, traditional tank biathlon competitions were held at the Alabino training ground near Moscow, during which the Armenian national team took second place, demonstrating excellent combat training. Enterprises of the Armenian military-industrial complex presented their products at the international exhibition of weapons "OBORONEXPO-2014", which was held from 13 to 17 in August in Zhukovsky near Moscow. The presence of a strong army and promising military-technical developments, especially in such a turbulent region as the South Caucasus, is an important, if not the key guarantee for the preservation of national security.

Russian-Armenian military-political and military-technical cooperation has a long-standing history. In 1996, according to a bilateral interstate agreement, the 102-I Russian military base was established in the city of Gyumri, near the Turkish border. In 2010, Armenia and Russia signed an agreement, according to which the Russian base will function until 2044. The total number of locations for the Russian military base in Armenia will reach 21.

The next stage in the development of bilateral military-political and military-technical cooperation was the Federal Law “On ratification of the Treaty between the Russian Federation and the Republic of Armenia on the development of military-technical cooperation” signed by 28 June. This agreement regulating mutual deliveries of military products in order to equip national armed forces, military formations, law enforcement agencies and special services of the parties was concluded in Yerevan on June 25 after several rounds of mutual visits and intensive consultations of the parties.

The Republic of Armenia takes an active part in the formation of the Caucasian sector of the United Air Defense System of the CIS countries; Moscow and Yerevan will sign the corresponding agreement before the end of 2014. Already today air defense units and aviation The 102nd Russian military base on the territory of Armenia is jointly on alert with the air defense and aviation units of this country's armed forces within the framework of the CIS Common Air Defense System. In 2011-2012. A number of contacts were implemented for the supply of spare parts for air defense equipment to Armenia. Modern air defense and missile defense systems are deployed, in particular, in the Syunik region, in the Goris area.

In June 2014, the official report of the Russian Federation to the United Nations Register of Conventional Arms for 2013 was published, containing indicators of the export of the main types of weapons and military equipment (IWT). According to the document, in particular, 2013 were delivered to Armenia from Russia in 35. tanks (most likely, T-72BM), as well as 110 armored combat vehicles (most likely BMP-2, but, possibly, BTR-80 or GAZ-2975 Tiger armored vehicles). In addition, 50 launchers and 200 missiles were delivered to Armenia, most likely, these are modern 9K135 Kornet-EM anti-tank missile systems (ATGMs). We also mention the statement of the Minister of Defense of Armenia Seyran Ohanyan that "... we cannot tell the public about all aspects of the military and military-technical cooperation of Armenia and the Russian Federation."

In recent months, the intensity of training activities at the 102 Russian military base stationed in Armenia has increased significantly, and the infrastructure of the military facility itself is being modernized. Thus, during the July integrated exercises involving 70 percent of the personnel of the Russian military base of the Southern Military District (South-East Military District) in the Republic of Armenia at the Kamkhud and Alagyaz testing grounds, special exercises were conducted with the calculations of the mine detection service (MRS). A wide range of modern military equipment, including drones, was used in practicing the tasks of searching for and neutralizing explosive devices and improvised explosive devices. The press service of the Southern Military District notes that in Armenia, the Russian military use drones for reconnaissance, tactical exercises and multi-kilometer marches. The aircraft are operated by contract soldiers who have been trained in special centers. Snipers of the Russian base in Armenia are mastering the technique of shooting, and the communications workers are using the latest communications technology ...

Back in Soviet times, Armenia was a technological leader in the Transcaucasus, after the decline of the first post-Soviet years, the previously existing production ties with Russian enterprises were partially restored in relation to the new conditions. Currently, the constraints of bilateral military-technical cooperation are not only objective (lack of a common border), but also subjective. We are talking, in particular, about the illegal sanctions imposed by Washington and Brussels against a number of defense companies in Russia. However, according to the statement of the Minister of Defense of Armenia, “the Armenian-Russian military-technical cooperation is at a high level, and the sanctions will not be able to have any negative impact on this.” The head of the defense department recalled that within the framework of bilateral cooperation, Armenia and Russia had already established a number of joint ventures in the military-industrial complex.

Back in October, 2013 was created by the successfully operating KAMAZ-Armenia enterprise. The next step is the creation of a joint venture with the Ulyanovsk Automobile Plant, and with the Russian Helicopters, which began to deal, respectively, with the assembly, repair and maintenance of Russian-made UAZ vehicles and MI helicopters. On turn - other objects. “The development goal is to enable us to extensively equip the Armed Forces with modern weapons and military equipment, and through (establish) direct communication with various organizations of Russia, give our organizations the opportunity to implement relevant measures and thereby develop our own military industry,” Seyran stressed Ohanyan.

Earlier, the former secretary of the National Security Service of Armenia, Artur Baghdasaryan, stated that it is necessary to create a State Defense Industry Committee under the government of the country, since the military-industrial complex must be coordinated by a separate structure.

Next to the city of Sevan, the Russian-Armenian infrastructure of state reserves “Armrosgosreserv” will be created. The reserves of the Russian state reserve will be stored in the Caucasian Territorial Center, including reserves of various categories - from equipment to food. Armenia will participate in the operation and management of the center, and the stock will be replenished at the expense of the enterprises of the republic. When the shelf life of products will end, they will be sold in Armenia at low prices.

In the village of Balahovit, near Yerevan, a humanitarian center of the Ministry of Emergency Situations is being created, in which the Russian and Armenian sides intend to invest up to 60 million dollars. In the case of natural disasters, the center will provide timely assistance to the population of the region. The possibility of creating a joint venture "ArmRoskosmos" on the basis of the Byurakan Observatory (for which several new telescopes were acquired) is being considered.

The authors of a number of publications in the Armenian media rightly point to the fact that the recent complete refusal of Kiev from military-technical cooperation with Moscow creates a more favorable situation for the South Caucasian country in the markets accessible to Armenian goods. In the context of the import substitution that has become even more relevant for Russia, three dozen Armenian enterprises of the military-industrial complex should use the opportunities that have opened up in order to offer their services to the Russian defense industry in a timely manner. A number of enterprises in Armenia are in one way or another connected with the Russian military industrial complex, and some are completely Russian property. First of all, we are talking about the Alliance free economic zone located at the Mars plant operated by Sitronics and the Yerevan Research Institute of Mathematical Machines. This special economic zone has an industrial high-tech focus and is able, under certain circumstances, to offer the Russian side its services in the field of precision (precise) engineering, which is especially important due to Russia's loss of capabilities of similar Ukrainian production.

In case of successful development of military-industrial cooperation, Armenian enterprises could produce components not only of the weapons systems supplied to Armenia, but also of the types of weapons produced in Russia for the Russian army or for export to third countries, experts say. This in turn will make it possible to earn money for the purchase of additional modern weapons in order to ensure the defense of the Republic of Armenia. Thus, an interconnected and sustainable process may occur, in which strengthening defense capabilities will contribute to economic growth, while expanding the production of arms components will stimulate the flow of funds for the growth of military purchases.

Attempts by the West to actualize regional conflicts in the post-Soviet space, overt interference in the internal affairs of independent states create additional challenges and threats for Russia and its allies. The instability of modern international relations, the constant occurrence of explosive situations once again confirm that there is no alternative to strengthening Russian-Armenian military-political and military-technical cooperation.