Happy Independence Day: Russia in the mirror of Ukraine 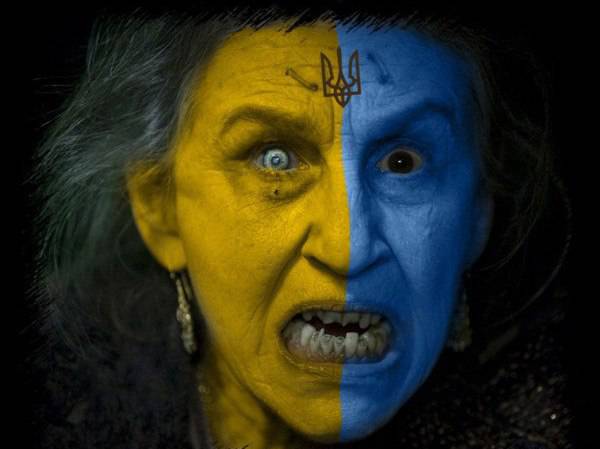 24 August, the remnants of the Republic of Ukraine, decomposed into neo-feudal oligarchic domains - the parliamentary republic of Euromaidan and the authoritarian Dnepropetrovsk Kaganate - traditionally celebrate Independence Day.

This fetish holiday is on a par with the same meaningless red calendar days in any fragment of post-union Eurasia. Each republic exchanged federal sovereignty for national “independence”. After that, each new entity went on its way to exchange the remnants of sovereignty for independence. Someone, like Moldova, Georgia and Tajikistan, immediately plunged into a civil war. Someone came out of the darkness of national development in 1994, like Belarus, someone in 1999, like Russia.

Each of the national paths was different from each other, but they were all the same according to the method - integration into the global project on the rights of the periphery.

But since citizens constantly buzzed and threatened to arrange a “red revenge” in the next elections within the framework of electoral democracy, they had to fetishize “independence”.

The Ukrainian case of “independence” is not unique in the method of integration into a global project and in bringing the state to collapse. But it is indicative - when even complete bourgeois understand that civil war is not somewhere far in mountain Badakhshan, but here and now. And the oligarchy is not polished, smiling people from the gossip, but specific ghouls, ready to drown the cauldron of civil war with your neighbors and with you.

Ukrainian “independence” is a way of reflection for an ordinary citizen who did not want to be interested in politics, being absorbed by the joy of consumption and credit. And to which reflection came in the form of Ukraine.

Therefore, it is necessary to draw the right conclusions from the Ukrainian “independence” - for the Ukrainian collapse can happen even in Russia, even in Belarus, or in Kazakhstan. Because in reality the case is not "Bandera", "pravosekah" Poroshenko, Kolomoisky and Yanukovych. At stake is the question of genuine sovereignty, which Russia and allies must gain. Accordingly, the issue in the socio-economic model of society and the state - a model that is able to provide such sovereignty. Because if this is not done, the crisis according to the Ukrainian scenario will sooner or later be launched in Russia. Because between the socio-economic models of Ukraine and Russia are much more common than different.

Therefore, it makes sense to deal with the fact that, in fact, lies behind the fetishized “independence”.

All история “Square” Ukraine is the path laid down in the allied policy of Mikhail Gorbachev: the desire to get into the “civilized” world.

In ideology and rhetoric, this meant that "we will live in Europe and the USA." And in the economy, this meant that we are joining the global game in the world market. Where we define our place, for which the ruling elite receives its financial rent and becomes a handshake.

In Russia, this model was aptly named "oil in exchange for pleasure." In Ukraine, oil can be replaced by "coal and metal." But this does not change the essence - the economy, as it was peripheral to the emission center, remains so.

Attempting to protect your market within the framework of the Customs Union is the right, but really insignificant, step towards true sovereignty.

The next step - the Eurasian Economic Union - also does not solve the problem of full economic sovereignty. Because today, Eurasian integration still follows the rules and principles of world trade - that is, ultimately, it still plays in favor of the global market, where Russia is a peripheral economy.

Privatization as a true goal

The second characteristic of “independence” is the absence of sovereign economic policy as a way of designing and managing the future.

But, despite stormy discussions, such a political model still leads to squeezing the state out of economic and, as a result, from political life.

Therefore, the whole essence of “independence” is privatization as the only political and economic process.

The alienation of state ownership of the production of the means of production is the goal and means of any policy of “independence”. The rhetoric and pretexts can change from election to election - then we need an “effective owner”, then we need to “not allow a red back”, then we “look for additional sources of investment” - but the essence does not change.

The Ukrainian case is a vivid example of where total privatization and dismantling of the state lead. There are even more vivid examples - say, Georgia, but due to the small size of the state, the processes went unnoticed, and the disaster was attributed to the psychopathy and corruption of Saakashvili.

The third pillar of any “independence” is the reformatting of national capitals into regional branches of the emission center. The peripheral model of the economy requires a special type of national capital - which is more like a bank branch than a city. And it is very little like the capital.

The “capital” capital should, first of all, provide legal support for the financial flows “periphery - global market - emission center” and be a place of comfortable living for national officials and the oligarchy.

Therefore, by and large, there is no special functional difference between national capitals - just the Moscow branch is much larger than the Kiev branch and hundreds of times larger than the Chisinau and Bishkek branches.

As long as our economy is a peripheral economy and we cannot ensure financial sovereignty, our capitals will not fulfill the development objectives. Because a person is weak and the temptation for an official to parasitize on financial flows will always be above the fear of punishment. Moreover, the severity of Russian laws is compensated for by their selective use - as we can see from the example of the former defense minister and the Moscow mayor.

“Square” capital of the parasitic type is not just a brake on the development of the whole country. The capital always performs the function of an example to follow. And if in Moscow 30-years Stalin's skyscrapers were built and the metro was launched in record time, similar processes were observed throughout the country from Uzhgorod to Vladivostok.

And if in Moscow the central processes are spot building in the historic center, the annual shifting of asphalt and curb in the same place, the reproduction of pathos restaurants and boutiques, the construction of shopping centers, paid parking and the work of illegal immigrants - then similar processes will take place in other cities.

Actually, all the ugliness of the development of our cities on the peripheral model is clearly visible in subsidized regional centers - the routes of intra-district electric trains are closed, and dozens of taxi services appear in return.

The degradation of the capital as a bank branch and a vip-consumption center is the most important process of “independence”, which sooner or later leads to Maidan, tahrir and marsh.

From elite to elitist

Accordingly, the peripheral socio-economic model leads to the fact that the state loses not only property and sovereignty. Gradually, a stratum of traitorous-minded elites is being formed - a class of national elitist.

This type of people appears during the merging of business and public administration. Corruption in the context of a peripheral socio-economic model becomes the only incentive.

It is useless to fight corruption within the country in which elitist people raise their children abroad. And they do it because they bring profits there. And they cannot withdraw profit from the periphery - because the economic model is as follows. Why keep money at the branch if you can do it at the head office?

Therefore, the problem of elite degradation in the elitist is unsolvable in the framework of the current economic model. An elitist is a type of post-union person who regards his tenure as a compulsory duty on the way to real life. Life, which is located in warm latitudes, where everyone goes in white pants. In the peripheral model, Russia is a kind of “watch” in the far North - which must be defended.

In the Ukrainian example, you can see that the elitist will sooner or later crush the state. After that, an open oligarchy is approved.

Peripheral model of the economy will always strive for political design in the oligarchy. And the oligarchy will naturally lead to a rollback to the new Middle Ages - because private individuals, privatizing the state in parts, will strive to pass their part of power and property on. And since there are many such individuals in the oligarchy, sooner or later the country will fall into neo-feudal plots. What we, in fact, can see on the example of the Ukrainian crisis.

... 24 August owners of the remnants of Ukraine frantically celebrate Independence Day - paint fences and bridges in yellow and blue, looking for traitors everywhere, fighting in a patriotic hysteria and trying to present a civil war to the homeland. The future that these people have predetermined to unfortunate Ukrainian citizens is extremely bleak. Therefore, they need war, so that citizens feel happy, if only because they do not kill them. For the same reasons, the need to fetish "independence" - so that a citizen does not even think to think about the essence of sovereignty. And he didn’t ask the only right question: “Where is the state, and who are all these people?”