August 26 2014
27
Recently received a sequel история with charges of violating the terms of the international treaty. As follows from the latter News, over the next few weeks, representatives of Moscow and Washington will discuss the current situation and its controversial parties. Perhaps future consultations with the participation of diplomats and specialists will help reduce tension in Russian-American relations. 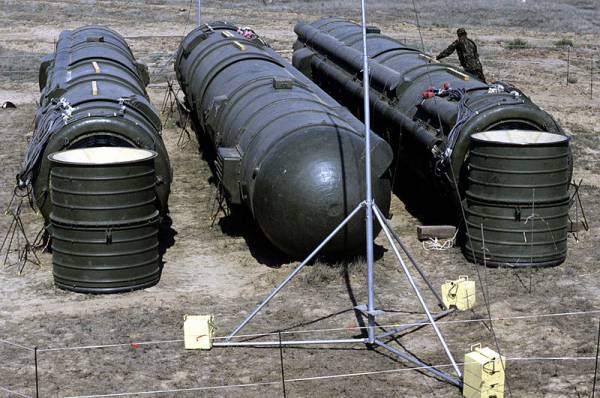 We are talking about the consequences of the recent US Department of State report on compliance with arms control agreements. The authors of this document claimed that Russia recently violates the terms of the treaty on the elimination of medium and short range missiles (INF), according to which Moscow and Washington have pledged not to develop, produce or exploit ballistic missiles with a range from 500 to 5500 km. At the same time, the authors of the report confined themselves to the most general formulations and did not provide a single fact confirming the allegations of breach of contract. Such allegations, which appeared in the official document, led to the appearance of relevant questions. However, so far no evidence confirming Russia's violation of the INF Treaty has been published.

Last week, US State Department spokeswoman Marie Harf said that the Russian leadership had been sent a proposal to hold talks, the subject of which would be compliance with the provisions of the INF Treaty. For obvious reasons, at the time this information was announced, the date and place of the consultation was not known. A little later, some of the details of the upcoming event revealed the source of the "Rossiyskaya Gazeta" in the Russian Ministry of Foreign Affairs. According to him, the negotiations will be held in September.

Consultations on mutual concerns, as the unnamed source of Rossiyskaya Gazeta called them, will be held at a solid level. At the same time, the composition of specialists who will have to defend the Russian position is still unknown. Probably, representatives of the foreign policy and military departments will sit at the negotiating table from the Russian side. Future negotiations should clarify the position of both countries and also clarify the current situation with baseless accusations.

An interesting fact is that within a few weeks after the publication of the “scandalous” State Department report, only expert comments appeared. The disputes at the highest level were limited to a few statements in which Russian officials and the military rejected all the accusations and declared that all the conditions of the treaty on medium-range and short-range missiles were met. However, soon official Washington sent a proposal for negotiations to Moscow. The reasons for the emergence of such an unexpected initiative are not completely clear, but there are grounds for some assumptions.

It is quite possible that the appearance of the American proposal for negotiations contributed to some moments of the speech of Russian President Vladimir Putin in the Crimea. He recalled cases where the United States unilaterally withdrew from international treaties, which, in their opinion, did not allow for the security of the country. In this regard, Russia can also withdraw from some contracts unilaterally, if they interfere with its security.

V. Putin did not specify which particular international agreements Russia could get out, however, judging by the recent actions by the US leadership, his statement attracted attention. The result of this could be the proposal to hold consultations on the INF Treaty. Probably, the American leadership will attempt to dissuade official Moscow from withdrawing from the treaty, since such a move could have serious implications for the security of both countries, as well as a number of other states.

It should be noted that the agreement on the elimination of medium-range and short-range missiles is indefinite, but it provides for the possibility of one party’s exit. If the exceptional circumstances related to the content of the contract threaten the highest interests of the country, then it has the right to refuse to further their performance and withdraw from the contract. It takes half a year before leaving the contract to notify the other party and indicate the reasons for such a decision.

Thus, both Russia and the United States can withdraw from the INF Treaty, but for two and a half decades of the existence of the agreement, neither side has exercised such a right. The reasons for this should be considered the experience of the Cold War, when the USSR and the USA kept on duty a large number of medium- and short-range missiles, which took no more than a few minutes to approach the target. Like weapon posed a great danger to both sides, as well as to several European states. In order to eliminate such risks, an INF Treaty was signed.

The fact that in recent years there have been repeated accusations of violating the terms of the agreement can speak about the importance of the treaty for both parties. For example, several years ago, Washington accused the Russian defense industry of creating and testing a RS-26 Rubezh ballistic missile and a cruise missile for the Iskander complex, which, according to their characteristics, are subject to the INF Treaty. In response, Russia drew attention to the target missiles used during the test of missile defense systems. According to Russian experts, these products have characteristics that allow them to be classified as a class of INF. Certain claims are also made to anti-missile systems that are planned to be deployed in Eastern Europe.

As we see, the existing treaty on the liquidation of the INF Treaty has a number of unpleasant consequences of a diplomatic nature. Its existence leads to mutual accusations, and the rejection of the treaty may adversely affect the military-political situation in Europe. Thus, the parties to the contract should find a common language and try to get rid of existing problems. For this purpose, negotiations will be held in the near future.