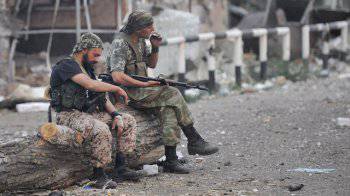 Like many in Russia, I keep a close eye on the tragedy of Donbass and Novorossiya, alternating anxiety with hope, pain and admiration. There is a sarcastic jest: everyone thinks he is a strategist, seeing the fight from the side. I once honestly pulled my soldier's strap still in the Soviet Army, the meaning of the foregoing is quite close and understandable. Therefore, I ask in advance the honest plowmen of the war, the militia heroes to treat my arguments condescendingly if they find themselves divorced from reality.

And I want to say the following. The morale and successes of the Donbass resistance are undoubted, like the mess, stupidity, cowardice and thievingness of the persecuting Ukraine. But what worries me is that, in spite of everything, such Ukraine still turned out to be able to do in the Donbas what is happening now. And hysterical anti-Moscow races are still going on, other regions of Novorossia are still “quietly” without trying to open a “second front”.

I explain this to myself by the fact that the leadership of the DPR and the LPR have not yet reached out to the organization of a strategically full-fledged propaganda support for their struggle. And as it shows история, in civil wars, agitation and propaganda are sometimes more effective than any weapons. If in the minds of the enemy soldiers it is possible to devalue ideas and sacrifices in the name of these ideas, then they not only stop fighting for them, but sometimes they are made the most vehement opponents of those who once seduced them with such ideas.

Let's see the ideas of ukrovoyak: Ukraine is tse Europe, Muscovites are quilted jackets, Colorado, subhumans, Russia has taken away the Crimea, wants to take away all the lands that will succeed, and climbed into the Donbass, the West will help us, the heroes of Ukraine are Bandera and Shukhevych. Not much, but for now - it works! Bandera go to the volunteer battalions, which commit atrocities over peaceful people, but also keep their battles more steadfastly than ordinary soldiers.

The mobilization of the army at the very least, but go, the recruits are supplied even by potential Novorossia, that is, Kharkiv, Odessa, etc. The soldiers' mothers of Ukraine howl, but require only that the soldiers be provided, replaced in time, properly trained and commanded. The war itself is almost never questioned. The collection of donations among the population in favor of the army is quite successful. In Donbas, the population is 7 million. In the whole of Ukraine, 40 million. If the rear of the Kiev junta continues in its current volume, there is a risk that the Donbass will be crushed by a simple numerical bulk, they don’t feel sorry for people, and there is no fear either, you can always slip away to the West, if that ...

Well, and with what it is possible to effectively influence all Ukraine so that it doesn’t need the war in the Donbass so much that it fits the Maidan?
Of course, first of all, the military successes of the militia, everything is meaningless without them. But then surely there should be a competent propaganda and agitation, in which there would be no weak points. What can it be built on? Personally, I see it like this. The main idea, which the Kiev junta and the West behind it are now raising on the shield, is the defense of the country's territorial integrity. Russia has taken away the Crimea and is fanning separatism to take the rest. It violated OSCE principles and order in Europe. And do not give a damn to everyone that the West had done the same thing with impunity before in Yugoslavia and many other places. However, one should not underestimate the state-patriotic and even partly imperial feelings of the people of Ukraine. They are not weaker than the Russians, because we all came "out of the overcoat" of the Soviet Union. It is on these feelings that the efforts of the militia information troops should be directed. I still do not take into account the nonsense of “tseevropniki” and Bandera, because they are the lot of the zombie minority, yes, wildly active and dangerous, but the minority, which is always foam over the national flow. But for those who are enthusiastically or sluggishly going to the front, and also helping the front to “save the Batkivshchyna”, one can say the following.

Well, let's say you, having laid down your fighters nemerno and impoverished to tears, will achieve victory. And what do you get? Ukraine, which will be hosted by thieves' clans of oligarchs and bureaucrats under the protection of purchased Bandera gangs? The West will give loans at wild interest and under "beast reform", and thieves' clans shove them into their pockets. Maybe you’ll go to the new Maidan? So now they will become of no interest to anyone, oligarchs will give money for them, ambassadors with cookies will not come, they will simply crush you tanks.

But this is not important. You are still fighting for nothing. Remember. In the Donbas and in other places of Novorossia, people only wanted to be allowed to think and speak their own language, to reckon with their opinion on joining Europe. No one to Ukraine did not encroach. When the people were denied their easy demands, they began to seek only federalization, and then crowds of local and alien pogroms-Nazis were sent to them. That forced to take up arms. But, by and large, no one encroaches on Ukraine even now. The best thing would have been if other Ukraine could have been achieved, when the Federation of Ukraine and Novorossia appeared in place of the current "dill", in which the rights of all language groups of the population would be respected. There are already four state languages ​​in Switzerland, and what a magnificent country ... And even in this Federation, the whole Banderogitler nasty type of German post-war denazification would have been cleaned. As part of this denazification, it would be possible to punish the court and the confiscation of all the oligarch-plunderers, that they jumped out of the 90's and are now feeding Bandera battalions. And build a new state, taking into account the tragic mistakes of the recent past.

As a response to this program, of course, Crimea may emerge. Trump is serious, but he has a great answer! Yes, the Crimea will remain Russian, but the new Federation of Ukraine and Novorossia can receive special privileges in it, moreover, it certainly will not just enter, but Transnistria will happily break in, and that's compensation for the Crimea. And if you, our ukroprotivnikami, this alignment does not fit, then willy-nilly, you have to win back the Donbass from you, and maybe the whole of Novorossia. And leave with the conquered in Russia, to be saved from you and the West. And you live as you wish, if you can ... But how great it would be to jointly turn our weapons against all these insects that saddled Ukraine: corrupt Tupara officials, thieves-oligarchs, against the psychoanaline bandogeritlerism ...

That's about how I see the possibility of propaganda for the militias of New Russia. This is a general scheme, the details can be worked out according to the situation. But if everything I wrote is unrealistic, well ... I do not insist.