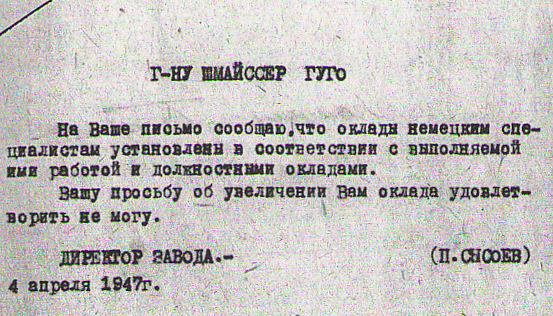 “The city’s population treated prisoners differently. Some of them felt sorry for them and even fed them; others, having lost loved ones in a war, hated them. There were cases of beatings of the Germans. ” © Sergey Selivanovsky, "Germans in Izhevsk".

The final article on Schmeisser was actually ready on August 17, only the work on the ending remained. But in the process of working on it, I became interested in the personality of Dr. Werner Grüner - as a complete and positive antithesis of the personality of Hugo Schmeisser. In the morning of 18, I went to the museum stories Izhmash. The director of the museum, Aleksey Alekseevich Azovskiy, provided me with materials on the history of the motor-plant, which produced an experimental batch of Kalashnikov assault rifles. They had to shoot them, in addition, there were questions about the personality and life story of Werner Grüner and his children. I would like to receive information on them from Galina Arkadyevna Kovalyukh - a leading engineer on scientific and technical information. She showed me a book about Gruner and, while I was looking at it, I took a folder out of the closet. “There are materials on Gruner here,” she said and handed me a folder. When I looked at the documents that lay in it, I realized how Schliemann felt when I unearthed my Troy. There were copies of documents related to the work of German specialists at the Izhevsk Machine-Building Plant! I realized that all my final article can be replaced by publications of only one document from this folder. But do not disappear the same good. I decided to leave the article as it was written, with a small addition at the end.

So, here is the article.

I wrote an appeal to the Kalashnikov concern with a request to give an opportunity to search the archives for documents relating to the post-war stay of German engineers at the Izhmash plant. In response, the concern announced that it was refusing to keep factory archives at all, and the state archive of Udmurtia announced that it had no place to store this archive.

In the story of the debunking of the myth of the gloomy Teutonic genius, who secretly invented the famous weapon in Izhevsk dungeons, not enough fat points. Indeed, there is no convincing information about what the German gunsmiths at Izhmash did. The only well-known document of that era — a characteristic of Hugo Schmeisser, signed by the deputy director of personnel, Mukhamedov, was declared a fake by the forces of evil. It turned out to be impossible to get access to the Izhmash archives, well, and to find machine drawings with the signatures of Schmeisser or Grüner there - all the more.

But the stuff does not sink, but the truth emerges. True, not always where you expect it.

A Canadian researcher with a Scandinavian surname Folke Myrvang (Folke Myrvang) has released a two-volume book “German universal machineguns”, dedicated to the German machine guns from MG08 to М3. Let's pay tribute to Myrvangu - just a huge amount of photos, enough textual information. The excavations are deep enough, for example, information on the Czech light machine gun under the intermediate cartridge «Rapid» 8 mm.

Well, since the German machine guns, then, of course, MG-42 - the best machine gun of the XX century. If MG-42, then its author is Werner Gruner. If Gruner, then Izhevsk, and therefore, Schmeisser. And a stack of drawings!

Ordinary citizen of the Russian Federation, the archives of documents of his native country are not available. At best, your request will not be answered. At worst, they will declare the elimination of archives. But documents of historical value, you can find in the vast network or in the books of Western researchers. All of them are published anonymously, without specifying where and how the author got access to the original and where the original is now. This is understandable, otherwise this anonym would have problems, if not with a criminal code, then with an administrative code, well, or just flew out of work.

Let's go back to the subject. In addition to the drawings in Myurvang’s book, documents from the personnel department of Izhmash have surfaced in the network. Most likely they were made from the book by Norbert Moczarski “Hugo Schmeisser: zwischen Tabu und Legende”, and they were brought to the Mosharsky not without the help of the famous journalist Ilya Shaidurov. Anyway, let's look at these documents.

The first document is “General Characteristics of Foreign Specialists at the Department of the Chief Designer of the Plant No. XXUMX”. 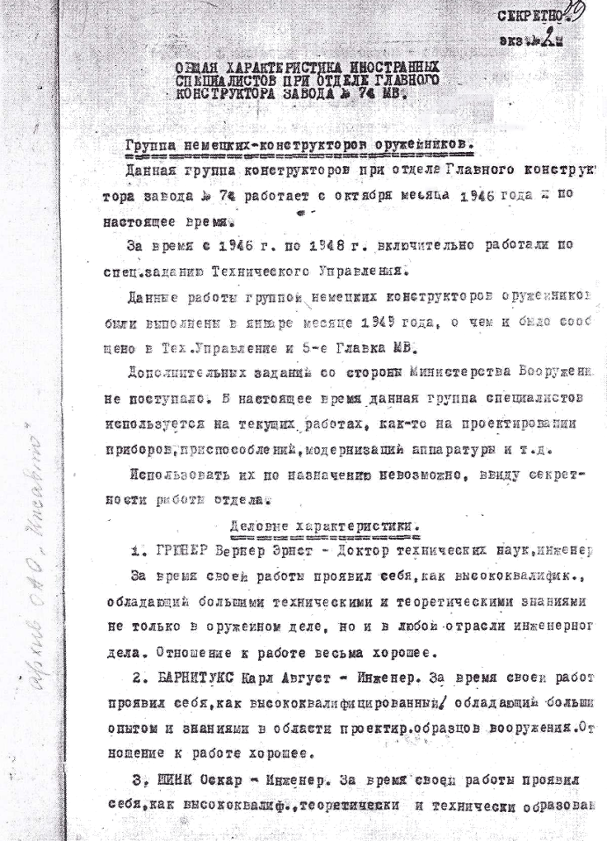 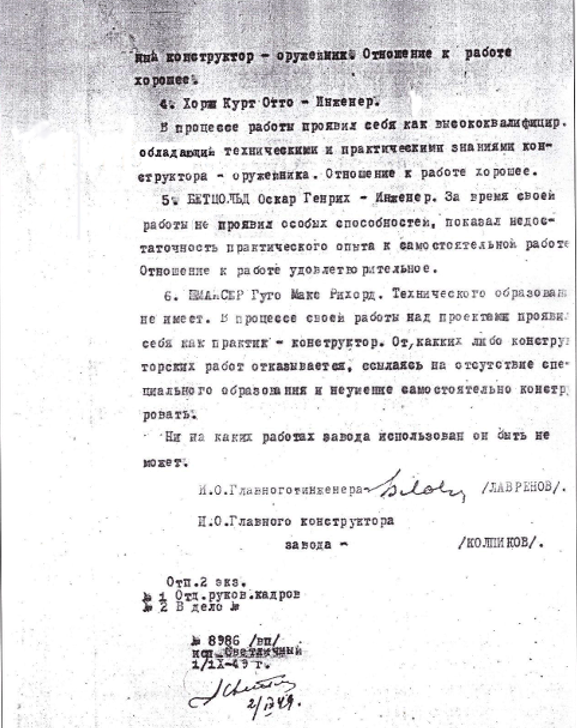 So, the Germans worked on the instructions of the Technical Directorate of the Ministry of Weapons from 1946 to 1948. The assignments were carried out in January 1949, and according to the results of the work there was a message to higher authorities. It would be interesting to see both the task itself and the report itself. Maybe children or grandchildren will not see them in foreign sources, but will find original documents. In the meantime, since January 1949, “a group of specialists is used in ongoing work, such as: designing devices, devices, equipment upgrades, etc.” and, if the characteristics of most Germans are “highly qualified.” ”, Then with respect to Hugo Schmeisser it is said directly -“ he refuses design work ”. Of course, as I already wrote, Schmeisser didn’t have any “devices” or “equipment upgrades”, except for weapons, out of his head, unlike Volmer. Even on an empty stomach.

Now Schmeisser's letter of March 1947 of the year, when the plant’s management for the refusal of design work established the corresponding salary. 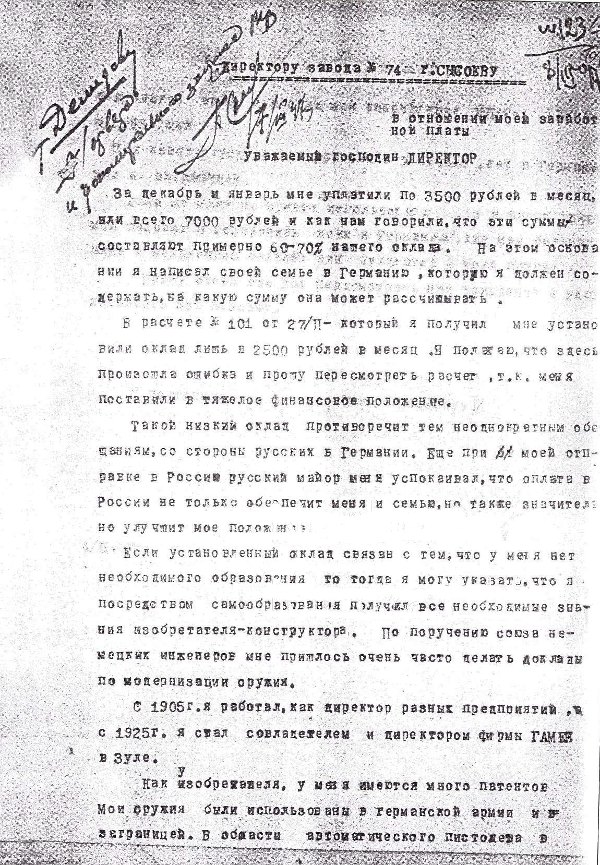 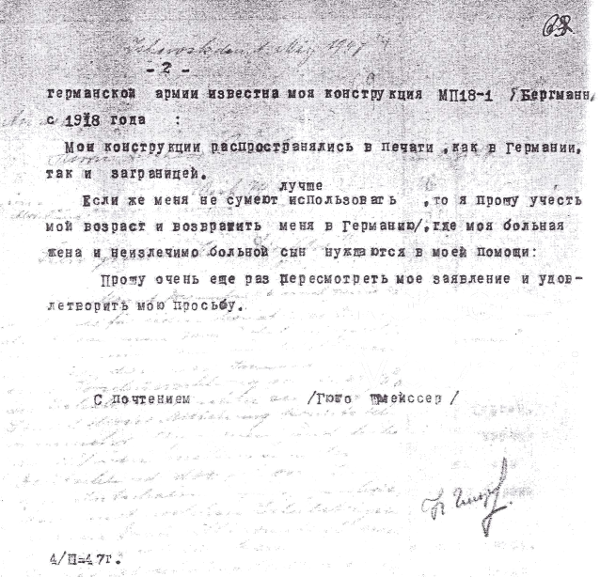 We are interested in one moment. This one: “As an inventor, I have many patents. ... In the field of automatic pistols in the German army, my design MP-18-1 / Bergmann / s 1918 of the year is known. ” Hugo! But what about Stg-44 or, at worst, Mkb-42 (H) ?! Not a word. I found only one Schmeisser patent related to the sturgevever. This is the patent for the ejector in the Stg-44 shutter. Perhaps, not all patents are still digitized and laid out? But, you see, in such a letter - and not to mention the merits of the “founder”, “predestinator” and “forerunner” of the era of assault weapons under the intermediate cartridge, it is more than strange!

After reviewing the drawings in the book by Murvang, it becomes clear what the task of the technical management of the Ministry of Armaments was. The Germans developed the entire line of small arms - from submachine guns to machine guns. I'll give Kurt Horn a job. His machine gun is well known to the readers of the magazine “Kalashnikov” (No. XXUMX / 9) in the article by Yuri Ponomarev “The Automatic Horn”. 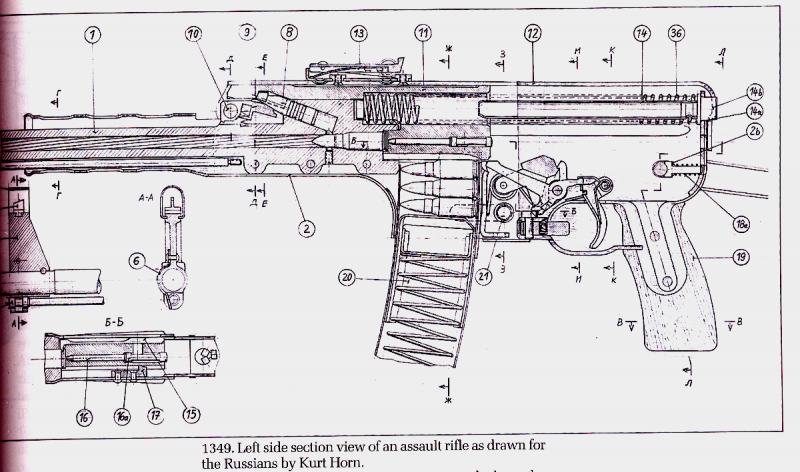 Most likely, it didn’t come to realization of this automaton in the metal. Yuri Ponomarev writes about successful trials of captured weapons. But the Kalashnikov assault rifle has already been adopted, and the work of Horn is now only of academic interest.

According to the report, after the development of the weapon line, the Germans switched to smaller works. For example, such: 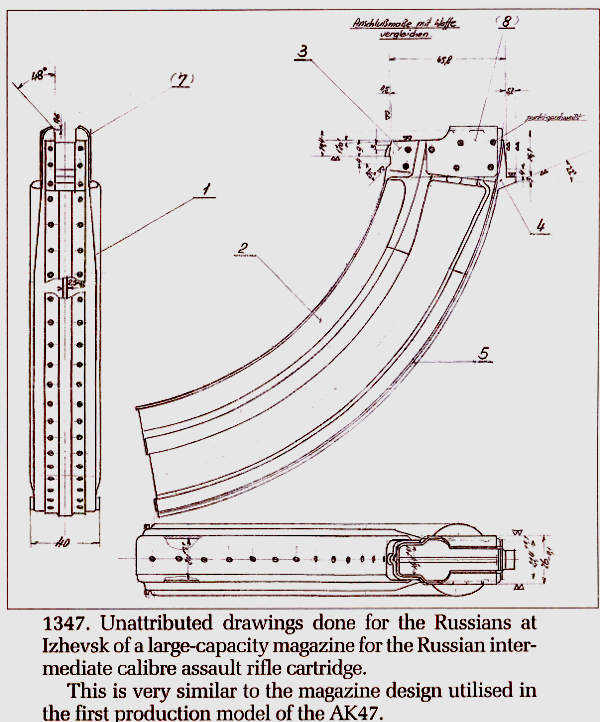 Do not fidget in the chair. Better pay attention to the width of the store. This is just another attempt to apply the four-row arrangement of cartridges in the store. According to Dieter Handrich, this was attempted to be realized even in 1944, at the company of Hanel. Schmeisser was no longer a technical director and was not engaged in the design. He was a simple "director of the company Hänel". On the scan there is a magazine cover without a feed mechanism and, most importantly, without a mechanism for rebuilding a four-row feed into a two-row outlet. Schmeisser in his shop, rearranging the cartridges from two rows into one, hit the wacky position. What to say about the rebuilding of the four rows in two. Patents of the sea, as always, introductions zero. Therefore, when the concern announced the creation of an 60-charging store, this could only be regarded as the super genius of its engineers or the complete arrogance of one who throws such claims. 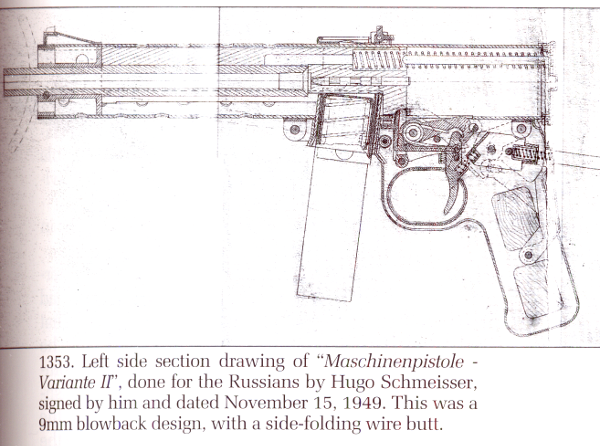 This is a submachine gun variant "zvi." Apparently, there was another option "ince". Combine this with the letter of Schmeisser, in which he does not mention his merits in creating a sturmgever, but emphasizes his authorship in MP-18 / Bergmann /. Compare the level of execution of the sketch Schmeisser with a sketch of Horn.

Well that's all. There remained the lyrics in relation to Mosharsky, Shaidurov, Myurvang and a mysterious countryman with a non-Russian surname - Simonenko, who handed over to Myrvang scans from the drawings of the Germans. Where are these drawings now? Why is the main argument, knocking out the last support of slanderers and liars who are trying to defame the pride and glory of Russian weapons, has not yet been presented in the same Kalashnikov museum? Why is there no access to the materials that tighten the hinges on the throats of the detractors of the history of the Fatherland, such as Ruchko? Why does Murwang, Mosharsky and many others, having such obvious evidence, continue to draw bagpipes about some mythical German participation in creating the best weapons of the 20th century?

The end of the article.

So, 18 August 2014. Here is a copy of that document from the folder that Galina Arkadyevna unfolded in front of me. 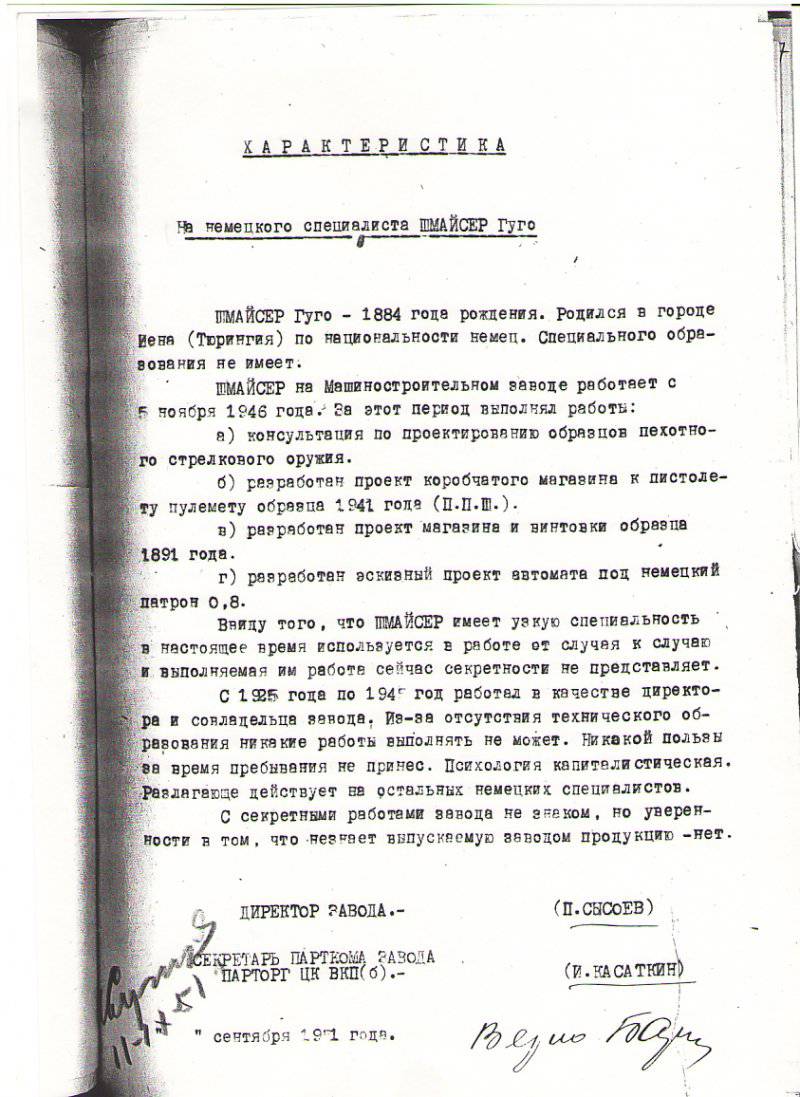 What can be said about this document? Schmeisser did not disappoint when he said that he "gave the Russians some advice." As you can see, the plant director and party organizer confirm these words. The “c” clause is an obvious mistake. It is necessary to read: “the design of the shop for the 1891 rifle was developed.” Well, the point "g" - a draft design of a submachine gun, which we have already seen at Myurvanga. 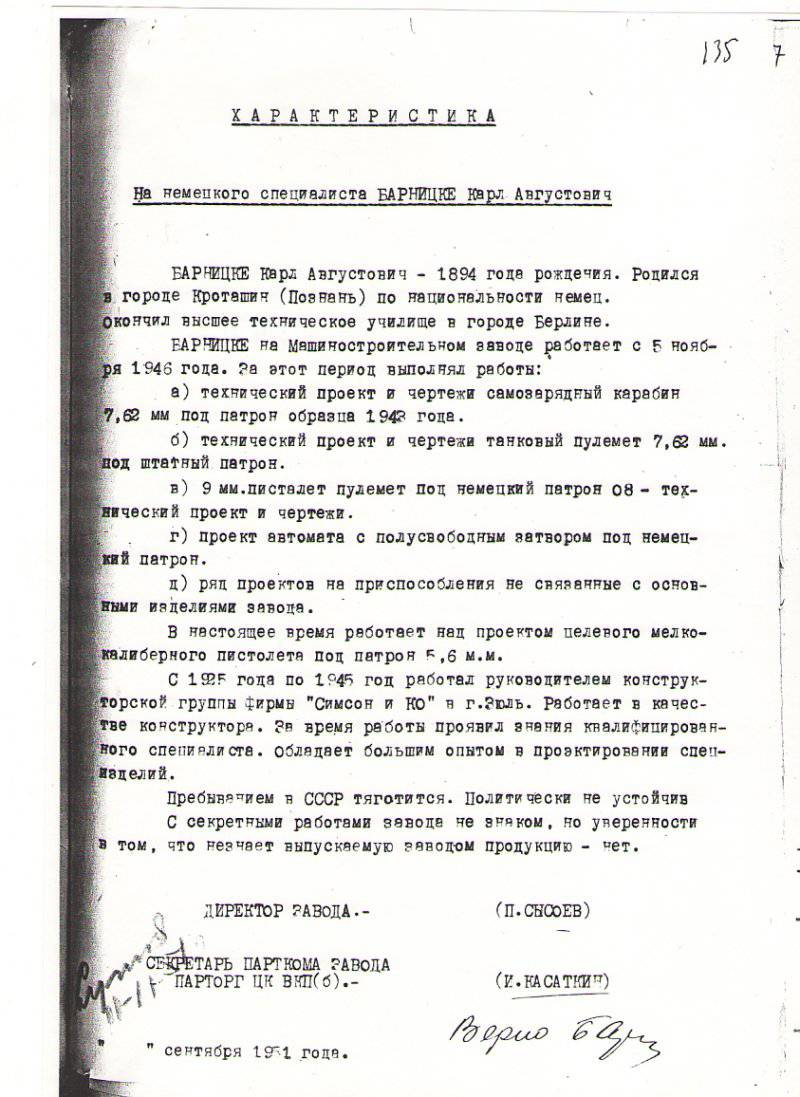 Impressive? So the draft machine gun option "Eins" was found.

Perhaps that's all. Children and grandchildren do not have to dig up artifacts, proving that the German designers had nothing to do with the best weapons of the twentieth century. So much the better. Find yourself a more interesting topic.