LIH is already in the US?

August 23 2014
154
The United States has embraced a real shock. It was first of all experienced by those people who believed that the threats from the ISIL militants operating in the territory of Iraq and Syria were something ephemeral, very distant and impracticable. However, the Islamic state has shown that its supporters are in the United States. 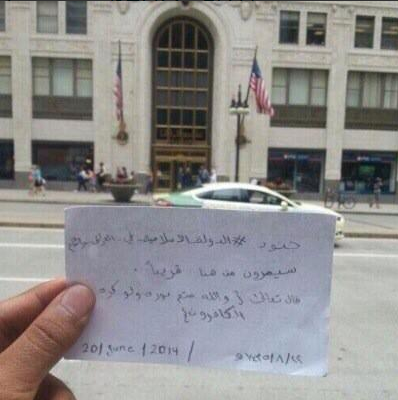 A picture appeared on Twitter in which a small “poster” was displayed with an inscription in Arabic “We are already in your country, we are already in your city, we are on your streets. You are our goal everywhere ”, which (the“ poster ”) was shown against the backdrop of one of the Chicago buildings (the Old Republic Building). He writes about it RT.

Some American media rushed to reassure ordinary Americans by claiming that tweeting was the work of a “prankster” who decided to simply frighten gullible people. However, after the execution of the American journalist James Foley by a British citizen in the ISIS terrorist organization, and after ISIL threats of new reprisals against American citizens, Americans are not inclined to consider publishing a photo in the microblog as a failed black humor rally.
Ctrl Enter
Noticed oshЫbku Highlight text and press. Ctrl + Enter
Military Reviewin Yandex News
Military Reviewin Yandex Zen
154 comments
Ad