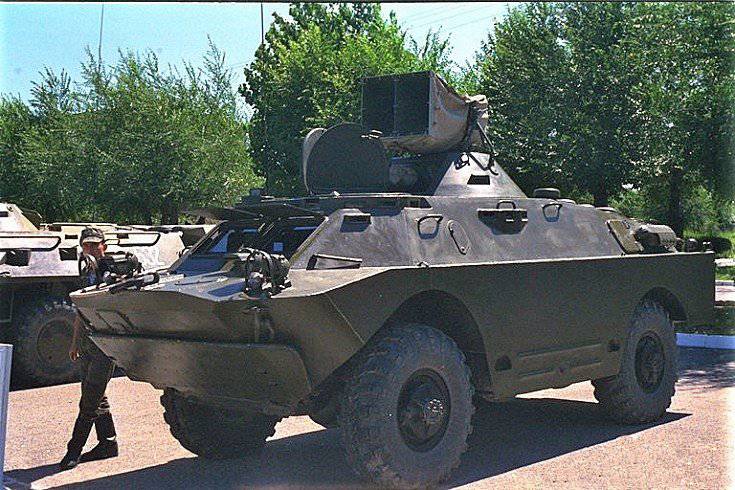 Renounce not to write on this topic, I repent. But "smiled" the information of the head of the national TV company of Ukraine Zurab Alasania about the implementation of psychological attacks on the Ukrainian military. Link: http://rusvesna.su/news/1408565415.

On photo ЗС-82 based on BRDM-2. On the roof she has a powerful speaker system. The ES is a sound station. Characteristics of the machine: the range of the ES is 6 km, power - 1000 W, and the operator reading the text has the opportunity to be at a distance of up to 500 m from the armored vehicle. At present, ten agitation sound broadcasting stations have been transferred to the areas bordering Ukraine.

For special services and just fans of the genre - important information. It has been repeatedly said that the 25 frame is rather a myth, harmless entertainment. Why? In order to at least temporarily take control of a person from the outside (it sounds crazy, but even so), to make a bookmark in his subconscious - you need to narrow the range of his perception. Psychotherapist hypnotists usually ask recipients to concentrate on something in such cases. Since, according to the common point of view, we get 80% percent of information visually, it’s not very easy to do this with a person with the help of visualization, signals from some stimuli will clog others, and control the process, much less control it becomes impossible. In the technology to control high-precision weaponsAs a rule, optical means of guidance are used (as being more noise-resistant), apparently, and nature followed this principle when creating a person, preferring vision.

However, pay attention to the remaining 20% of the information we receive from the outside world. A significant amount of this spectrum will give us organs of hearing. Sound.

If it is true what UkrSMI is saying, and the Russians scare them at the border with the ZS-82, then our specialists are on the right path, where the next step after campaigning, broadcasting the clang of tracks with afterburner aviation engines, stun grenades should be working with voice communication, incl. on the air using special sound signals. As an example - the sound of metal on glass, the sound of foam on glass. Take your time to laugh. Knowing the characteristics of the headsets used (headphones, sound reproducing equipment), one should work with background noise at the enemy's radio frequencies, including with elements of electronic warfare (electronic warfare). One of the advantages of this method is that it can be used covertly for a long time, by overlaying several audio tracks, that is, it is not at all necessary to literally creak with foam, you still have to look for a way to bypass noise filters, you need to isolate the most painful frequency characteristics and peak sketches, and use them. It is sometimes impossible to detect this without special equipment. Those who are forced to constantly use headphones become an ideal target, although it is possible to put the ZS-82 directly on the front edge and prevent the enemy from sleeping for a couple of days in addition to the cannonade.

The effect of sound waves that the membrane produces in headphones has been studied quite well and is much more promising for use than any 25 frames or pugs. The fact is that in addition to depressing the emotional state (depressed from classical music is worth something), the formation of anxiety and panic can be achieved auditory hallucinations from the operators of the enemy, who have been working on the air for a long time. Especially if you have to listen carefully.

Ask any psychiatrist: the number of people suffering from sound hallucinations (they hear voices, and not only) gives the largest percentage of the mentally ill. This misfortune — it was heard, it seemed — not infrequently and healthy people suffer, which is a consequence of a narrower in comparison with the visual range of a person’s sound perception, which is easier to manipulate than the visual one.

I hope it’s not a discovery for anyone that music can be a light drug? And now you can laugh.

1. Observation There is no music in the Orthodox church tradition, there is choral singing, bell chime. What in those or other sounds from the evil one, I do not know.

2. Hypothesis. In the aquatic environment, sound is the preferred channel of communication. There is an assumption that the suicidal behavior of large marine mammals, whales, dolphins, coastal emissions in whole flocks is the result of not only man-made human activity, but also the result of disturbances in this communication system. And this despite the sometimes larger and more complexly arranged brain.