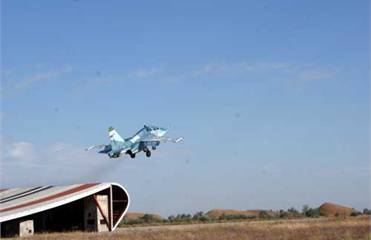 The transfer of Russia to the NITKA landfill in the Crimea will damage Ukraine. About this, as the correspondent of "Rosbalt", said Ukrainian military expert, director of the Center for Army Studies, conversion and disarmament Valentin Badrak.


“Obviously, you know that the other day negotiations were held between the Minister of Defense of Ukraine and the Chief of the General Staff of the Russian Federation. As a result, we see, in fact, that the Ukrainian side is ready to transfer the training complex “Nitka” to the Russians for rent on their terms, ”he said.

Badrak believes that "this is not in the interests of Ukraine." "Including, given the possibility of leasing the complex to other countries, and such interest was expressed more than once," he said.

The expert recalled that “by agreement Russia compensated, and did not pay us for the use of the THREAD. “We received spare parts for aircraft components. In fact, finances did not exceed $ 500 thousand annually. This is miserable when compared with the amount of real rent of such complexes. Therefore, this is an absolutely erroneous decision, ”he said.

As reported, Ukraine is ready to give Russia a rental simulator for deck aviation Thread in the Crimea, said Minister of Defense of Ukraine Mykhailo Yezhel yesterday in Kiev at a meeting with the Chief of the General Staff of the Armed Forces of the Russian Federation - First Deputy Minister of Defense, Army General Nikolai Makarov.

The NITKA range is used by the Russian Federation on the basis of the Agreement between the governments of Ukraine and Russia on its use of 7 in February of 1997 of the year, which was ratified by Ukraine in 2004 of the year.

We are in Yandex Zen
A great interview with Sergey Lavrov: about Ukraine, Obama and Iran
What you didn't want to know about England
13 comments
Information
Dear reader, to leave comments on the publication, you must to register.