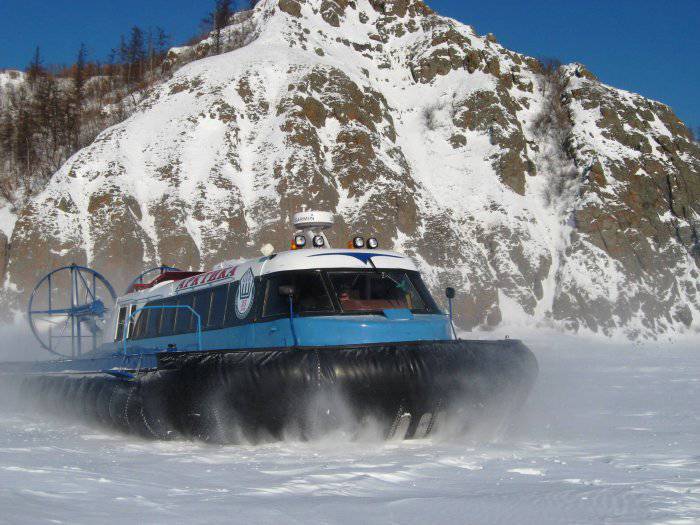 The amphibious cargo platform on the Arktika air cushion, developed by Omsk scientists, was put into service with the Russian army, the head of the Omsk Region Ministry of Industry, Alexander Gorbunov, told reporters on Friday at a press conference.

Earlier it was reported that in November 2010, Omsk designers patented an amphibious articulated cargo platform “Arktika”, which was included in the state register of inventions of Russia.

All-terrain vehicle "Arktika" is one of the priority projects of the Omsk component of the inter-regional program "Siberian Engineering". Unlike boats and hovercrafts, which can only move above water and briefly go to the gently sloping shore, the Arctic can be constantly operated both above the water surface and above the snowy snow, humorous ice, swamp, tundra throughout the year .

The main advantages of the "Arctic":

it is really all-terrain;
weather and season;
has a large power reserve and confirms its capacity;
safety of these machines is ensured constructively;
ecology of all-terrain vehicles confirmed by certificates of conformity;
economical in operation compared to aviation by transport.


This characteristic of the "Arctic" is its main advantage in comparison with domestic and international counterparts.


"Arctic" - snow-swamp and floating hovercraft, designed to move both on land and on water.


Unlike hovercraft that can only travel by water and briefly go to the sloping shore for mooring, the Arktika can be constantly operated both above the water surface of rivers and lakes (regardless of their navigability), as well as above the snowy, torosity overgrown with reed marsh and by land.


The amphibious all-terrain vehicle on the Arktika air cushion does not need roads at all. At the same time, its cruising speed is 80 km / h, and over smooth surfaces it reaches 140 km / h. It is able to unfold on the spot, overcome ditches up to 1,5 meters wide, and on the river maneuver over the water surface with the same efficiency as over land.

In 2008, the city of Omsk hosted the presentation of two all-terrain vehicles on a hovercraft of a new design.

The company TPTS SibVPneftegaz has developed a project for TNK-BP and, for the first time, manufactured a batch of all-terrain vehicles on an air cushion with a lifting capacity of 3 000 kg with an air-driven hydraulic chassis.

The consignment included the cargo and passenger versions of the well-proven in the Northern latitudes of all-terrain vehicles of the third series - "Arctic-3D.K" and "Arctic-3D.KG".

The novelty of these amphibians consists in equipping with a wheel drive all-terrain vehicle on an air cushion, which has never been used in the construction of such machines.

The hybrid of the wheel all-terrain vehicle and the airbag has turned out, as is customary in the company SibVPKneftegaz, a traditionally successful design:

speed over land and water up to 80 km / h;
avoidable lift angle: up to 20о
on propellers using wheel propulsion to 30
with a combined drive and the use of a winch to 40

The Arktika hovercraft is operated at temperatures from + 40 to -50ºС throughout the year, including periods of freezing and ice drifting, almost regardless of the weather conditions and time of day. This is ensured by its design features and the presence of a double-glazed windows as standard, an integrated heating system, a satellite-based navigation system, as well as the equipment of the car with powerful searchlights.

At the request of the customer, the Arktika can be additionally equipped with a night vision system, a thermal imager and a locator.

The machine maintains stable handling and maneuverability at wind speeds up to 20 m / s.

The capacity of the main fuel tanks of the "Arctic" provides the range for a distance of 1100 km, which is 1 / 10 part of the length of Russia from its western to eastern borders. According to this indicator, the Omsk hovercraft has no equal among domestic and foreign analogues. Installing additional tanks allows you to increase the range to 1500 km.

An example of the possibility of overcoming long distances and the reliability of amphibian work is the delivery of the Arctic under its own power to one of the customers in Salekhard along the Irtysh and Ob to 3000 km distance. All that was needed was 2 refueling and 4 days on the road!

Amphibious all-terrain vehicle, depending on the modification, can take on board from 8 to 50 people and from 1 to 5 tons of cargo.

Depending on the model, the loading platform also allows transporting up to 30 people and from 15 to 120 tons of cargo.

The large capacity of all-terrain vehicles and platforms is complemented by another advantage. The design of GDP and AGP provides the possibility of their approach directly to the places of loading and unloading, eliminating the need to use other types of transport for this purpose. In off-road conditions it is very convenient. And from the point of view of financial expenses, even if a helicopter can be landed in some place, the use of GDP and AGP turns out to be many times more profitable.

Ensuring the stability of the all-terrain vehicle on an air cushion is one of the fundamental conditions for its reliable, safe operation. Omsk designers equipped the “Arctic” with transverse and longitudinal stability systems and a device that, if necessary, provides contact with the supporting surface. This contributes to effective braking, ensures the passage of sharp turns, keeping the car on slopes and slopes, turning in place and maneuvering in a wooded area. At the same time, the control of the all-terrain vehicle is basically the same as driving a car and does not require lengthy crew training.

There are no such systems on such machines, so during the development of the all-terrain vehicle Omsk designers received a number of patents.

The buoyancy and unsinkability of Arktika all-terrain vehicles are provided by sealed compartments located in the hull and buoyancy blocks filled with non-combustible displacement material. According to the rules of the Russian River Register, the “Arctic” can move, depending on the model, in water with a wave height of up to 1,2 and 1% security and even up to 2,0 meters 3% security! The GDP buoyancy margin is 200% (!), I.e., in any emergency situations, the all-terrain vehicle is practically unsinkable, and the height of the ice ridges to be overcome for different models can be up to 0,6 meters.

The supporting elements of the hull, buoyancy blocks, fences and air rudders are made of high-strength aluminum and titanium alloys. Flexible fencing - from frost and wear-resistant high-strength rubberized fabric.

The cabin and the cabin of the GDP are reliably insulated, which creates comfortable conditions for a long stay in it, if necessary, of the crew and passengers in low temperatures. The cabin is heated on the move from the engines, and in the parking lot from autonomous heaters. Included with the GDP “Arctic-3D” is supplied stand-alone portable power station 1,8 k / W (220 в). In addition, the all-terrain vehicle has a duplicated control system, is equipped with a dry closet, rescue equipment, as well as communications and navigation.


"Arctic" meets all necessary environmental standards. Depending on the modification, one or two KAMAZ diesel engines 740.35-400 hp with a capacity of 400 hp, which meet the Euro-2 standard, are installed on it.

By order of Omsk Designers, the KamAZ-Diesel Scientific and Technical Center developed and launched a new generation diesel engine, the KAMAZ 740.352-500. This power plant for the upgraded GDP "Arctic" is distinguished by the characteristics of the increased to 500 HP power while reducing fuel consumption (!).

A perpetual misfortune is known when using tracked and wheeled vehicles in the tundra - it takes decades to restore its natural cover (moss moss) after passing machinery. If an amphibious all-terrain vehicle on the Arktika air cushion passes through the tundra, the tundra cover is not disturbed. This is due to the fact that the pressure force of the air flow on the soil 1 m X NUMX does not exceed 2 kg.

For this and numerous other advantages of GDP, one can confidently state that all-terrain vehicles of the Arctic-type amphibious type developed and manufactured by JSC TPP SibVPKneftegaz are truly unique type of off-road amphibious vehicles, indispensable in the most severe conditions.

Ctrl Enter
Noticed oshЫbku Highlight text and press. Ctrl + Enter
We are
China has received an order for the supply of three all-terrain vehicles on the arctic airbagOmsk tanks at a military parade in honor of the Independence Day of Cyprus in October 2012
Military Reviewin Yandex News
Military Reviewin Google News
10 comments
Information
Dear reader, to leave comments on the publication, you must sign in.