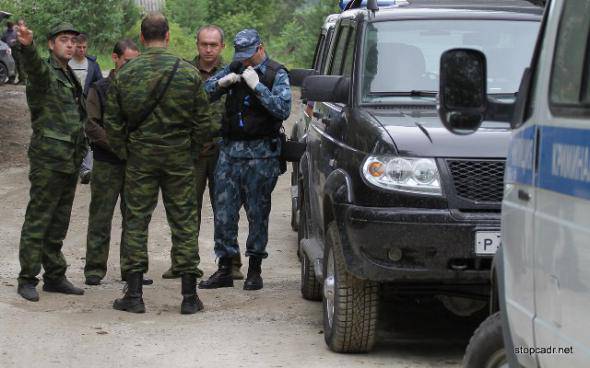 The battle that took place in the small village of Sagra, located in the Sverdlovsk region, glorified this small town all over Russia. The incident itself happened on July 1, however, information about the incident appeared only after more than a week. Recall that a gang of drug dealers, led by a certain Sergei Krasnoperov, nicknamed "Gypsy", attacked the village on the night of July 1. Note that the main forces of the attackers were not indigenous inhabitants of Yekaterinburg. Most of the militants were registered as visitors from the Caucasian republics. According to eyewitnesses, the bandits, armed with guns, edging and automatic weapons, drove to the village on 15 cars. Total attackers were about fifty people. However, the easy walk did not work. The fact that the bandits go to the village, the villagers were warned by friends on the phone. Realizing what was going on, they decided to give a fitting rebuff to uninvited guests. The benefit in these places, many are engaged in hunting, so many homes have firearms. Naturally, the police were immediately called, but she arrived only 40 minutes after the incident.

As soon as the militants reached the railroad crossing, a shootout began. At this time in the Urals, "white nights", so both sides saw everything well, which means they aimed fire at each other. “They opened fire from the windows of cars, if we all were unarmed and did not begin to respond, then, most likely, there would be an order of magnitude more corpses ...” - says Sergey Gorodilov, a resident of Sagra. The shootout lasted for about 25 minutes, after which the gang retreated. During the shootout, one of the militants received a through wound in the stomach and died on the spot. It turned out to be 28-year-old resident of Azerbaijan Said Musayev. At the scene of the battle, investigators found hundreds of spent 5,45 caliber cartridges from a Kalashnikov assault rifle.

The motives of "disassembly" still remain unknown. The prosecutor's office officially rejected the version of the "section" of the sawmill. Also, according to one of the versions, the massacre was provoked by the quarrel between Krasnoperov and Zubarev (accused of killing an Azerbaijani during a night skirmish). The cause of the quarrel was the theft of woodworking equipment from Zubarev's house, which, in his opinion, was committed by two homeless people working for Krasnoperov. Zubarev, arriving at the house Krasnoperova, demanded to return the machines, but did not achieve anything. The gypsy sister threatened that she would complain to her brother, and "will not leave this case unpunished."

"Gypsy" fell into the hands of law enforcement agencies a few days ago, after a second time for some reason I arrived in the village. Next in the list of investigators should be the sister Krasnoperova, who directly negotiated with Caucasians. Recently it became known that on bail of half a million rubles the court released two participants in the attack, who were initially detained by operatives “hot on the heels”. They were 21-year-old Artem Ramadanov and 36-year-old Vitaly Slatimov. This event caused a huge wave of indignation among the inhabitants of Yekaterinburg. Initially, according to investigators leading this case, the above-mentioned citizens were the most active participants in the events in Sagra. There is also information that it was Magomed Bekoev, a native of Grozny, who was detained along with Salimov and Ramadanov, received an “order” to organize the action from sister Krasnoperov.

The public movement “City Without Drugs” even planned to hold a rally of thousands against, in their opinion, an unreasonable court decision. Interestingly, on July 14 a criminal case was initiated against the head of the Sagry-Marat Khalimov ATS Department, according to Part 1 Art. 293 of the Criminal Code classified as "negligence". Khalimov, according to the investigators, “did not take proper measures of prevention and counteraction, which provoked a shootout between the residents of Sagra and people from Yekaterinburg”.

Now everything in the village is relatively calm, although the police outfit has not yet been removed. Law enforcement officers themselves do not want to talk to the press. Even threatened to puncture the tires, if they start to take pictures. Residents directly involved in the events are now absent. Which, of course, is not surprising, considering their position, they can at any moment turn from simple participants in the events into accused. Residents themselves consider the nightly action not at all spontaneous, but well planned. Many attackers are already known to operatives. True, most of them are long gone in Russia.

The recent events with Sagra have once again confirmed the fact that the decline in the number of organized crime, about which officials from the Ministry of Internal Affairs have recently reported, is not true. On the contrary, this case proves that the bandits are increasingly feeling their impunity. Only a huge resonance of the case in the media allowed the organizers of the massacre to be brought to justice.

Following the arrest of Sergey-Gypsy, Marat Khalimov, the police chief, who allowed a shootout in Sagra, was charged

A criminal case has been opened against the head of the Department of Internal Affairs in the Verkhnepyshminsky and Sredneuralsky urban districts of the Sverdlovsk region Marat Halimov. The colonel is still suspected of committing a crime under Article 1 Art. 293 of the Criminal Code of the Russian Federation (“Negligence”).

But there are good reasons for assuming that the role of Halimov in the Saghra stories not limited to negligence.

On Saturday, July 9 (on the day the regional governor arrived in Sagra), I asked Halimov:

- Marat Rafailovich, how can we explain that the “Interception” plan was not announced, which, according to all police instructions, is always announced after receiving information on the use of weapons?

- It was necessary to understand. The crews of PPS left for Sagra.

- But after all, from Sagra there is only one road, those who arrived could be met in Upper Pyshma, as they say, without a doubt, and would not have had to catch them all over Russia.

The question remained unanswered. It was not possible to hear a clear answer to the question of why the police did not leave for Sagru immediately after receiving a signal that a convoy of vehicles with bandits was heading there. Khalimov claims that there was no call directly to the police department:

“The pay phone is worth it,” the officer said to the payphone installed at the first-aid post. - It was necessary to call him, not by mobile.

When, in the presence of Khalimov and journalists, we tried to reach 02 using a payphone, we invariably heard: “The subscriber is not available”. Explain why a call from a payphone is preferable to a call from a mobile, the colonel could not.

In addition, it turns out that it was Khalimov during the interrogation of a participant in the shootout, Sergei Zubarev, who demanded that he confess to the murder of the “thief in law of Zaur’s nephew,” promising “decent conditions of detention in the colony”. But Zubarev never admitted anything.

Tatiana Gordeeva, a resident of Sagra, claims that local women armed with forks and other improvised means, after an exchange of gunfire, on the night of July 2, detained two “guests” who had arrived in the village and were trying to leave in one of the cars abandoned at the exchange of gunfire. And they passed them to the police. But one of the detainees called Khalimov, and the police immediately released these two participants of the “raid to Sagra”.

There is no answer to the question of how Sergei Krasnoperov (nicknamed Gypsy) lived in Sagra for almost ten years, who actually turned out to be Vyacheslav Lebedev, who was on federal wanted list for hooliganism and the use of violence against a representative of the authorities from 1995.

In the Sverdlovsk region began arrests. By noon, July 14, except Krasnoperov-Lebedev, were arrested 36-year-old Vitaly Slatimov, 27-year-old Magomed Bekov, 21-year-old Artem Rabadanov (by the way, a student of the 4 course of the Ural State Law Academy). The nationalities of both those already arrested and those participants in the night raid to Sagra, whose personal data are established, show that the original version of the mono-ethnic gang was not confirmed. (It is also incorrect to state that the head of the local police, Marat Halimov, is Azerbaijani. In fact, Halimov is a Tatar, but a native of Baku.)

The siloviki continue to refrain from drug trafficking as the main cause of the shootout in Sagra, arguing that they have no information that drugs were sold in this locality. Meanwhile, for residents of the entire Verkhnepyshminsky district, this fact is well known. The relevant data is also available in the famous Yekaterinburg Fund "City Without Drugs". And the amount of information on the involvement of Krasnoperov-Lebedev in the drug trafficking is increasing. The leader of the Foundation "City Without Drugs" Yevgeny Roizman is ready to provide all this information to security officials.

We are in Yandex Zen
About Stalin and Khrushchev
What you didn't want to know about England
19 comments
Information
Dear reader, to leave comments on the publication, you must to register.