August 21 2014
95
Dmitry Semizorov, head of the Central Scientific Research Institute of Precision Engineering (TsNIITOCHMASH), noted that the new Russian combat equipment of the third generation will be created from fundamentally new materials. Such a kit will have more than 50 different elements. Earlier there was information that the third generation combat equipment, which should replace the adopted “Warrior” kit, will be developed in 2017 year. To master its mass production in Russia is calculated in the next decade.


According to Semizorov, the number of elements in the new outfit will surpass the “Warrior” kit (around 50 elements), but their number will be determined by the final customer, that is, the RF Ministry of Defense. “The most important thing is not the number of elements, but the fact that everything else will be qualitatively new: new technologies, new approaches,” Dmitry Semizorov told reporters at the Oboronexpo-2014 exhibition, which was held in Zhukovsky near Moscow.

According to Sergey Sakharov, General Director of ZAO FORT Tekhnologia (Moscow), some elements of combat equipment were not included in the second generation kit, while they are considered promising. The experience gained from their creation is sure to come in handy when working on third-generation gear. At the same time, Sakharov noted a continuing dependence on imported components, although less. He stressed that the main content of one of the company's body armor is armor of the Russian assembly. Its weight is 3,5 kilogram on 1 square. meter. Such armor is able to provide reliable protection against a bullet fired from a Stechkin pistol when fired at close range with a pressure of 10 kg. But the inserts of ceramic plates in the vest are still foreign. 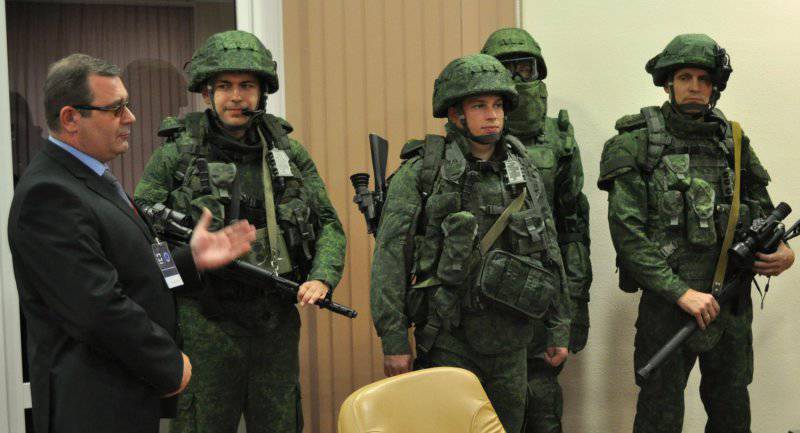 The company also developed armor of lesser weight - just 2,5 kg per 1 square. meter. Such armor is able to protect the chest, back and sides of a soldier in 6A protection class. At the same time it is made entirely of domestic materials. In general, such an armored set can provide a soldier with protection even from hitting grenade launchers or shrapnel from an RGD grenade. Russian designers are confidently moving forward, developing their own development.

The components of body armor already created at the moment can be used in the next generation combat gear. This is confirmed by Oleg Bochkarev, who holds the post of chairman of the military-industrial commission under the Russian government. To this end, the state-owned company Rostec and holding RT-Chemcomposite are now implementing a fairly large joint program to create the missing Russian components for combat equipment, which will then be sent for approval to the Ministry of Industry and Trade.

In the meantime, the Russian army is waiting for a set of combat equipment of the second generation "Warrior", it is often also called the "kit soldier of the future." In August of this year, we can say that the tests of the “Warrior” kit have been completed, the image of the equipment kit has been formed. In September 2014, the military operation of the “Warrior” will begin, during this operation, all the shortcomings will be eliminated. The first mass deliveries of the kit to the Russian army are planned for October; every year the Russian armed forces will receive thousands of Ratnik kits for 50. The fact that the procurement of the kit will begin in October, said Alexander Romanyuta, who holds the post of head of the military-scientific department of the ground forces. 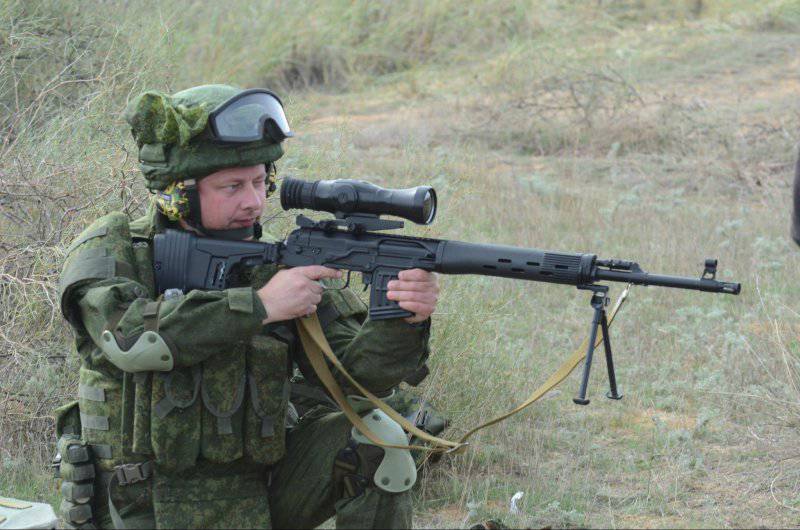 According to Dmitry Semizorov, recently specialists have achieved significant success in improving the characteristics of the various components of the “Warrior”. For example, the accuracy of the weapons that make up the combat gear was increased by 1,5 times, penetrability - by 1,7 times. Also increased the detection range of the enemy - in 1,2 times. According to the head of TsNIITOCHMASH, the protective characteristics of the “Warrior” have improved in 2 times, while the protected area has also grown. On 30% it was possible to reduce the mass of the life support system, which is included in the “Warrior”. But along with this, a number of problems remain, in particular in the field of management and communications, for example, in Russia there is still no suitable radio station of the 6 generation.

"Warrior" is a modern complex of means of protection, weapons, communications and ammunition. Research and development work on this project was carried out by dozens of domestic defense companies, which include FSUE TsNIITOCHMASH, NPO Spetsmaterialov, NPO Spetstekhnika and Svyaz, and others. The general designer of Ratnik was Vladimir Nikolaevich Lepin. It should be noted that the Federal State Unitary Enterprise TsNIITOCHMASH (Central Research Institute of Precision Engineering) is a key enterprise for the Russian defense industry. With his direct participation, over the course of 70 years in our country, more than 120 of various types of artillery, anti-tank and small arms, various ammunition and military equipment have been created and introduced into production.

For the first time, “Warrior” was shown to viewers at the MAKS-2011 air show. The military trials of the kit began in December 2012 of the year and were conducted on the basis of the Alabino training ground near Moscow by the 27 fighters of the separate motorized rifle brigade. According to the results of the military tests carried out then, the elements of the “Warrior” outfit received positive feedback from the Russian military command. 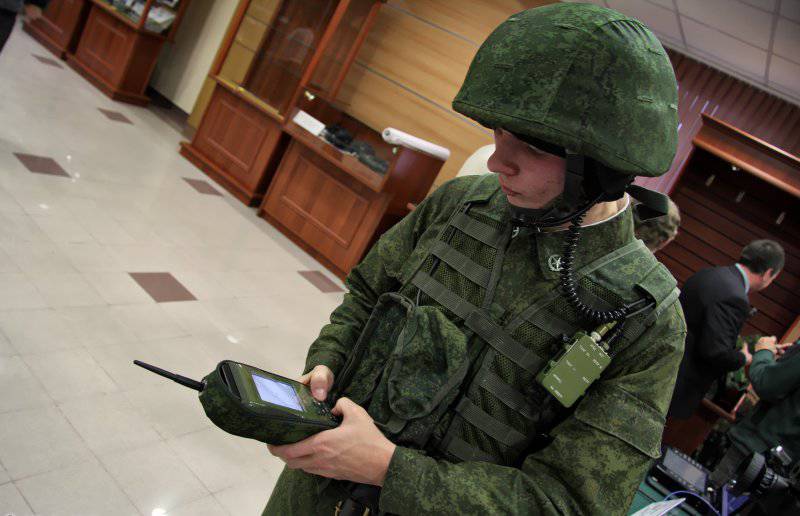 Combat gear of the second generation "Warrior" combines an effective protection complex, modern small arms, communications, reconnaissance and target designation, just about 10 different subsystems. In addition to direct combat functionality, it is designed to provide effective protection for servicemen in battle against various damaging factors. The kit includes the order of the 50 various elements. The set of combat equipment "Warrior" is one of the components of the overall project, which aims to improve the qualities of an individual fighter on the battlefield through the use of the latest scientific achievements in the field of night vision systems, navigation, tracking the psycho-physiological state of the fighter, as well as the use of advanced materials in the production of armor plates and clothing fabrics.

The devil is known to be in the details. Very much in battle depends not only on the weapon, but also on what is worn on the soldier, whether the fighter feels comfortable in various climatic and meteorological conditions. In this regard, new equipment is a serious step forward. The new uniforms, which are part of the combat gear, evoke positive emotions from the experts. These are warming underwear, and new shoes with increased wear and frost resistance, as well as waterproof socks with new membrane manufacturing technology. A leg in such a sock can be dipped in water for 5 minutes and at the same time it will remain completely dry. At the same time, in such socks, the legs not only do not get wet, but also do not sweat, which is especially important when making marches or actions in mountain-desert terrain in conditions of heat.

The average lifetime of one set is defined in 5 years. In this case, a set of combat equipment will be transferred from one soldier to another, until he falls under write-off. Naturally, the various elements of equipment have different lifetimes. For example, a T-shirt with flaps is designed only for one soldier, the summer uniform will have the owner’s 2, winter uniform, body armor, helmets, small arms and knives designed for a much longer service life. The new “Warrior” kits should receive the Airborne Forces and Ground Forces units, as well as the Marine Corps of the Russian Navy. The first will receive them some parts of the Western Military District. It is assumed that during the 5 years, the Russian Armed Forces will completely switch to new equipment.