August 20 2014
55
By the end of the year Ukraine plans to introduce general military training for all military servicemen, reports Независимая газета. 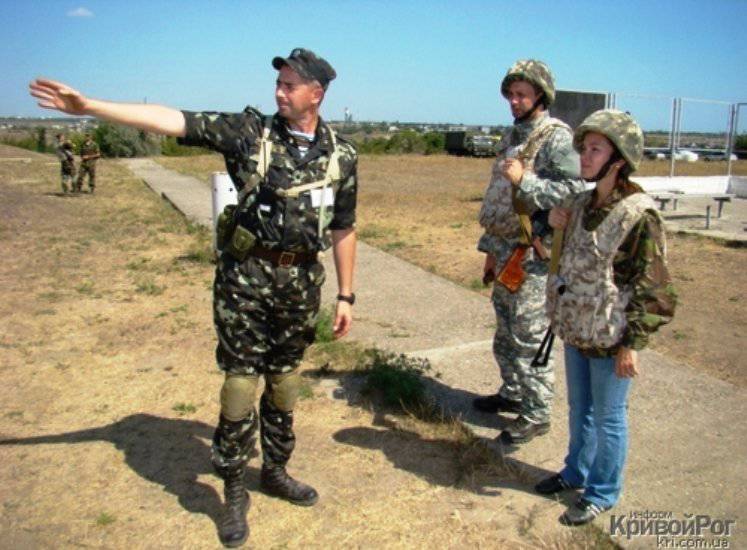 As stated in the Ministry of Defense of Ukraine, “the course of the young fighter will be held by all military-obliged citizens of the country. In the near future, the first experimental groups will be organized in large cities. The main principle of their training will be territorial defense in case of war. ”

The ministry also said that "the program is planned to solve the problem of training personnel for partisan and sabotage and intelligence networks, which will be involved in the occupation of certain territories in the event of open aggression against Ukraine."

Regarding the ATO in Kiev, gloomy predictions are being made, since negotiations with the Russian Federation did not even lead to a common understanding of the problem. Ukrainian authorities refuse to stop ATO in the east of the country and demand from Russia “to establish full control (with the participation of the OSCE) over the Ukrainian-Russian border in order to block the ways of entering the Donbass weapons, military equipment and the so-called volunteers. " In addition, Kiev is demanding the release of all prisoners, including the pilot, Savchenko.

However, according to the head of the Ukrainian Foreign Ministry, Pavel Klimkin, “Russia did not recognize its participation in the conflict in the east and did not accept Ukrainian conditions.”

Given the current situation, Petro Poroshenko on Monday gathered his security officials for a meeting and said that it was necessary "to consider the new content of the military operation in new circumstances." He ordered the military to "re-group forces to ensure the protection of the territory in the face of increasing supplies of reinforcements to supporters of the self-proclaimed LC and the DPR." He also pointed to the need to "cut off the path of such supplies." It was about special training for military service.

According to military expert Igor Koziya, the authorities apparently plan to renew the system of military training in the Soviet Union so that citizens do not lose their military skills.

“In recent years, the army has been systematically destroyed. The armed forces were financed on a residual basis, and professionals were forced out of the leadership. We see what it led to. Now the government has paid close attention to the issues of defense and national security. Although, in my opinion, the army even now receives about a third of the necessary resources. ”- the expert expressed his opinion to the correspondent of "NG".

So far, no attempts by Kiev, including mobilization campaigns and the formation of volunteer battalions, have brought a radical change in the confrontation in the Donbas. Hopes for an early victorious completion of the ATO did not materialize.

The Ukrainian authorities are still hoping for help from the West, but from there they began to receive disappointing news. For example, Finnish Prime Minister Alexander Stubb replied: "This is impossible neither from the side of NATO, because the alliance provides military assistance only to its members, nor from the EU, which lacks the capacity to provide such support."

Of course, Kiev places its main hopes on the United States, where there are constantly calls to arm the Ukrainian army. But there is not so simple. The newspaper writes that “the question of direct military assistance can only be considered if Congress and the Senate approve the granting of ally status to Ukraine without membership in NATO. And if a declared war will be fought against Ukraine. ”

Ukraine in various ways is trying to push the West to a more active position. One of the options was voiced by the Speaker of the Rada Alexander Turchinov during his visit to Lithuania. He said: "Ukraine today protects not only itself, but also the security system in Europe." According to him, in the east of Ukraine there is no civil war, there the army reflects the aggression of Russia. “Ukraine is ready to resist aggression, but we really do not have enough weapons,” said Turchinov.

In an interview with NG, expert Vitaly Bala noted that “the Ukrainian military participating in the antiterrorist operation lacks not only weapons and modern means of protection, but also competent leadership. Under these conditions, the initiative of the Ministry of Defense about the mandatory training of all persons liable for military service is questionable. ” According to the expert, for this "there is no organizational capacity."

“And if it is a question of holding charges, as in Soviet times, then there is no sense in it. This will turn into a formality - for show. Ukraine would have to take as a basis the experience of some Western countries in which the army is organized according to the principle of territorial defense: civilians not only know how to hold weapons in their hands, but have the right to keep them at home, maintain close ties with each other. Two hours - and the whole population is ready for battle "Said Bala.

But the Ukrainian authorities are afraid to hand out weapons to the civilian population. The Verkhovna Rada refused to consider this issue. The deputies understand that illegal weapons held by people can bring considerable problems, but they don’t know how to solve this issue.