NATO settles in the Caucasus 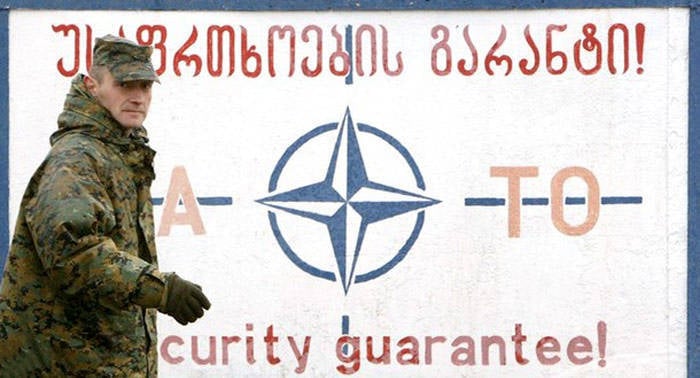 In Imereti, at a military base in Western Georgia, the soldiers of the North Atlantic Alliance conduct training combat operations in the mountains. Sachkhere military base is located near the border with the Russian Federation. She appeared here in 2005, when Georgian President Mikhail Saakashvili began training large-scale hostilities in South Ossetia.

The Georgian Ministry of Defense stated that military training from NATO countries would be openly going on at the Sachkher military base, as the NATO standard was officially assigned to this base.

Official Tbilisi said that now the training will be carried out by Georgian instructors, who have undergone special training in France over the past three years.

The solemn ceremony devoted to the opening of the Sachkhere school for training mountain shooters was not accidental with the participation of the Deputy Minister of Defense of Georgia Nodar Kharshiladze and the Ambassador of France Eric Fournier.

Summer and winter maneuvers will be held at this military center for training the military from the North Atlantic Alliance. Already this September, the first military exercises from the Baltic countries, the Czech Republic and Poland will be held here. It is planned to subsequently arrive military from other NATO member countries.

In 2010, Grigol Katamadze said that mountain riflemen are trained in Georgia using modern, unique techniques. Mr. Katamadze is the ambassador of Georgia to Ukraine. According to him, even then military men from the USA, Great Britain and other countries were trained here. From now on, on this base, the training of such military will be held officially.

What will be the preparation and how it will take place, one can only guess about it. In the future, the base is planned to upgrade.

The learning process itself will be held in English; for this, the Georgian Ministry of Defense has developed special language courses.
Why does NATO need such a demonstrative presence in Georgia? South Ossetian and Georgian experts Inal Pliev and Georgy Kadzhaya shared this interesting question in an interview with Pravda.ru. We pass their words.

Georgy Kadzhaya, a Georgian political analyst, says that the appearance of a military base in Sachkherer is not accidental, and the presence of the French ambassador there is a direct demonstration for the Russian government that the North Atlantic Alliance is taking Georgia under its protection. And if official Moscow’s policy continues to be aggressive towards Georgia, then civilized countries from NATO will stand up for its defense. This is another confirmation that Georgia has firmly decided to join NATO.

Another independent political analyst from South Ossetia, Inal Pliev, describes the situation like this, he says that the military base in Sachkhere, on the border with South Ossetia, is the efforts of France, which has recently shown militancy and aggression towards other countries. He also noted that this is similar to intensive preparation for aggression against Russia and South Ossetia. And Georgia is a pawn, playing a subordinate, secondary role. Without instructions from the governments of the member countries of the alliance, it will not do anything. The most interesting thing is that the NATO leadership is fully aware of how provocative their actions in this region are, but continues to act in that spirit.

Therefore, a full-fledged base was created for training the military from the alliance in order to strengthen the positions of NATO in Georgia. Everyone remembers well how even before 2008, the Americans declared with full confidence that those Georgian units that had been prepared by the United States would not get into South Ossetia. However, their words were at odds with their actions, the Georgian units were there, and they were not distinguished by little.

Inal Pliev also noted that fortifications around the perimeter of South Ossetia were created and military forces were pulled up. Long before that, in 2006, the construction of a military hospital and a morgue for two and a half hundred places began. And what is beautifully visible today in Sachkhere may be the beginning of the emergence of more and more new Western military bases of this level in the region where the borders of South Ossetia, Abkhazia and Russia are so close.

We must not forget that those who encourage the aggressive aspirations of Georgian President Mikhail Saakashvili in relation to the previously mentioned countries will also continue to be encouraged. It is possible to recall how Georgia, even then, was already building up the already difficult situation in the region. Themselves staged a terrorist act, and they themselves conducted its investigation. And South Ossetia was called a terrorist breeding ground, which must be destroyed and as soon as possible. Such instability, which is created artificially only in order that, on occasion, NATO could intervene unhindered in any conflict situations.

It became known that in this mining preparatory school there will be training of combat units from the countries of the North Atlantic Alliance. Who is on this list is not yet known, for now, one can only guess. There was information that the airborne units from Armenia were trained at the base. The Georgian side considered the issue of training on the basis of puppet fighters from the army of Afghanistan.

It became clear that the Ukrainian units, withdrawn from here due to the approach of troops from Russia and South Ossetia in August 2008, would return here in 2011 year. Information appeared in the media, which is quite contradictory. The press in Georgia wrote that the base was seized by the Russian military on August 16, while there is another version.

According to which, having learned about the approach of the Russian units to the Sachkher military base, the already mentioned French ambassador to Georgia, Eric Fournier, immediately arrived there in order to defend the base with his personal presence, the beginning of which France laid down. What they achieved during the negotiations. Therefore, the military specialists from Russia did not manage to learn about the objects located in Sachkhere. Russian soldiers stopped near the village of Perevi, which is located a few kilometers from the military base.

It became known who exactly of the Ukrainian military are waiting in Western Georgia, it will be a separate guards mountain infantry battalion of the 13 Army Corps, which is stationed in the Carpathians.

Ukrainian Defense Minister Mikhail Yezhel said that there is an excellent and well-established center in Sachkhere, which is designed to prepare military specialists for combat operations in the mountains. He also noted that there is something to learn there, and on the equipment of the landfill, and on the armament of mountain rifle units and the tactics of their actions.

It was also noted that Ukraine is ready to train Georgian military at its bases, such as the National University of Defense Academy named after Nakhimov, as well as in other military universities.

Everyone received another confirmation that Ukraine has become one step closer to the full restoration of military-technical cooperation with the Georgian side, as was the case with the previous president, Viktor Yushchenko. In addition to this, the Ukrainian side took another huge step towards rapprochement with the North Atlantic Alliance.

However, official Kiev, justifying itself, states that there are no special centers for mountain rifle training of military personnel in Ukraine. Ukrainian Defense Minister Mikhail Yezhel said that in Europe only Austria and Switzerland have specialized centers for training such shooters, training Ukrainian military specialists in these centers costs a lot for the government of Ukraine. However, in his words, a high-ranking military officer was a gossip. It is hard to imagine that Germany, Italy and France do not have their own training centers in the Alps for training their mountain shooters.

Now it becomes clear that the military from the North Atlantic alliance gather under peace-loving slogans, to work out combat operations in relation to the Caucasus region. Only now it will happen openly and without hindrance.
Ctrl Enter

We are in Yandex Zen
South Ossetia wants to Russia. How will the republic solve the problem of reunification?
Russia and Georgia: traps from "well-wishers"
9 comments
Information
Dear reader, to leave comments on the publication, you must to register.