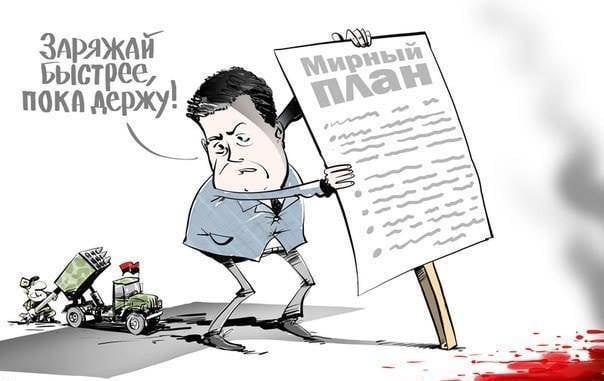 And now we will talk about sects. Yes, yes, it is about them, but not “Jehovah's Witnesses,” “Adventists of 7 Day,” “Devi Maria Christ,” and dozens of different interpreters of religion. It will be a question of a new sect, which has been formed literally in recent months in Ukraine and its name is “Witnesses of the column”, and the Russian one. It is headed, no, not by the pastor Turchinov (to whom the sects are written to lead), but by the president himself, Mr. Poroshenko Square.

Of course, it all started earlier. Two or three months ago, the first “witnesses” in small numbers appeared on the territory of Ukraine. But the birthday of the new sect is 16 August 2014 of the year. On the night from 15 to 16.08.2014, Mr. Poroshenko came in a dream (who?) And said: now, Petya, the very first witness, and your duty is to bring it to the people. And then, barely breaking his eyes, Petya began to call his Cameron boss in Nlag Saxon, informing him that he had become a “witness to the column”. And, of course, the closest circle informed about their “great” destiny, they immediately got into the new teaching and immediately enrolled in the parishioners. The saint Peter’s insight was communicated to the people, who, during their stasoric, thousand years history More than once, the new messiah was being put forward from its ranks in order to save the world, and the people, shouting “Hurray!” applauded their “spiritual mentor.”

And it began: from all sides, new adherents of the sect began to appear on the network and on TV, who with shouts of “I am also a witness of the column” were beating in ecstasy, who were at the keyboard, and who were just splashing saliva into the microphone in the TV studio.

And bang in the eye, crunching in the gut, splattering in the ear, slapping the “soft spot” (Lyashko). This is how the first meetings of the new “Witness of the Column” sect were fun and soulful.

In conversations at meetings, quarrels and squabbles about the number of columns flared up, but in one the sectarians were united, there were Russian tricolors on all seen columns. There were, of course, still minor disagreements, but they mainly concerned the question of “in what capacity” did the column come to you? In the military or humanitarian? Most of the adepts said that in the military, otherwise either the column is not the same, or you are not a real “witness”. Trying to attract new adepts from across the ocean and from the territory of Europe, the new head of the sect "Saint Peter" began to spread his teachings to the West, but either the Russian "eyes blurred" to the West, or the West did not look there, but people did not like it The new teaching (for the most part) and the "emphasis" did not see any columns. No, you have not yet reached my revelations, he said, “Saint Peter,” but we see!

Yes, see, please, answered Petya in the Russian Foreign Ministry, no one forbids you to see, but do not forget to undergo an annual examination of the medical commission.

The church is powerless here, it heals souls, but completely different people are engaged in the head - psychiatrists. But such a number of them in Ukraine will not reach.

There is, however, one option: start from the top. However, representatives of the top in the hands are not given, they say that they are normal, but the whole world has gone crazy.

How not to recall here one statement by a psychiatrist: "If you say that you are insane, you are healthy, and if you do the opposite, then you are with me." And urgently. After all, fools think that they are normal people, and normal people around them are fools.