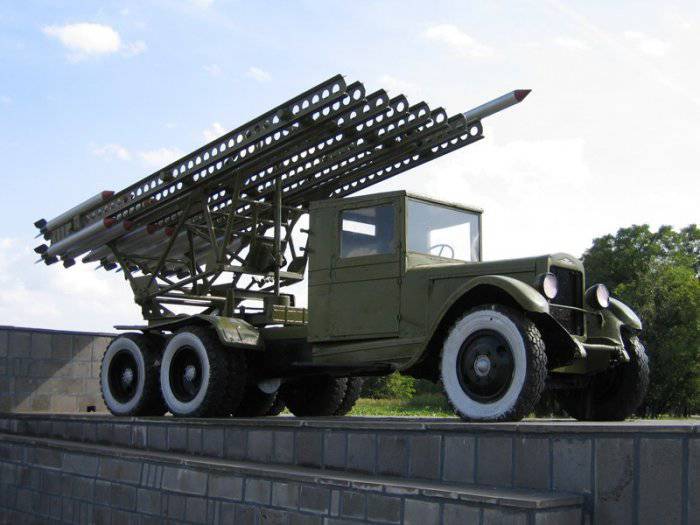 Ten days later, after the moment when the Great Patriotic War began, a convoy of military trucks commanded by Captain Ivan Flerov was sent from Moscow to the western frontiers. Seven three-axle ZIS-6 and about forty vehicles with ammunition with strange tarpaulin-enclosed structures behind the cab drove on the way to Orsha — the railway junction in Belarus.

There, in the turmoil of the first military months, several dozen Soviet military trains stuck with weapons, ammunition and fuel. Already 14 July Orsha was captured by the Germans. To prevent this railway junction from getting them, they sent a new Soviet super weapon into battle. Then he was not called "Katyusha" yet.

The Germans could not even understand what happened when the station turned into a burning hell. And for several months, until they captured an intact rocket launcher with ammunition, their intelligence talked about the use of the Russian military, toli "guns that threw rocket-like projectiles", toli "automatic multi-gun fire throwing."

At the beginning of winter, the battery of Captain Flerov was surrounded by the enemy, and then the captain blew up the head unit, sacrificing his life. Only 46 people from 160 have returned to theirs. But the rumor about "Stalinist organs" or "Guards mortars" has already gone for a walk on all fronts of defense.

Powder rockets were invented in China about a thousand years ago. And even in the nineteenth (XIX) century, they were still used in the Central Asian campaign of the Russian army and the Crimea, but after the appearance of rifled artillery they forgot about the use of missiles - they were very inaccurate. However, interest in them appeared in different countries after the First World War, when the rocket became very suitable for delivering chemical weapons.

And in the Soviet republic, chemists were the customers of the new weapons. Already in the summer of 1938, shells with chemical fillings were tested at the Pavlograd artillery range. In the test report, it was said that 8 liters of agents (toxic agents) are contained in the warhead of this missile, and only 2 liters are in artillery shells of the same caliber. To create a dead zone on an area of ​​12 hectares, only one volley from three vehicles was enough, which can be compared with a hundred howitzers.

For a long time, people believed that "Katyusha" was created by a group of authors, a secret research institute-3, led by Andrei Kostikov. However, in 70-ies, it was found out that this was the work of the chief engineer of the Research Institute Georgy Langemak, and Andrei Kostikov did only what he “tapped” on Langemak in the NKVD and after he was arrested, he took his place. Georgy Langemak was shot in 1937, and Kostikov received the Star of Socialist Labor (1941) and the copyright certificate for Katyusha (1940).

By the way, "Chemical Past" for a long time pursued "Katyusha". There was a rumor, for example, that the USSR, violating international conventions, was stuffing shells with white phosphorus - and this is an extremely combustible and very poisonous substance. Well, in reality, conventional explosives were used in shells. And an exceptional effect was achieved due to firing by volleys - the law of the addition of impulses was in force here. Recalling the veteran of one of the parts of the reactive artillery Yuri Novikov said that after a volley of one battery “such a blast wave appeared that the Germans, who had come under attack without being killed, were stunned, contused, helpless and when our infantry after the salvo with a cry they got up and fled, the Germans could no longer do anything. ”

In the Red Army, the Katyushas became part of the Guards mortar regiments of the General Command Reserve (RGK), each of which had 3 battalions, and 2 batteries in the battalion. "Katyusha" usually used massively in the directions of the main attack. Such regiments were sent directly to the fronts and were not part of the army. Service in a regiment of guards mortars was considered prestigious and relatively safe. The "Katyushas" were important to the command, and they simply were not sent to the front line.

On the fronts, the "guards" also did not remain in vain, because if the machines did not leave firing positions immediately after the volley, then in a few minutes the batteries could easily have been destroyed by German artillery.

“Veteran-rocketman Alexander Panuev always said throughout the war: the number one problem in the Russian guards mortar units was the delivery of projectiles. We just ruined the country. Plants did not have time to release shells. Well, you imagine! If the 384 regiment launches missiles - they need to be driven! And if two, three volleys? This is already a thousand shells! And such regiments were 115! ”

It would be naive to think that thoughts about the modernization of rocket weapons only occurred to Soviet designers. Giving doubt the honor of the first use of multiple rocket launchers (MLRS, this abbreviation appeared later) during World War II and belongs to the Germans. Already in the summer of 1941 of the year, 22 of June against the Brest Fortress 9 batteries of the fourth regiment of special-purpose mortar bombs were exposed. They turned out to be 6-barreled 150-millimeter mortars "Neblverfer" which were named after the creator of them - Rudolf Nebel. We called them in different ways: “creak”, “donkey”, “foolish”, “Vanyusha” ... The first two nicknames were obtained because of the characteristic sharp sound of the mines taking off. Another trademark of the Nebelverfer was a thick smoke plume that unmasked German missile positions. And also a German mortar at the beginning of the war was pulled by a horse cart, then they began to tow the trucks, and all because the installation was not self-propelled ..

The differences between the Katyusha feathered missiles and German mines that did not have wings were enormous. The German shells in the fly stabilized only by rotation, like an artillery shell or a bullet. It is interesting to know that when the German industry in 1943 received an order from the SS to copy the Katyusha projectile from the Soviet model, all but one was done. Stabilizers set at an angle from the longitudinal axis of the rocket, which again gave it a rotation in flight.

The United States later than other countries began the creation of a missile and a mobile installation for launching these missiles. The first model was developed in 1942 on the chassis of the Studebaker trucks. In terms of firing range, volley power, and accuracy, they were much inferior to similar German and Soviet jet systems. And only in 1944, the Americans managed to design a combat-ready installation, which could be compared with the Soviet "Katyushas" according to individual characteristics. The basis for this jet system served as a medium-weight tank "Sherman". Then a 60 package of tubular guides for the M8 shells of the 4,6 inch caliber (115 mm) was mounted on its turret. The weight of one volley was 960 kg, and the maximum range of the shot - 3.8 km.

The British also had their own Katyusha prototype. The British used the first rocket artillery during the landing of the 6 in June of the 1944 in Normandy. Then from the support ships equipped with rockets, about forty thousand rockets were fired on the heads of the Germans in 1 day.

Curiously, where did the name "Katyusha" come from? However, it is not known for certain yet. Criticism can not withstand any of the versions proposed by historians. Nevertheless, this word is still in use throughout the world. In any case, this is exactly what the katusha missile (Katyusha rockets) calls the Palestinian rockets, which occasionally explode in Israel.
Ctrl Enter

We are in Yandex Zen
Katyusha: Year 1941
Great Victory in Photos
4 comments
Information
Dear reader, to leave comments on the publication, you must to register.