August 20 2014
11
In early July, the Russian-Indian company BrahMos Aerospace conducted another test launch of the BrahMos rocket. The 44 test launch within the framework of the international cruise missile development program was carried out using a ground-based launcher and made it possible to test the operation of the modernized control system. A few weeks later, Russian and Indian experts spoke about the future future of the BrahMos project and plans to create new family missiles. 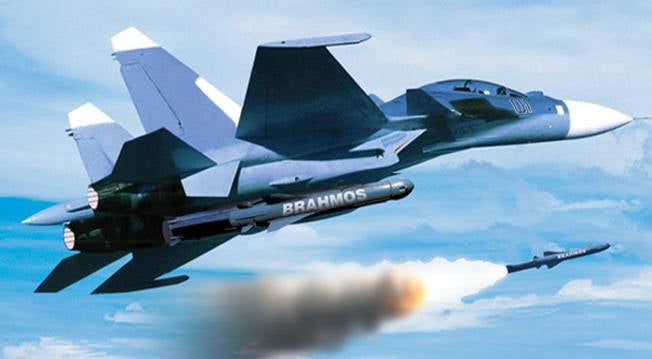 The main efforts of the developers are focused on creating a version of the BrahMos rocket, intended for use by military aircraft. The land and ship version of the missile has already been developed and operated by the Indian military, but aviation modification is still at the testing stage. A few days ago, Sudhir Misru, Managing Director of BrahMos Aerospace, spoke about the progress of work on an aircraft missile. According to him, the BrahMos airborne-based missile itself is already ready. Currently, work is underway to finalize the Su-30MKI fighter, which is to become the carrier of a new rocket.

By the end of this year, it is planned to complete all assembly work, so that at the beginning of 2015, the entire aviation complex will be ready for testing. Thus, the tests of the aviation version of the BrahMos rocket will start next year. S. Mishru noted that the work is proceeding in accordance with the schedule, thanks to which the new rocket will be adopted by the Indian Air Force in the 2016 year, as planned earlier.

BrahMos aircraft modification of the rocket has some drawbacks, which became the reason for the emergence of a new product family. The fact is that in the near future, the sole carriers of the BrahMos missile will be Su-30MKI multi-purpose fighters, each of which is capable of carrying only one such ammunition. Such restrictions are associated with the dimensions and weight of the rocket. For this reason, it is planned to develop a new rocket of the BrahMos family with smaller dimensions.

Currently, the project of a promising compact rocket is called the BraMos-Mini. About similar plans of the Russian-Indian joint venture became known in February of this year, during the exhibition DefExpo-2014, held in India. Later it became known that the BrahMos-mini rocket would be approximately half the size of the base product of the family. At the same time, it will be able to reach a speed of more than three times the speed of sound, and fly to a distance of 290 km. The payload is declared at 300 kg.

Back in February, it was reported that the creation of the BraMos-mini compact missile would allow greater flexibility in the use of such weapons as aircraft armament. So, the Su-30MKI fighter can carry only one large (length around 10 m) and a heavy (2500 kg) BrahMos missile. Smaller dimensions of the BrahMos-Mini rocket will allow an increase in aircraft ammunition while maintaining acceptable combat qualities. Su-30KI will be able to carry up to three such missiles, a promising fifth-generation fighter - two.

It should be noted that the BrahMos-mini project has not yet entered the development stage. The basic requirements for the new rocket have already been identified, but its development has not yet begun. The works will start after the signing of the relevant agreement. A trilateral agreement between the Russian NPO Mashinostroyenia, the Indian Defense Research and Development Organization DRDO and the company BrahMos Aerospace will be signed this December. The document will be signed during the visit of Russian President Vladimir Putin to India.

Rocket BrahMos-Mini will be developed on the basis of developments in previous projects of the family. Because of this, as expected, the creation of a new rocket does not take much time. In accordance with current plans, a smaller version of the missile will be put into service in the 2017 year. S. Mishra claims that the BrahMos-mini rocket will be used not only on existing fighters. In the future, fifth generation fighters, as well as submarines, can become its carriers. In particular, the dimensions of the new rocket will allow it to be launched through existing torpedo tubes.

The publication "The View" gives some details of the new project. The overall appearance of the BrahMos-Mini rocket will remain the same: a large elongation body with a frontal air intake and a folding wing. The rocket length will not exceed 6 m, the shell diameter will be approximately 0,5 m. This will equip the ammunition with a 300-kilogram warhead and a straight-through jet engine that provides flight speed at the level of 3000-3500 km / h and range to 290 km.

The rocket of the new model will be used as a weapon for Su-30MKI planes, each of which will be able to carry three such items. In addition, the BrahMos-mini can be integrated into the armament of MiG-29K / KUB fighters with the suspension of two missiles. In the future, it is possible to create a modification suitable for launch using submarine torpedo tubes. The possibility of using the missiles of the new model of anti-submarine aircraft IL-38SD is mentioned.

At the moment, the BrahMos rocket is one of the most successful examples of military-technical cooperation between Russia and India. Joint work on the project, named after the Brahmaputra and Moscow rivers, started in the late nineties. The project resulted in the creation of a cruise missile that can be used as part of various weapon systems. So, the Indian military is already using land launchers for BrahMos missiles, and in addition, several missiles are armed with these missiles. In the near future, will begin operation of the rocket in the Air Force. The BrahMos Aerospace joint venture and related organizations do not stop working and have plans for the future, thanks to which in the coming years the arsenal of Indian armed forces can be replenished with new type of ammunition.