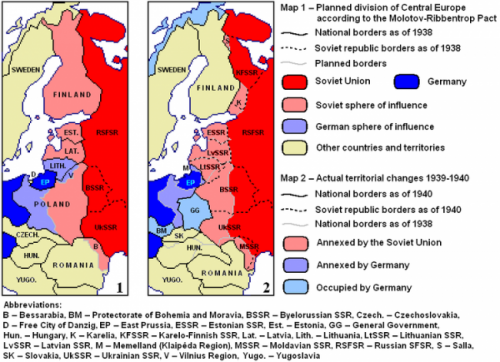 The non-aggression treaty concluded between the Soviet Union and Germany, the text of which we publish today, is a document of major importance, reflecting the consistent peace policy of the Soviet Union.

The foreign policy of the Soviet Union invariably proceeded from the desire to defend and preserve the cause of peace. In this policy, the USSR invariably sought to maintain and strengthen friendly and business ties with all those states that shared this position. In his report on the foreign policy of the Soviet Union, Comrade Stalin in his report at the XVIII Congress of the Party stated:
"We stand for peace and strengthen business ties with all countries, we stand and will continue to stand in this position, because these countries will maintain the same relations with the Soviet Union, because they will not try to violate the interests of our country."

The non-aggression pact signed by 23 on August, as indicated in its text, proceeds from these basic provisions of the 1926 agreement of the year, but at the same time contains further development of these provisions in order to strengthen peaceful relations between the two countries. Thus, Article I of the treaty states that both contracting parties undertake to refrain from any aggressive actions against each other, both separately and jointly with other powers.
Article II of the Treaty provides for the neutrality of the relevant contracting party in the event that the other party becomes the object of military action of a third power.

Undoubtedly, Article IV-I is of the greatest importance, which imposes on the contracting parties the obligation not to participate in any faction of the powers, which is directly or indirectly directed against another country.

The importance of Article V of the Treaty is determined by the fact that it provides for an exclusively peaceful method of settling all disputes and conflicts in the event that any arise between the two Contracting Parties.

The ten-year term of the treaty, established by Article VI, shows that both parties are showing a desire to secure peaceful relations between the two countries for a long period of time.

The content of each individual clause of the treaty, as well as the entire treaty as a whole, is permeated with a desire to avoid conflict, to strengthen peaceful and business relations between both states. There is no doubt that the nonaggression pact concluded eliminates the tension that existed in relations between the USSR and Germany.

However, the significance of the concluded agreement goes beyond the framework of settling relations only between the two contracting countries. It is concluded at a time when the international situation has reached a very great acuity and tension. The peace act, which is the non-aggression treaty between the USSR and Germany, will undoubtedly help alleviate tensions in the international situation, will undoubtedly help to defuse these tensions.

The feud between Germany and the USSR is ending. The difference in ideology and in the political system should not and cannot serve as an obstacle to the establishment of good-neighborly relations between the two countries. The friendship of the peoples of the USSR and Germany, driven into a dead end by the efforts of the enemies of Germany and the USSR, must henceforth obtain the necessary conditions for its development and prosperity.

USA, New York, 24 August 1939 (TASS).
The announcement of the Soviet-German non-aggression treaty caused exceptionally lively responses from the American press.
Famous American journalist Dorothy Thompson made a radio speech, stating that the non-aggression pact between the USSR and Germany represents a huge diplomatic victory for the Soviet Union. The international significance of the treaty is emphasized by Leland Stowe in the New York Herald Tribune, political analyst for the Associated Press Mackenzie, and several Washington correspondents in American newspapers.
Many correspondents believe that the conclusion of a treaty means a strong rebuff to Munich, who tried to incite Germany to the Soviet Union.
The New York Daily News newspaper writes that the Soviet-German non-aggression pact reduces the threat of war.
The newspaper notes that this treaty is beneficial for the United States, as it weakens the position of Japan. Thus, the newspaper writes, "indirectly, the Soviet-German treaty is beneficial for the United States, since Japan is our probable adversary."

England, London, 24 August 1939 (TASS).
The London newspapers reproduce, in the most prominent places, the report on the conclusion of the German-Soviet treaty and the text of the treaty itself.
The conclusion of the treaty gave a number of newspapers and politicians grounds for sharp criticism of Chamberlain’s policy. The observer of the Star newspaper writes: “Moscow believes that Chamberlain never thought of concluding a pact with Soviet Russia, that Chamberlain contented himself with the idea of ​​convening a confederation of five powers from which the Soviet Union would be excluded.”
"Manchester Guardian" notes that "the events of recent years have inspired the Soviet government a deep distrust of French and English politics."
The Daily Worker calls on the House of Commons to get Chamberlain to answer why he brought England to the eve of the war with his policies. The newspaper places in a prominent place the resolution of metalworkers of the Rosenside plant in Barking, which states: “We are delighted with the patience shown by the USSR in negotiations with the British government, and we consider the policy of the Soviet government to sign the non-aggression pact with Germany to be correct. We believe that this once again testifies to the power of the Soviet Union. ”

England, London, 25 August 1939 (TASS).
The English press continues to pay great attention to the non-aggression treaty between Germany and the USSR.
The newspaper "Yorkshire Post" writes about the "disappointment" of British leaders, caused by the conclusion of a non-aggression pact. At the same time, the newspaper acknowledges that the USSR had grounds for many suspicions, and cites evidence of the intensive backstage activities of British diplomacy (the newspaper recalls Hudson’s conversation with Woltat, the proposal to convene a conference without the USSR, etc.).

France, Paris, 24 August 1939 (TASS).
The French press pays great attention to the non-aggression treaty between the USSR and Germany. The newspaper "Tan" cites the contents of Pravda and Izvestia editorials on the treaty.
A number of newspapers close to official circles are trying to mislead French public opinion about the real substance and meaning of the contract. It is characteristic that the journals Journal de Debay, Tan and others, which were strenuously striving to push the Soviet Union against Germany, are now tweaking in every possible way to prove that the contract is unprofitable for both parties.
The newspapers close to the official circles are trying to shift responsibility onto the USSR for the failure of the Anglo-French-Soviet negotiations. Responding to these insinuations, the newspaper Sé Souar states that the British and French military missions that arrived in Moscow did not have the authority even to conclude agreements of a purely technical nature. The newspaper stresses that in London a rumor was strenuously circulating that Chamberlain, by sending a military mission to Moscow, wanted thereby to facilitate his own dissolution of parliament for the holidays.

France, Paris, 25 August 1939 (TASS).
Humanite and Sesouar newspapers receive hundreds of resolutions from social, cultural and trade union organizations endorsing the USSR’s peaceful policy. Newspapers publish among others a resolution of the association “Peace and Freedom Movements”, welcoming the great diplomatic success achieved by the Soviet Union. Similar resolutions were received from the Union of the Agricultural Youth of France, from some municipal councils and other organizations.

Bulgaria, Sofia, 27 August 1939 (TASS).
Since the publication of the announcement of the non-aggression treaty between Germany and the USSR, the Bulgarian press has paid great attention to this issue.
The government official "Dnes" in the August issue of 25 in an editorial article believes that normal relations between Germany and the USSR have always been a decisive factor in the preservation of European peace. The newspaper notes that the conclusion of a treaty plays a particularly large role for small neutral countries, which can now be sure of their future existence.

USA, New York, 27 August 1939 (TASS).
Articles continue to appear in the American press in connection with the conclusion of the Soviet-German non-aggression treaty.
The newspaper Baltimore Sen writes that the Soviet-German non-aggression treaty destroys the Anti-Comintern Pact.
London correspondent for the Chicago Daily News, Stonman, states that the very tense situation created in Europe is the result of the worst mistakes that British diplomacy has made over the years.

Germany, Berlin, 27 August 1939 (TASS).
The German press continues to pay great attention to the non-aggression treaty between Germany and the USSR.
Newspapers contain a number of economic articles devoted to the Soviet Union. Especially noteworthy is the extensive, on a whole page, article by the Moscow correspondent of the newspaper Frankfurter Zeitung - "The Political Geography of the Union of Soviet Socialist Republics".