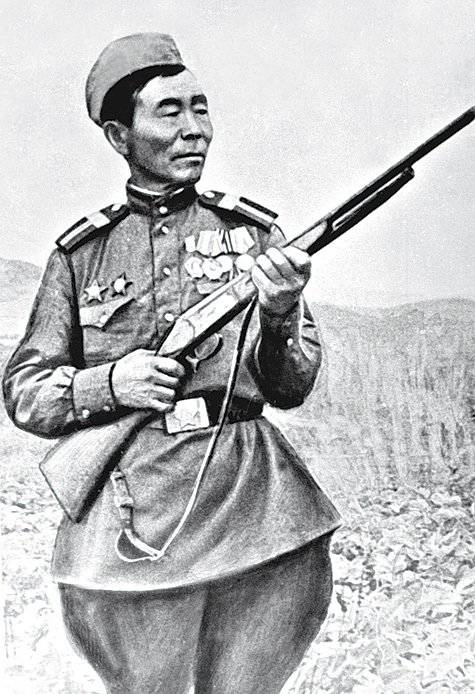 It is well known that many fighters who possess hunting skills differed on the fronts of the Great Patriotic War as skilled arrows and snipers. On the combat account of some of them dozens and hundreds of Nazis destroyed. One of them is Semyon Danilovich Nomokonov, with whom I had to meet more than once.

It was at the beginning of the 60s of the last century in Chita, where I worked in the newspaper of the Trans-Baikal Military District “At the fighting post”. I remember well familiarity with the famous sniper. The chairman of our QUO (a team of military hunters) correspondent for the information department Misha Nikolaev invited him to the editorial office. By the way, at least half of the editorial staff were avid hunters and fishermen. In the winter, we went to the roe deer hunting. In spring and autumn - on waterfowl. Fishing - all year round. Memories of the atmosphere of friendship and camaraderie that prevailed in our QUO warm the soul.

Misha led Semyon Danilovich to the office of the editor of the newspaper, Colonel Pyotr Dmitrievich Kazakov, who was one of the most active members of our hunting team.

Soon the editorial board announced a general fee. When we entered the editor's office, Semyon Danilovich got up, greeted each other by the hand. He was in blue riding breeches, in a green cloth tunic with the Order of Lenin and the Red Banner, two orders of the Red Star, and medals. He was provided with military uniform on the orders of the commander of the Trans-Baikal Military District, who in 1960 awarded him the title “Honorary Soldier of the Trans-Baikal Military District”. Semyon Danilovich was very proud of this title.

Many people, when it comes to the awards of the famous sniper, certainly have a question: why didn’t he receive the title of Hero of the Soviet Union, although he destroyed Hitler’s soldiers and officers for 360 during the war years?

And to explain why Semyon Danilovich was left without the highest reward, simply. The fact is that during the war years he often had to change the place of service. Nine times he was injured. After treatment in the medical battalions and hospitals due to natural modesty he went where he was ordered. In total, his track record includes five fronts, six regiments. Commanders did not have time to really look at him, to submit to the highest award.

There are few front-line soldiers who, from the first battles to the victory, have passed, and one can say - “plowed” in the infantry. Among them Nomokonov.

Our newspaper regularly published materials about Semen Danilovich. One of the publications quoted Mikhail Matusovsky's poems, published on November 3 on 1942 in the newspaper of the North-Western Front For the Homeland, and dedicated to Nomokonov:

Where am I from? Yes, it is clear from afar.
From those edges where Yermak fought.
Let's smoke or something, for the sake of meeting
In the carpenter? I am a carpenter ... Siberian ...

We asked the guest to remember his pre-war life, the most memorable front-line episodes. Having made a reservation that the speaker was of no great importance from him, that he feels more comfortable in the trenches or the taiga than in the offices, the front-line soldier nevertheless told a lot of interesting things.

Seeds' parents come from a small ancient Mongolian tribe of Hamnigans. “Hamnigan” in Buryat means “forest man”. They lived according to the customs and traditions of the Evenki, whose main occupation was hunting and fishing. The future sniper took up his gun at the age of seven, and at ten was already considered a real hunter. Among his trophies were squirrels, sables, hares and even Manchurian deer.

In the taiga Zabaikalsky village of Nizhny Stan of the Shilkinsky district of the Chita region, where Semyon built houses for people, in 1928, the hunting commune “Zarya novogo zhizni” was organized. Hunters-trappers changed their nomadic life to a settled one, moved from tents to wooden houses. So there was enough work for the carpenters. But as soon as the hunting season began, Semyon put aside the ax and took up the gun. By the age of sixteen he had become one of the best hunters in the commune. In addition to the mark of shooting, the components of Nomokonov's hunting art were tirelessness in the pursuit of the beast, the ability to unravel its fraudulent moves, and “read” the tracks. Like other hunters, Semyon could spend hours in the freezing cold waiting for prey in an ambush, for several days, be content with spending the night in the woods around the fire.

By the beginning of the war, Nomokonov was in his forty-first year. He went to the front as a volunteer. I got to the Kalinin front. That was the height of the battle of Moscow. At first, the unit’s commanders assigned auxiliary roles to almost the oldest soldier of far not heroic build: a bread-cutter in a field kitchen, an assistant chief of a clothing depot, and a member of a funeral team. At the next enemy raid aviation Nomokonov was wounded, got to the hospital. This is where his carpentry skills came in handy. The wounded said that the crutches he made for them were no worse than the factory ones. And then - the service in the medical battalion as a nurse. Perhaps no one would have heard of the sniper Nomokonov, but the case helped, On one of the autumn days of 1941, Semyon, taking the wounded out of the battlefield, saw that a German soldier was aiming in their direction from the enemy trench, two hundred meters away. Throwing up a rifle instantly, he fired. Our officer, watching what was happening with binoculars, then said that the fascist had fallen dead. On the recommendation of the commander of the medical battalion, the Transbaikalian was enrolled in a sniper platoon.

For a long time, Semen Danilovich smoked a pipe. He did not change this habit at the front. And the tube has become for him a kind of talisman. Returning from a position, he would sit by the stove, glow a red-hot piece of wire, and burn out intricate signs - crosses and dots on the tube. Co-workers knew what they meant: a point - a dead soldier, a cross - an officer. After some time, the old tube did not have enough space. Rescued front commander. After the duel, in which the Zabaykalets laid an experienced fascist sniper, the commander sent a gift of ivory to Semyon Danilovich as a gift, at which he continued to count the destroyed fascists.

"Sniper tube" - the so-called story about Nomokonov. Its author, the Chita writer Sergei Mikhailovich Zarubin, was often in our editorial office. Sometimes I came along with Semyon Danilovich, and each time we did not let them go for a long time. And once they came with a guy in a military uniform. It was the son of a front-line soldier Vladimir. Zarubin said that Nomokonov Jr., before being drafted into the army, was a skillful hunter, and in a military unit he was distinguished for his gun shooting.

In the book "Sniper Tube" you can find many interesting episodes. Here is one of them.

... It happened in the winter in Valdai. Semyon chose a fighting position in the neutral zone. A few days ago, he noticed in the German positions a group of high-ranking officers. And I could have struck not one of them, but the hunting sense suggested that a more important goal might appear here ... Once a German came out of the dugout in an overcoat with a fur collar. Around him, the others fidgeted obsequiously. There was no doubt: an important bird. Nomokonov shot. The fascist fell. Later it turned out from the testimony of the prisoners that this was a general from Berlin. The prisoners also showed that Nomokonov in the German headquarters and the trenches was called the Siberian shaman, and a large prize was awarded for his head.

“When I learned that the fascists called me a Siberian shaman, I even became proud,” said Semyon Danilovich at a meeting in the editorial office. - It can be seen, I firmly annoyed them ... But in general I had to deal with witchcraft in order to trick the enemy.

At the fighting position, he grabbed various "amulets" - strings, horns, shards of a mirror. He wore a footwear woven from a horsehair, which he called rodents, on his feet. With their help, he moved silently through the forest. He was an unsurpassed master of disguise and, while hunting fascists, used all sorts of tricks. He teased them with mirrors, lured them to a shot, tugged at the helmets worn on sticks.

Nomokonov ended his combat career on the spurs of the Great Khingan, contributing to the defeat of militarist Japan. In the certificate, signed by the commander of the 221 of the Mariupol, Khingan Red Banner Order of the Suvorov Rifle Division, Major General V.N. Kushnarenko says: “In August 1945, acting on the Trans-Baikal Front, sniper S.D. Nomokonov destroyed 8 soldiers and officers of the Kwantung Army. By order of the front commander R.L. Malinovsky S.D. Nomokonov, as a taiga hunter, was given a personalized sniper rifle No. 24-638, binoculars and a horse. Please allow the hero of the war to freely cross the border. ”

The rifle under this number is now on display in the Chita Regional Museum of Local Lore.

And now back to the wording from the dictionary: "The sniper is a specially trained shooter." As we see, S.D. Nomokonov nobody specifically taught. His teachers were hunting, forest, ancestral traditions. It would be unforgivable to forget today about the military-applied meaning of hunting.

It is very important that this is remembered in the Military Hunting Society, which will celebrate its 90th anniversary in October of this year.