6 September 2013
20
In the late fifties and early sixties in the USSR, designers Dvoryaninov and Shiryayev carried out work on subcaliber swept ammunition. In 1961, Shiryayev created an experimental machine gun AO-27 for these munitions. 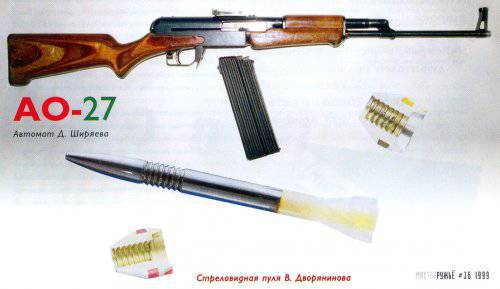 The automatic machine AO-27 designed by DI Shiryaev is an integral part of the experimental complex "weapon - cartridge with arrow-shaped bullet ", developed at SRI-61 (later - TsNIITochMash) since 1960. By that time, a number of studies aimed at improving the effectiveness of the AK-47 when firing from unstable positions (standing and from the knee) were completed. As a result, it was found that the most acceptable way to solve this problem is to reduce the recoil momentum, in order to maintain and even increase the range of a direct shot, it was necessary to reduce the caliber.

To a similar conclusion previously came to the United States, where the cartridge and automatic caliber 5,56 mm were developed. The creation of a domestic analogue of such a cartridge was initiated by the head of the cartridge direction of the SRI-61, V.M. Sabelnikov. As an alternative to the aviation armaments department of the scientific research institute-61, it was proposed to simultaneously check the possibility of using for the same purpose a cartridge with a sabotite arrow-shaped bullet. The hope for success was given by the fact that at that time domestic arrow-shaped armor-piercing sub-caliber shells with separating pallets to the 100-mm anti-tank gun T-12 "Rapier" had already been developed. The design of such ammunition, i.e. a cartridge with a feathered subcaliber arrow-shaped bullet and a detachable leading two-sector tray for automatic weapons, was developed in 1960 and protected by copyright certificate N 22527 with priority from 1 June 1960.

The authors of this invention are V.P. Gryazev, P.A. Fadeev, A.G. Shipunov and D.I. Shiryaev. The patron was assigned an index of OPS (feathered sub-caliber rifle). The AO-27 machine gun for these ammunition was developed at the start of the 1961 of the year. The ammunition OPS and automatic machine AO-27 for him represent the world's first rifle complex of this kind. Later, the Americans tried to realize this idea, but their long-term efforts in this direction were not crowned with success. Automatic equipment AO-27 of vapor type with removal of powder gases through a side opening in the wall of the barrel. As a barrel, regular blanks of 7,62 mm caliber were used, in which regular sections were cut, but more gentle. The rotation of the bullet contributed to a clear separation of the sectors of the pallets leading the bullet along the barrel. In addition, during the rotation of an aerodynamically stabilized bullet, the eccentricity of the forces acting on it averaged and, consequently, the scatter of hits decreased. The bolt is rotary, with two locking projections.

The stem of the bolt is structurally made together with the rod, ending with a gas piston. In the hollow piston rod of the gas piston is placed a return spring. The impact mechanism of a striker type with a long stroke (almost equal to the stroke of the shutter) of the striker. This was done in order to increase the time cycle of the automation to reduce the rate of fire. The trigger mechanism of the simplest type, consisting of a trigger, rotary sear, self-timer and uncoupler. The flag-type fuse-translator is located on the trigger guard behind the trigger + com, by analogy with self-loading rifles SVT. Aim devices consist of a pillar and front sight.

In the first version of the machine, the pillar was diopter and the front sight was located on the gas chamber. When developing the complex on the recommendation of the military, the sight was replaced with a conventional adjustable sector, and the adjustable front sight was transferred to the muzzle of the barrel. Shooting is performed from the so-called front sear, i.e. with movable parts in the front position. According to the testing reports of the complex at the stage of the main designer, its advantage over the AK-47 was overwhelming. In particular, the range of the direct shot of the machine was 530 meters against the 356 AK-47 and 437 rifle rifles.

In this case, the recoil pulses were 0,5 for AO-27, 0,78 for AK-47 and 1,24 kgf for a rifle. When shooting at a distance of 1000 m, the trajectory heights were respectively 3, 10.5 and 6 meters. Large initial bullet speed OPS cartridge (1060 m / s) and lateral load gave the machine AO-27 a significant advantage in the penetration of such obstacles as trench ripples. Significantly less was the dispersion of the bullets of the AO-27 machine compared to the AK-47 when firing in short bursts from a standing position. But due to the weak stopping power and the high cost of the cartridge, the topic was left in the category of R & D. 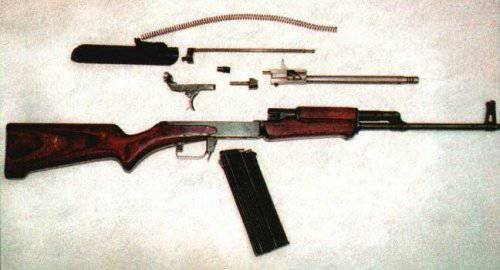 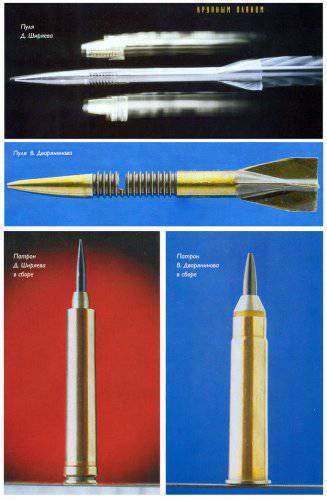