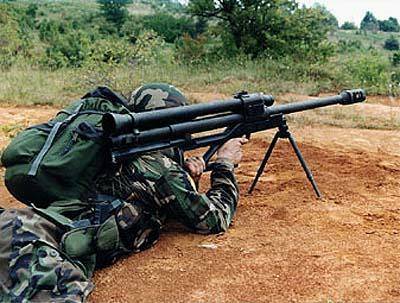 Hand-gun - this is how the full name “Rucni Top” of a large-caliber RT-20 Croatian rifle is deciphered. This mini-monster was created in the middle of 1990, during the Serb - Croat conflict after the collapse of the allied Yugoslavia. The main purpose of the RT-20 was the fight against equipment, including lightly armored. RT-20 is manufactured by RH-Alan and is in service with the Croatian army.


Large-caliber sniper rifle RT-20 - this is probably one of the most interesting sniper samples weapons. Let's start with the fact that this rifle is one of the most powerful mass-produced ones, while the rest of the 20 caliber weapons of millimeters are based on a weaker cartridge, and those rifles whose caliber exceeds 2 centimeters are literally made of pieces. The production of this rifle fell on the time of the Serbian-Croatian conflict precisely at that time it took a weapon that could penetrate all types of personal body armor at long distances, and also effectively deal with enemy snipers at distances inaccessible to their weapons. This model is available rifle Croatian company RH-Alan. Very well gives the characteristic rifle its name Rucni Top? Which translates as a hand gun, and why it is so called below.

As with any weapon in this rifle, the base is ammunition. The RT-20 is a twenty millimeter projectile (20x110) from the Hispano Suiza HS 404 anti-aircraft gun. At the moment, the release of high-explosive, armor-piercing and armor-piercing incendiary ammunition has been adjusted, the weight of such a cartridge-cartridge is about 130 grams, and the powder charge accelerates it to 830 meters per second. In order to tentatively imagine what kind of energy a given projectile can draw an analogy with the NATO standard 12,7X99 cartridge, the recoil created by firing the 20х110 cartridge is four times the return of the 12,7 caliber cartridge, of course, the weight of the weapon and so on also plays a role, but An example of such a comparison is quite suitable.

If we compare with the cartridges 20x82 from the German aviation the guns that are used in the large-caliber rifle TEC-20, the power of the cartridge 20x110 is twice as large. In other words, the energy released by the cartridge during the shot is very large, and here we must pay tribute to the skill of the gunsmiths, who found a way to control it. The first thing that comes to mind when comparing 20x110 ammunition with other ammunition is the issue of giving back weapons. If in anti-aircraft guns this question was significant insofar as since no one had the idea to shoot it without a machine gun, then in manual weapons this question is more relevant than ever. Of course, in order to dampen recoil, a massive and effective muzzle recoil compensator is required, however we know that the most effective of them can absorb 30-35 percent, and we should not forget that the muzzle recoil compensator sends powder gases under angle to the arrow, from which the ears of the arrow, to put it mildly, do not feel comfortable.

The RT-20 large-caliber sniper rifle has a massive three-chamber muzzle brake, and, complete with a weapon, you can find huge headphones that look more like a torture tool used by the Inquisition in the Middle Ages, because they squeeze the skull box very tightly. But if you choose between contusion and such inconvenience, the choice will naturally fall on the latter. But this is all quite expected from the weapon, but the pipe located above the rifle can cause a number of questions. The fact is that to compensate for the recoil of the rifle used jet thrust created by the powder gases. A series of holes are made in the barrel of the rifle through which the powder gases enter this so-called reactive system, as a result of which the rifle pushes forward the jet thrust forward and the recoil pushes it back, and both forces cancel each other out.

Such a recoil compensation system could not only reduce it to zero, but even make the weapon move forward, however, it should be borne in mind that the powder gases entering the jet system could usefully work, accelerating the bullet in the barrel, therefore, completely remove the recoil of the weapon the best way to use the system, as it takes energy from the bullet in the barrel, but to reduce the percentage on 40-50 without a significant reduction in the energy of the bullet is quite realistic. Thus, there remains the order of 20-30 percent recoil, which will be painfully perceived by the shooter when fired. In order to reduce them on the butt of the weapon, the butt plate-accordion is placed; at the moment of the shot, a small part of the powder gases gets into it and causes it to expand, thereby compensating the recoil, as a result the shot from the “hand gun” does not cause more inconvenience than we say a shot 12,7 caliber rifle weighing 10 kilogram.

Naturally, such a system of recoil damping has a number of negative sides, firstly, it is a flame escaping from a reactive recoil compensation system. And the point here is not so much that you cannot shoot a rifle in a closed room, or you need to look around every time, is it not worth someone behind your back so as not to fry your comrade. The main problem of such a system is that when fired, the position of the sniper immediately becomes open, and even if the enemy does not see the flash when fired, he will easily determine where the sniper is on the smoke trail. And even if all this can be skipped, it is enough to look at the terrain through a night-vision device based on infrared radiation to see where the sniper is, as the tube of the reactive recoil compensation system will glow brightly and clearly due to the high temperature. Unfortunately, the pipe itself, like the rifle, is not covered with non-conductive heat paint, on the other hand, the effective range of the weapon is about two thousand meters, which somewhat mitigates this drawback.

Arranged weapons according to the bullpup scheme, which reduces its size, but in this case imposes a number of drawbacks. So if other rifles can be fully serviced by one person, then at least two people need to be fired from this weapon, this is due to the fact that the rifle bolt is far behind the pistol grip, and in order to reload the shooter it is necessary to remove the weapon from the shoulder, move relative to the rifle back and make another lot of manipulations that not only unmask him, but also reduce the rate of fire. While the second person from the sniper calculation can spend on reloading less than 20 seconds. 20 seconds seem to be quite a long period of time for recharging, but here it must be borne in mind that after the shot at least 5-10 seconds should pass only after that it will be possible to remove the empty sleeve. Open sights RT-20 does not have, which is understandable. The optical sight is mounted on the bar installed at the junction of the barrel and the reactive recoil compensation system on the left side. The rifle has a massive bipod fixed in the front of the forearm, which can be adjusted in height, given the weight of the weapon and the recoil force, shooting from the hands is not only contraindicated, but simply impossible. 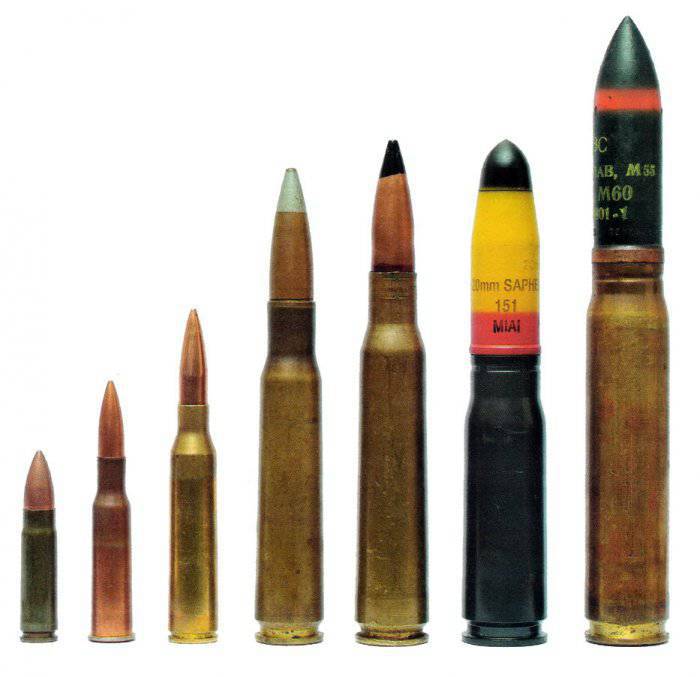 The RT-20 large-caliber sniper rifle is a formidable weapon both externally and in practice, and it poses a threat to lightly armored vehicles and means of location and communication. This weapon has no equal among other sniper rifles, both in power and weight, so the rifle itself can be easily disassembled into two modules, each weighing about 10 kilograms, which are carried in shoulder bags by sniper calculation.