Most Germans are against the sale of Saudi tanks 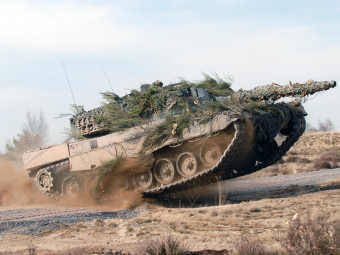 Most German citizens oppose the sale tanks Leopard Saudi Arabia. This is evidenced by a survey conducted by the Forsa Public Opinion Research Institute on the instructions of the weekly Der Stern, reports DAPD. Dissatisfaction with possible supplies was expressed by more than two-thirds of respondents - 73 percent. At the same time, 22 percent consider such a contract acceptable. 5 percent of respondents have no opinion on this issue.


The greatest number of opponents of a possible deal among supporters of the Soyuz-90 / party is green - 86 percent. They are followed by supporters of the SPD (77 percent) and “left” (76 percent). However, the voters who voted for the CDU party (59 percent) and the FDP (69 percent) also expressed a negative attitude towards supplies. In total, more than one thousand citizens were polled.

Meanwhile, the director of the Hamburg Institute for Studies of Peace and Security Policy, Michael Brzoska, called for greater transparency in the field of export. weapons. “Democratic control is not only possible, but necessary,” said an expert at the Saarbrücker Zeitung newspaper. In the USA, for example, all transactions worth more than 50 million dollars are subject to approval in Congress. A special parliamentary commission has been set up in the UK, receiving full information on arms exports. “Germany could focus on these countries,” says Michael Brzoska.

In his opinion, strict measures aimed at ensuring the secrecy of arms supplies do not make sense. Despite all the efforts, information leaks out and gets into the media. This is also due to the fact that firms producing weapons are interested in advertising their products. In addition, at military parades, it is clearly seen what types of weapons have individual states. This fully applies to Saudi Arabia - so far German tanks were not armed with its army, the expert noted.

We are in Yandex Zen
The best main battle tanks of the world 2012 of the year
Greece: on corruption in weapons programs
Add a comment
Information
Dear reader, to leave comments on the publication, you must to register.