Ebola fever turns into a threat of international importance

August 13 2014
38
Ebola haemorrhagic fever is gradually becoming a threat of international significance. While the epidemic is developing according to all the canons of catastrophe films about deadly viruses or as part of one of the scenarios of the popular multiplatform game Plague Inc. The Ebola fever in West Africa 2014 has already become the most ambitious in stories, while stopping the spread of the disease fails. The number of Ebola victims has already reached 1013 people, the total number of cases was 1848 people. Thus, mortality at the moment reaches 55% of all cases of the disease. It is reported by Agence France-Presse, with reference to the World Health Organization (WHO).


Only on 3 of the day, from 7 to 9 in August, 52 people died in three countries in Africa - Liberia, Sierra Leone and Guinea. Previously, never outbreaks of the disease did not cover such a number of people and were not accompanied by so many deaths. For example, in the 1976 year, when fever was first diagnosed in Sudan and Zaire (now the Democratic Republic of the Congo), the mortality rate was higher, so in Zaire 318 people died from 280 cases, in Sudan 284 people died from 151 patients. However, never before 2014, fever killed more than 500 in one year, but now thousands have died.

In this case, victims of Ebola already become citizens of other states, including doctors who are trying to help in the fight against the spread of the virus. So, according to media reports that refer to Agence France-Presse, 8 Chinese were placed in quarantine in Sierra Leone because of suspicion of the Ebola virus. Citizens of the People's Republic of China were medical workers who provided care for Ebola patients in this African country. In addition, even the 24 nurses who worked at the military hospital in Freetown were hospitalized with suspicion of the disease. 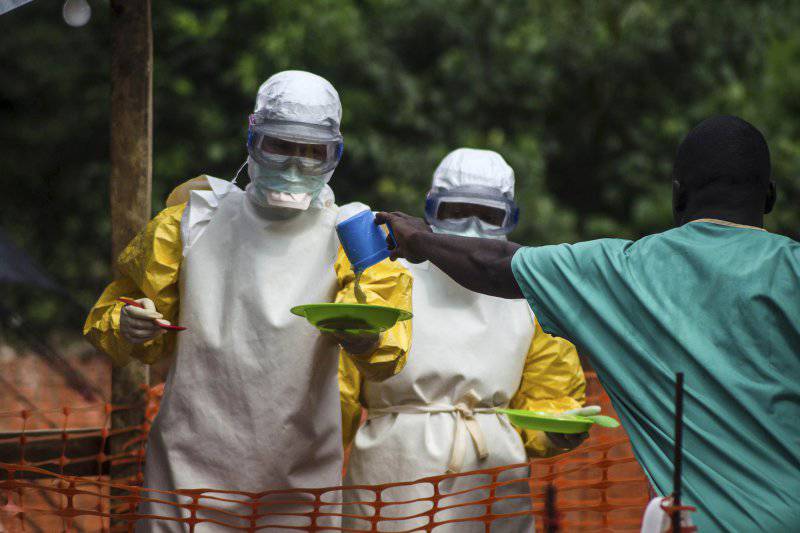 Among the victims of Ebola, the first European appeared. They became the Spanish priest Miguel Pajares, who became infected while in Liberia. The 75-year-old priest died in Madrid at the Carlos III hospital. His death was reported by the newspaper El Mundo. 75-year-old Catholic priest was brought home by plane of the Spanish Air Force 7 August. Together with him, a nun Juliana Bonoa Boe flew to Madrid, to whom the virus was subsequently not found. At the same time, Spanish physicians initially assessed the state of Pakhares as stable and satisfactory, but then he suddenly became worse. Miguel Pajares has spent 50 years in Africa, all these years he has been involved in missionary work. During an outbreak of Ebola in 2014, he helped patients in the Catholic hospital in Monrovia (the capital of Liberia).

Today, the countries of the planet are no longer isolated from each other, we live in an open world. Every week hundreds of airplanes fly from West Africa. Some of them may very well take people who are carriers of the virus to their homes. For example, in Serbia, 6 people were placed in the quarantine zone for a period of 14 days, who returned to the country from West Africa. In Turkey, 12 August was quarantined by a woman from Nigeria who arrived in the country as a tourist, her diagnosis has not yet been confirmed.

Today, the Ebola virus is one of the worst subcellular killers on the planet. Mortality during some outbreaks of the virus reached 90%. This virus is even less demanding than HIV and does not have the so-called "asymptomatic phase." It is for this reason that the "jungle killer" deals with his victims in just a few weeks. Surviving with such a high mortality rate is real luck or even a miracle, especially in those areas where the fever has been rampant for quite some time. Carriers of the virus in nature are rodents and monkeys that live near human habitation. At the same time, bats are considered the main carrier. 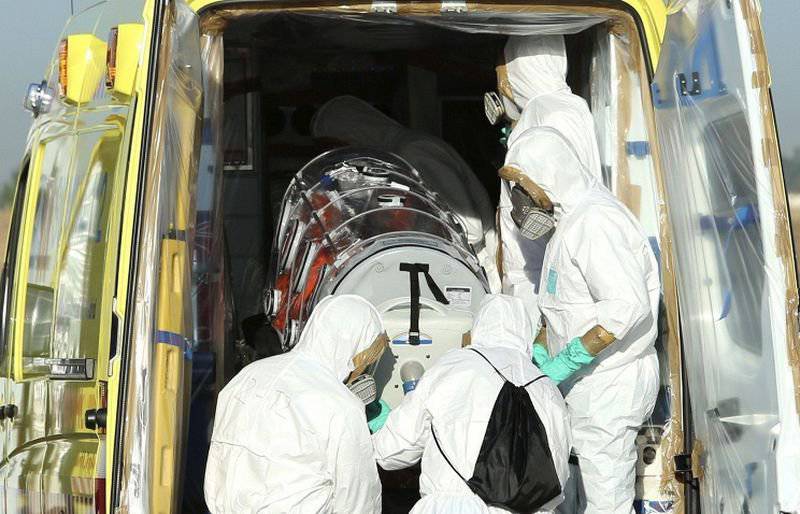 Authorities have already declared a state of emergency in Sierra Leone and Liberia. In Nigeria and Guinea, doctors claim inability to control the spread of the disease. Earlier it was reported that the fever reached Canada, but the fact of infection of a Canadian citizen who returned from Africa was not confirmed. However, the current situation forced WHO to declare the Ebola virus an emergency event at an emergency meeting, which is a threat to all of humanity. It has become an international threat, today not only doctors but also the military are focused on it.

At the moment, bats are recognized as the main distributors of this dangerous disease. People become infected either through direct contact with them, or by eating the meat of bats for food. Dr. Jonathan Epstein Associate Vice President of the Eco Health Alliance notes that the transmission of such viruses from bats and other animals to humans is carried out by expanding the scope of human activity in agricultural practice and land use. As a result, people, willy-nilly or forced, are forced to enter into much closer contact with wild animals. In addition to the above, bats are a real delicacy in the central and western parts of the African continent. Often they are just smoked over a fire. Also cooked from the bats soup. Having learned about the danger that these animals can pose, the Ministry of Health of Guinea has already banned eating and selling bats.

In addition, various monkeys - chimpanzees, gorillas, and also antelope-duikers can act as carriers of infection. Much worse, the virus can also be transmitted simply from person to person. Patients with the Ebola virus infect their relatives and doctors who care for them. Reports of an epidemic in Africa itself have already frightened residents so much that many consciously try to avoid large crowds of people, and some are even afraid to shake hands at a meeting. 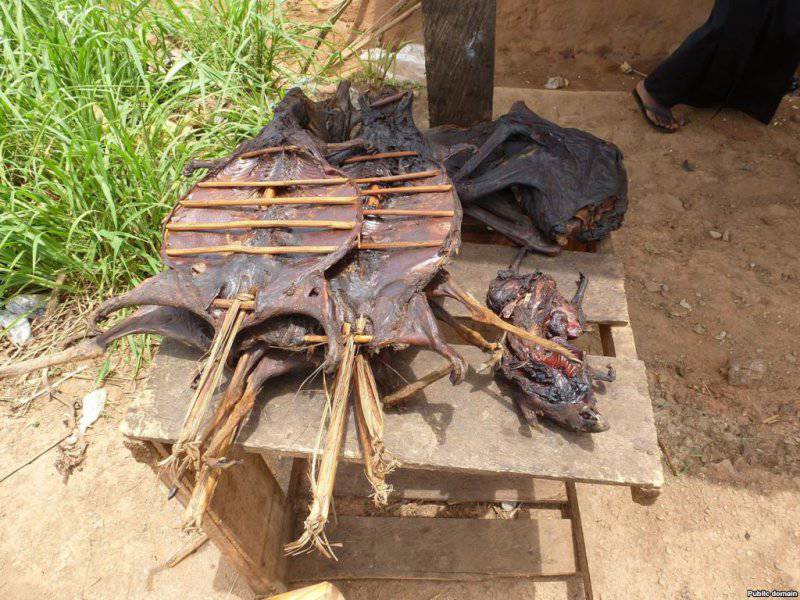 Not only live animals or people can be carriers of the virus, but also dead ones. The virus can be released from patients for three weeks. African media have already written many times about cases where relatives were infected with Ebola during a funeral, when direct contact with the bodies of deceased people takes place. After 7 August 2014, the government of Liberia imposed a state of emergency in the country due to the spread of a dangerous virus, President Ellen Johnson-Sirleaf made a televised address to the nation. In a statement, she noted: "Ignorance and poverty, as well as ingrained cultural and religious traditions continue to contribute to the spread of a deadly disease."

Vaccine against the virus

On Tuesday, 12 August, Reuters reported that WHO and the United States approved the delivery of an experimental Ebola vaccine to Liberia, which began an epidemic in West Africa in early February 2014. According to the agency, US President Barack Obama, together with the Food and Drug Administration, approved a request from a Liberian colleague, Ellen Johnson-Sirleaf, for the transfer of experimental whey to the country. This drug is expected to be delivered to West Africa very soon, this week.

World Health Organization Director-General Margaret Chan has already authorized the delivery of an additional batch of experimental vaccine against a deadly virus. At the same time, Margaret noted that this drug will be sent for treatment against the virus of Liberian doctors. According to the head of WHO, it is already possible to say about the unprecedented nature of the development of the disease, while further it will only get worse. For this reason, the international community must unite its efforts in order to take control of the situation as soon as possible. 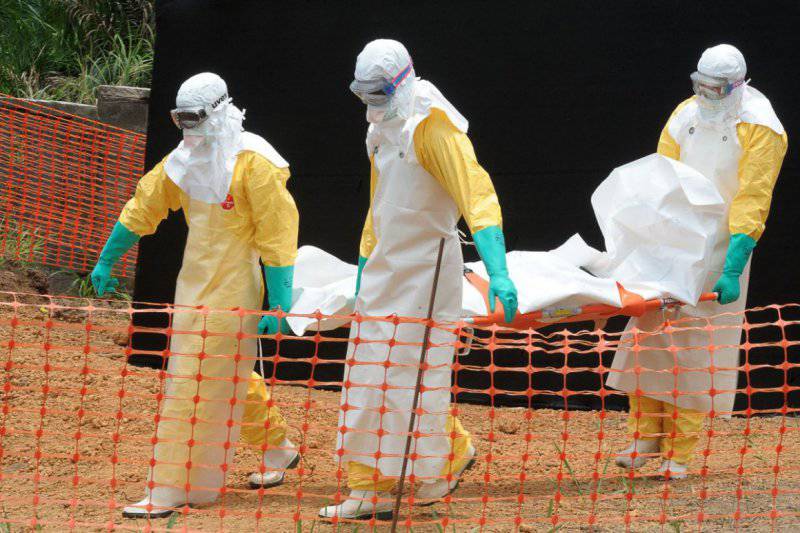 At the same time, Russian experts believe that it is premature to talk about the creation of a vaccine against the virus. According to them, at present all the statements of American doctors are not yet supported by sufficiently serious clinical studies, as well as observations of a new strain of the virus, which, apparently, have become widespread. According to Russian experts, so far the statements of American doctors about creating a successful vaccine are more like an excellent commercial move. Indeed, only experimental drugs currently exist, so Ebola fever is still considered incurable.

Doctor of Biological Sciences Sergey Netesov notes: “At the present time, apparently, the sanitary version of the vaccine is being tested, which is being tested only in the first phase. If this phase passes normally, but this will become known in a few months, then it will be possible to experiment with a group of volunteers. And here everything is more complicated, since the first phase could pass on US citizens, and the second should be carried out already on people with an increased risk of infection, that is, on Africans. ”

The experience of research in this area has the Science Center. Ivanovsky is one of the most closed virological institutes in the Russian Federation. Russian scientists have been conducting their research on this virus for a long time. At the scientific center, hundreds of the most dangerous viruses on Earth, as well as their many strains, are stored in special freezers at a temperature of –70 degrees Celsius. Currently, experts at the Moscow Center are studying Ebola, also working on a universal vaccine. 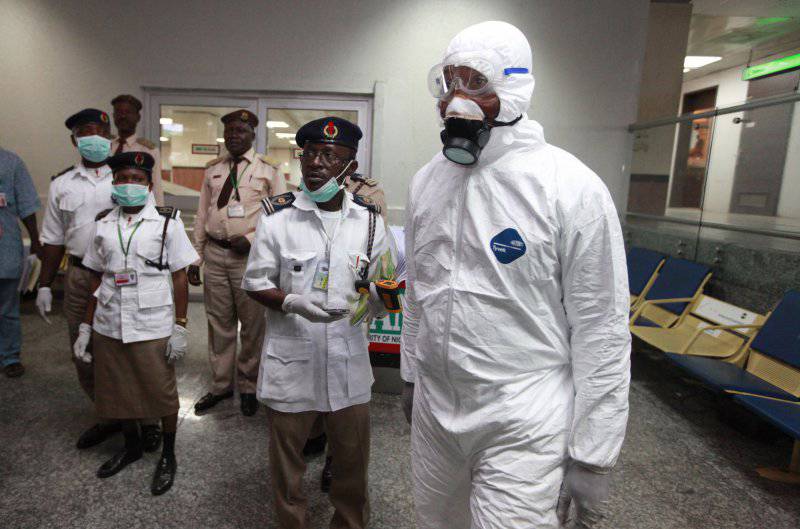 In addition to the Moscow Institute, another closed research center, Vektor from Novosibirsk, is participating in the vaccine creation program. However, several Russian researchers are already in Guinea. Among them is Mikhail Schelkanov, head of the virus ecology laboratory. According Schelkanova, currently conducted research on the creation of the Russian vaccine. In an interview with Vesta journalists, he noted that the vaccine had quite successfully passed the 5 tests. According to him, the development is entering the final stage, but it is very difficult to say how long the tests will last.

The spread of the disease in Russia seems unlikely. According to the director of the Ivanovskyi Research Institute of Virology, Pyotr Deryabin, there are no optimal conditions for the circulation of the Ebola virus in Russia. The bats that support the virus all the time are adequate hosts for the virus on the African continent, there are simply no such carriers in Russia. In addition, according to specialists, the standard of living in our country is elementary higher than on the African continent, medicine is better developed in Russia, the system of observation of the situation works, and the rules of personal hygiene are observed.

In many ways, the creation of a vaccine was hampered by the fact that its development must be economically justified. At the same time, the spread of Ebola fever is local in nature, which is limited to the natural habitat of the host virus. However, the situation has now changed, the fever has spread to the territory of several states of West Africa, which immediately led to serious problems and intensified work on the creation of a vaccine throughout the world.

We are in Yandex Zen
Influenza in Russia. What threatens public health and why not panic?
Virus or oil?
38 comments
Information
Dear reader, to leave comments on the publication, you must to register.