August 13 2014
20
We continue the review of weapons of Great Britain. It will be considered light multipurpose missile (Lightweight Multirole Missile) or LMM, which, in accordance with the requirements for future light guided weapons of the class surface-air (Future Surface to Air Guided Weapon (Light), FASGW (L) will be equipped with helicopters of the Royal Navy Wildcat.

The LMM is a relatively new rocket, although it is largely based on the older High Velocity Missile / Starstreak rocket family. Starstreak was born out of the requirements for a short-range air defense system, portable and vehicle-mounted. The system originates in the designs of MANPADS Blowpipe and Javelin. Starstreak is an extremely complex system; is launched from the plant, after the first stage has been developed, the rocket accelerates to high speed in Mach 3,5. After working out the second stage, three submunitions rush towards the target. 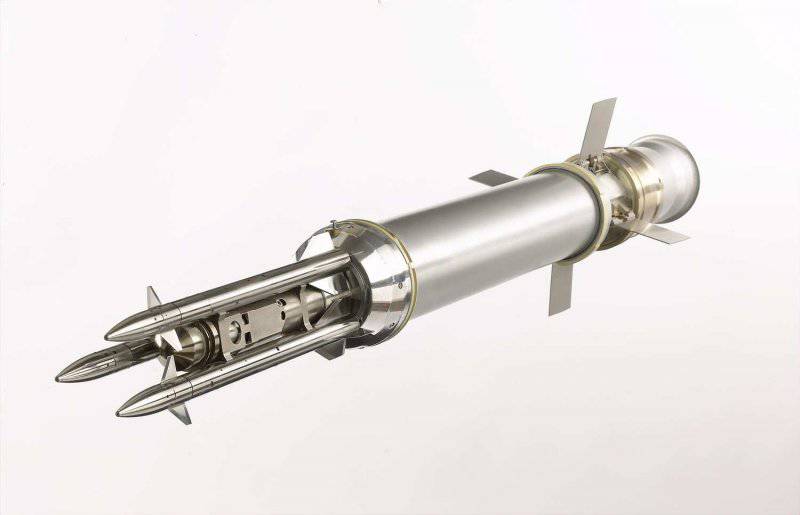 Each “dart” submunition is motionless, but it is also controlled and equipped with a time-delay fuse that actuates the warhead already inside the target.


Anti-aircraft missile system Starstreak. It's bad to be an enemy plane!

The complex has been tested on a number of platforms, for example, on helicopters and naval installations.

The marine launcher is called Seastreak. She appeared as a result of the British Royal program fleet from 1994 under the name of Antiaircraft weapons of the nearest line (Inner Layer Defense System, ILDS). Other naval air defense systems have four and six round launchers mounted on the platform. 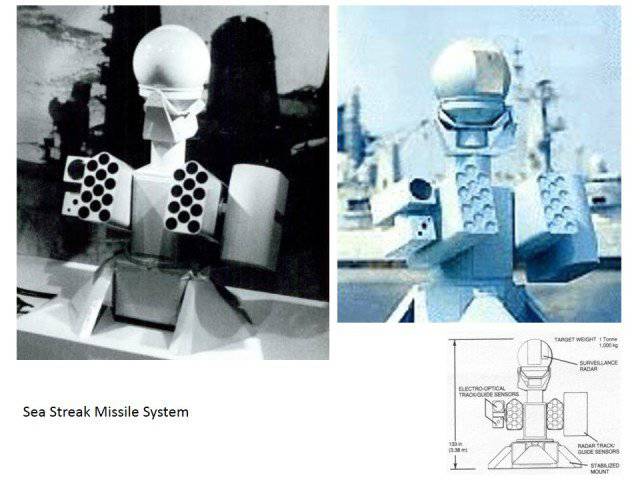 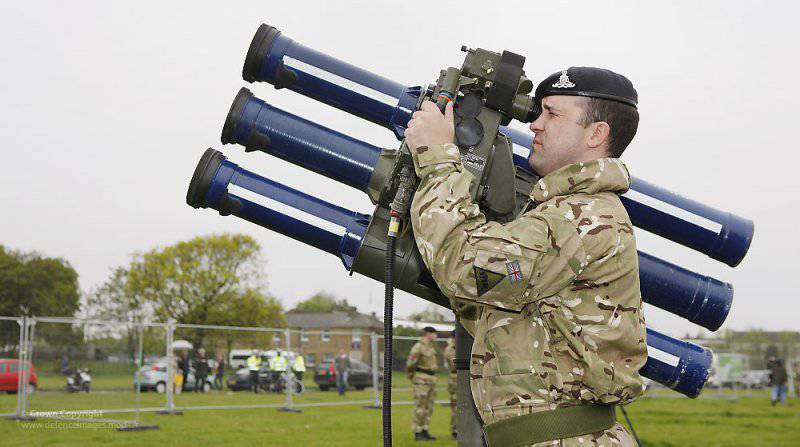 A soldier serves the Starstreak HVM High Velocity Missile System during the Olympic Guardian exercises in London in 2012. 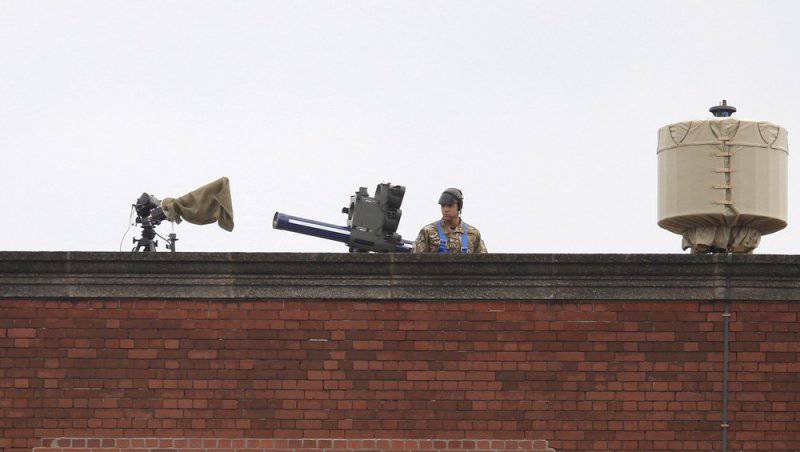 Soldier on duty next to anti-aircraft rocket battery in Olympic Park in Stratford, East London

In the 2009 year, as part of an air defense project (Air Defense Availability Project, ADAPT The UK Department of Defense and Thales have contracted an HVM / Starstreak to be commissioned in 2020. This contract also includes provisions for a new fire control system, a target tracking system and a platform for the future LMM.

Starstreak / HVM is not a light multipurpose rocket (LMM), more about HVM Thales and the British Army here.

In 2008, the FASGW (L) requirements of the Royal Navy were published to counter the threats of high-speed coastal boats (Fast Inshore Attack Craft, FIAC). Although it is unlikely that individual high-speed coastal boats armed with missiles or RPGs are capable of sinking a large surface ship. The mosquito fleet of such boats, in turn, can cause significant damage to the ship.

Article "Iranian Navy: from guerrilla war to modern naval strategy", published in 2009 by the US Naval Intelligence Agency, was perceived by many as a turning point in the West’s awareness of modern naval threats, but the Royal Navy had already begun work in this direction and identified a number of requirements, one of which is FASGW (L).

In this regard, helicopters will continue to provide protection for ships, but instead of increasing the range and large systems such as Sea Skua, smaller missiles with absolute accuracy will be required that could be applied subject to the limitations of the Rules of Engagement rules.

12,7 mm FN Herstal M3M HMG and thermal sight DRS were also presented to improve the protection of the forces and provide an element of the “metered response”.

In May 2011, the UK Department of Defense entered into a contract with Thales for "development, qualification and initial production," including the manufacture of 1000 laser-induced missiles.

Released in 2011, Thales’s press release includes the following paragraph:
Thales. The UK and the UK Department of Defense announced today an innovative approach to concluding a contract in accordance with the principles of the program Team Complex Weapons (TCW). Both sides agreed to redistribute previously received budgets in order to facilitate full-scale design, mass production and adoption by the British forces of light multi-purpose missiles.

Einstein's intelligence is needed to understand what they mean by that.

The ADAPT contract was modified and used to initiate LMM development, i.e. at the expense of HVM. Or, in other words, the desire of the Navy to get a rocket capable of withstanding the fleet mosquito fleet turned out to be more important than the army’s desire to have an air defense system.

Perhaps the incident with HMS Cornwall dispelled doubts on this issue.

Qualification took place in 2013 year, and production will begin in 2014 year (if it has not already started), adoption is expected in 2015 year, which corresponds to the program Wildcat.

The rocket is very slim and aerodynamically efficient due to the lack of the need to carry a cumulative charge warhead and, accordingly, no need for a large rocket diameter. This allows you to achieve a rather impressive range in 6-8 km with a minimum range of only 400 meters, which is comparable to guided missiles. The low speed of the 1,5 Mach also contributes to a greater missile range, especially compared to the HVM, some components of which were used to create the LMM.

A thirteen-kilogram rocket is relatively light, of course, much lighter than the next category of air-to-surface missiles, the fifty-kilogram Hellfire / Brimstone. The insensitive warhead is relatively simple, 3 kg of explosives / shrapnel and laser fuse, which allows the use of a rocket against targets made from small amounts of metal, such as inflatable and semi-inflatable boats. For comparison: the Hellfire warhead weighs 9 kg, and the Javelin weighs 8,4 kg.

The laser beam guidance system used was taken from the HVM / Starstreak. It is simple, it is difficult to fight it, it is suitable for the marine environment and is cheap, however it is not without flaws. For example, the simultaneous attack of several targets is not possible.

Reasonable compromise in order to get a working system with a limited budget.

As with Brimstone, the number of LMMs planned for the UK service is currently defined and very limited. Missiles are integrated into the Navy helicopters Wildcat and somewhere else. Different LMM configurations were demonstrated on the Wildcat pylons in packages for 7 and 5 rockets. 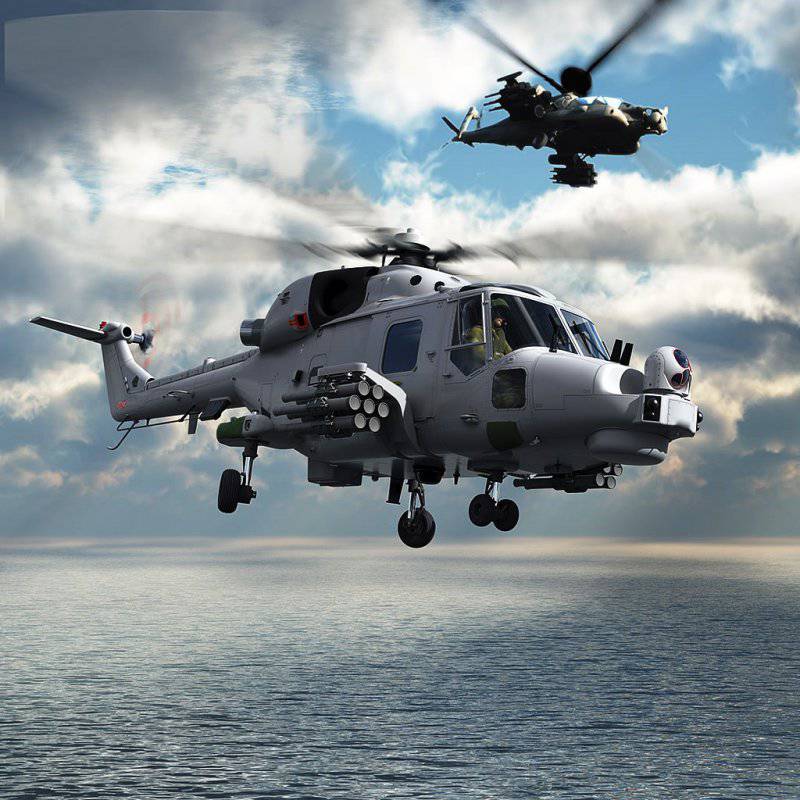 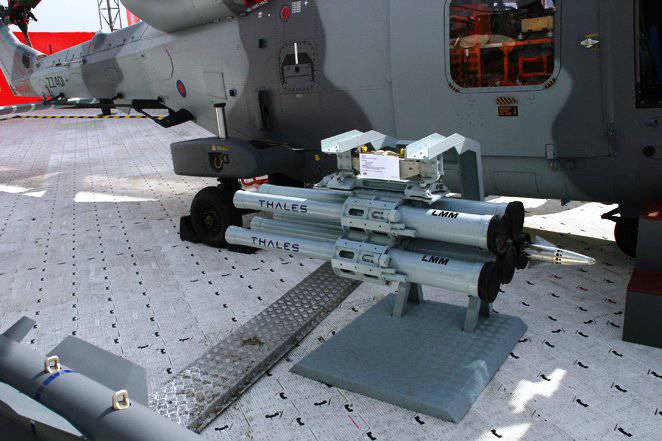 How many missiles will be in the launcher, it will become clear when they go into service, but the version with 5-th missiles is more and more often caught the eye recently.

There is no doubt that attempts are being made to export missiles, but these attempts are hampered by the limited number of missiles planned for use in their homeland, i.e. In Great Britain. Is it possible to use them in another place?

Undoubtedly, army helicopters can become an obvious platform for deploying LMM aviation Wildcat and Apache AH-1. However, it should be noted that until the future of the Apache fleet is decided, taking into account the possible application of elements of the American modernization of Block III, which include additional costs, and LMM may remain on the list "it would not hurt."

To be even more cynical, a more flexible and better armed Wildcat is not exactly what Apache fans wanted. Especially in these difficult financial times, when those who have a wallet in their hands, may ask what Apache will have this, which Wildcat does not have. It would be nice if the LMM rocket was on both helicopters: Wildcat and Apache.

These missiles are not suitable for use on reactive carriers and are unlikely to ever be deployed on them, thus, unmanned systems remain. Thales demonstrated and tested the LMM at both BAE Fury and Shiebel Camcopter. 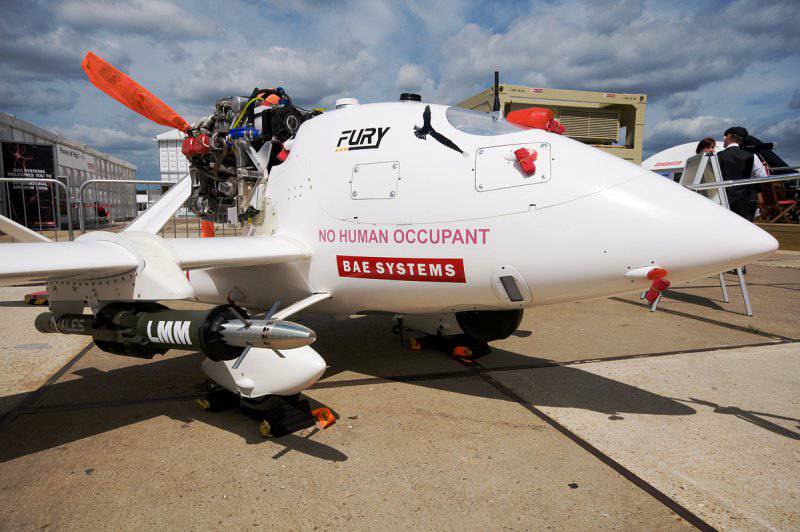 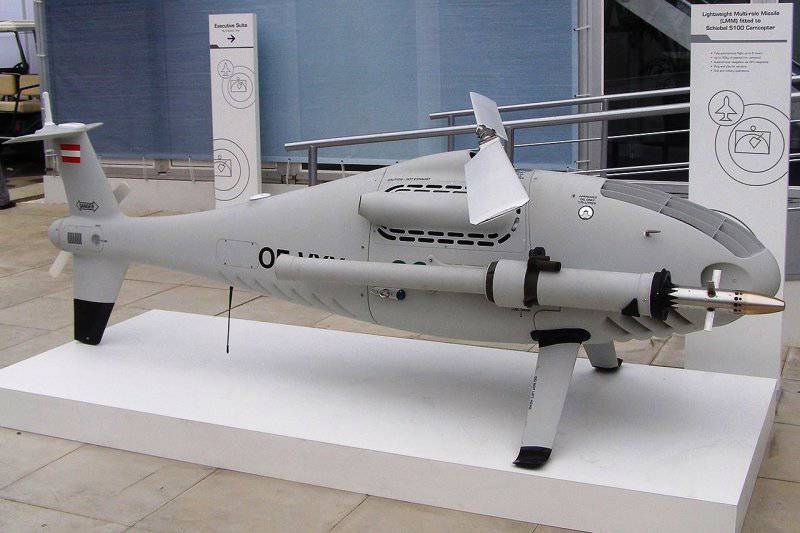 Larger UAVs may even be able to carry multiple missiles, like the Wildcat helicopter. Combining them with the Brimstone 2 will allow you to place a very powerful, effective and flexible set of weapons on one platform.

Despite the fact that the Royal Artillery would like to arm their Watchkeeper UAVs, these desires are not supported financially and they have enough care to keep the Watchkeeper in working condition. Without a doubt, the deployment of weapons will require a significant increase in training, airworthiness and overhead, and whether the Watchkeeper is capable of all this remains a matter of discussion. Even lighter, freely falling weapons may be placed. Thales has developed the concept of freely falling planning ammunition using warheads and LMM missile guidance systems dismantling the rocket engine. 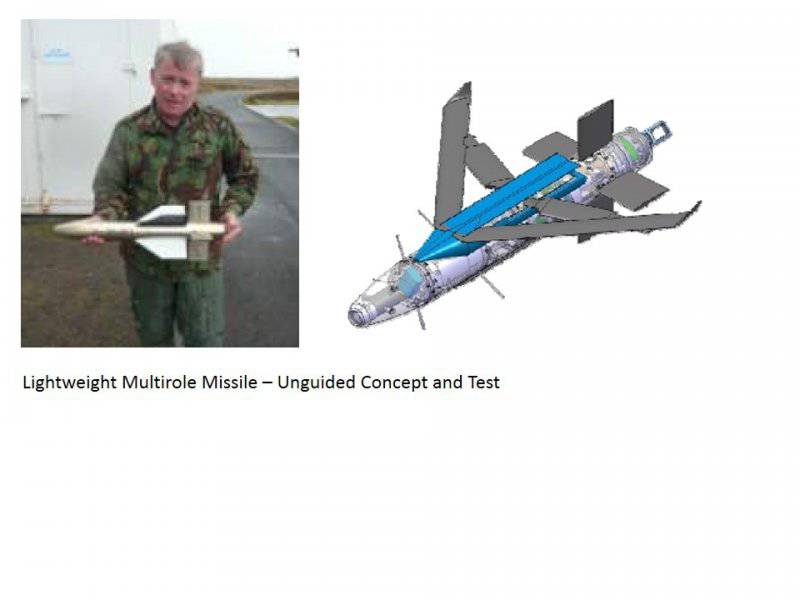 This rather elegant solution maximizes unification.

Since the LMM was designed to take into account the physical dimensions and electrical compatibility of existing Starstreak HVM missiles, it is possible that they can be deployed on numerous launchers in production or already adopted. One such example is the Tor system (Thor) capable of carrying a combination of LMM and Hellfire rockets as needed. 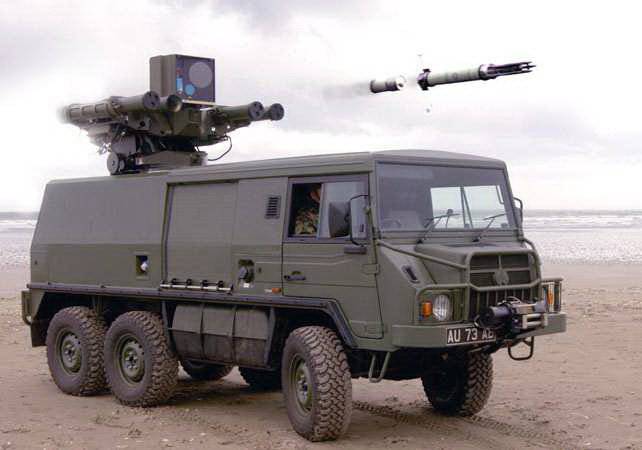 In ground conditions, in difficult situations, where accuracy and a reduced radius of destruction are necessary, the LMM rocket can serve as a low-power alternative to the Javelin anti-tank systems. 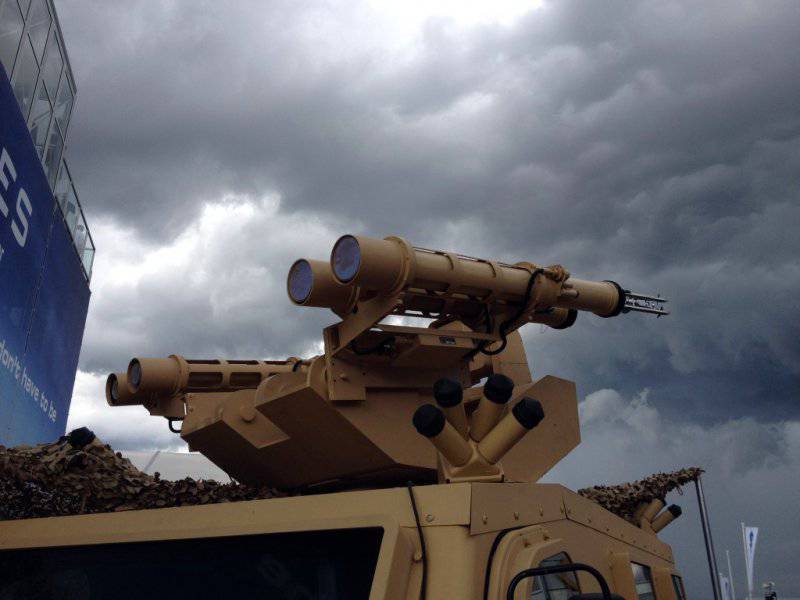 This kind of lung weapons can be placed on almost any ground vehicle, if it is suitable for Starstreak, then it is also suitable for LMM.

You can even imagine a pair of rockets placed on Base-ISTAR balloons to enable instant destruction of flying targets; rocket has no recoil when firing.

The LMM has also been demonstrated (and tested) on a naval platform Seahawk sigma, as shown below, in combination with the Bushmaster automatic 30-mm naval gun. MSI is one of the little-known British arms manufacturers, which would be worth to tell more. 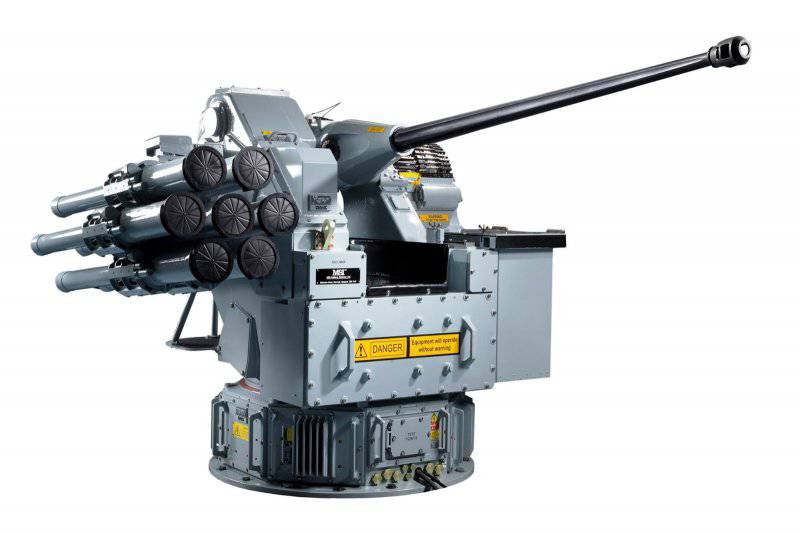 The Turkish company Aselsan demonstrated the LMM in a naval launcher with 4 and 8 LMM missiles. 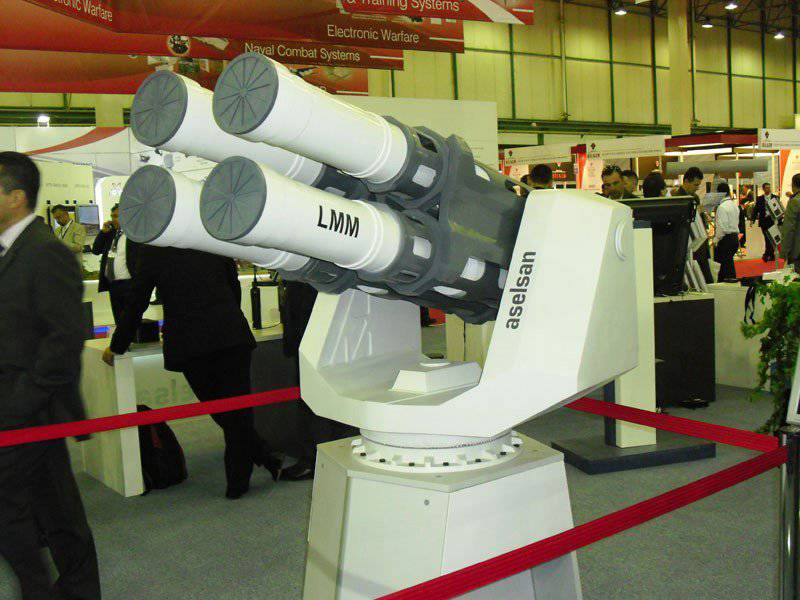 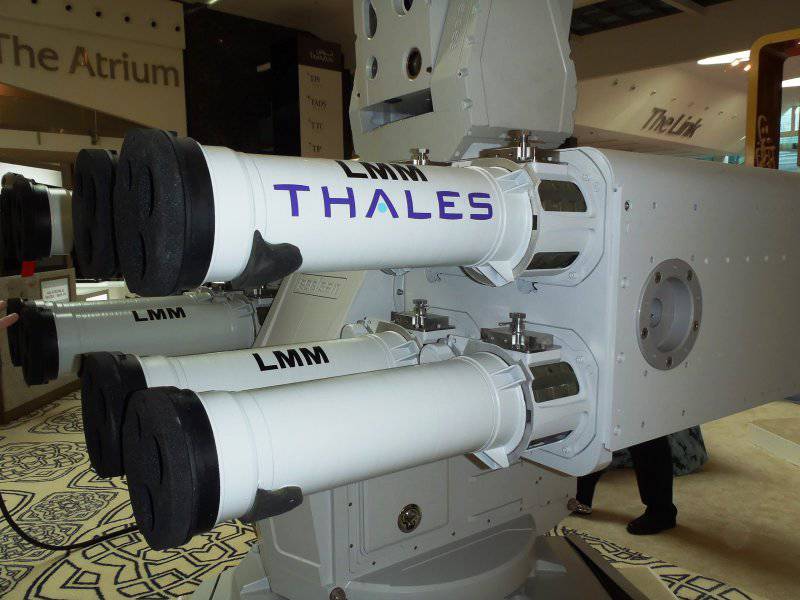 Light multipurpose missile system has a stock of modernization. Thales offered a small explosive warhead, a high-powered warhead and a tandem armor-piercing warhead, all with a homing head.

The current contract involves the development and production of laser-guided 1000 missiles, but Thales has already demonstrated a system with semi-active laser-guided (SAL), allowing for external target designation. It will also allow the system to be applied against several targets, such as the mosquito fleet.

Reportedly, the UK Department of Defense called on Thales to incorporate a half-curved laser homing head into an existing contract within the “total costs”, and the system is already so mature that there is a possibility that the production versions of the rocket will be equipped with dual-mode homing, laser-guided and on the reflected laser beam. Other models include an inertial guidance system and a satellite guidance system, as well as an infrared thermal imaging homing head.

LMM is developing relatively fast thanks to the flexibility shown by the UK Department of Defense, Roxel and Thales.

The necessary compromises were made and, as far as can be judged, these were completely reasonable compromises.

LMM is an exact replica of Brimstone, an efficient and innovative system whose export potential is limited due to its deployment and future plans.

It is necessary to wait for LMM to appear on ships, land and air platforms - when, of course, it will be ready!