Do not want retribution - return the loot and repent 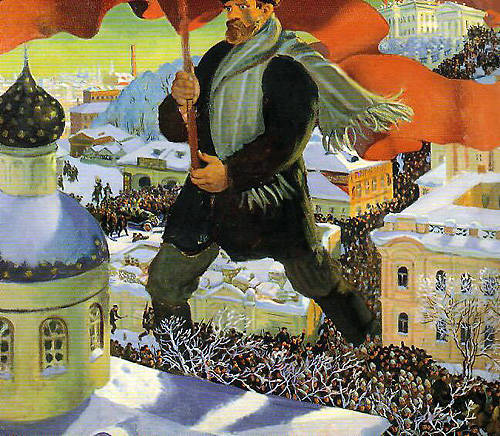 All that has been rejected from the country must be returned.

Sociologists of the Higher School of Economics blamed Russian society for "Weimar sentiments." They found symptoms of authoritarian syndrome in society. True, what they mean in their understanding is that they do not fully explain: the main thing is that the "antipode of the democratic". That is, what “democratic consciousness” is, they explain, and what “authoritarian” is not.

One of the hallmarks of the authoritarian syndrome, the authors of the study, Valeria Kasamara and Anna Sorokina, see the need of the Russians for a "strong patriarchal leader." Clear evidence that citizens have such a need, they, however, do not lead, confirming this only by the well-known results of Levadov polls that 63% of citizens advise the president and the government "to control the economic and political life in the country more strictly."

Why this should be considered a “strong patriarchal leadership,” also remains unexplained by the authors. Obviously, they simply do not know that strong leadership can exist in both democratic and authoritarian systems. And they differ only in that in the first a strong leader is the leader of the majority and acts in their interests, and in an authoritarian one that he is the leader of a minority and acts in the interests of the latter.

The fact that in democratic countries there were such strong leaders as Abraham Lincoln, Franklin Roosevelt, John Kennedy, Winston Churchill, Yalmar Branting, Olof Palme, Bill Clinton and many others, of course, is unknown to them. In the Higher School of Economics it does not pass. As well as the fact that all of the above are fairly "tightly controlled economic and political life in the country."

Likewise, the assertion that citizens of Russia are precisely to authoritarian political leadership is not justified in exactly the same way: it is simply stated, that's all. So the authors like it.

Another sign of the authoritarian syndrome, according to Kasamad and Novikova, is that, according to them, the Russians are frankly unfriendly to other countries. This is confirmed by the fact that in January of this year 70% of Russians told the sociologists of the Levada Center that Russia has enemies - the United States, NATO, Chechen militants and "certain political forces in the West."

That is, according to the authors, the citizens of Russia, who even during the last 20 years, when we ourselves refused to confront the West, constantly experience unfriendly and often hostile policies from both NATO and the United States, would have to say that Russia has no enemies. And the United States, NATO, Chechen fighters and famous "political forces of the West" are friends. And the bright manifestations of their friendship are the deployment of missile defense in Eastern European countries, obstacles in deciding whether to join the WTO, missile defense, various arrogant actions of the OSCE, the European Parliament, long-term support of Wahhabism in the North Caucasus ...

That is, these sociologists take research data indicating that the citizens of Russia have their own opinion (different from the opinion of the staff of the Higher School of Economics), indicating that they, the citizens of Russia, are not schizophrenics and masochists, but react to political reality in the way a normal person should react - and on this basis they declare the latter carriers of the “authoritarian syndrome”. If we proceed from this approach, then the carriers of democratic consciousness are exclusively schizophrenics.

In general, a sociologist in principle should not give such estimates. He has to fix: these are the dominant trends in the public consciousness, this or that number of people looks at such and such things ... And do not try to say if this is bad or good. But the authors of the study are then employees of the HSE, who became famous among universities as a residual reserve of the “dashing 90's” thinking to be far from academic and scientific. And instead of trying to find out by which social conditions Russian society accepts such and not other values ​​(and if these values ​​do not suit them, then change the conditions that gave rise to them - that is, first of all get rid of the relapses of politics 90-s, which generated economic, social and national humiliation), declare the mood of citizens as a kind of "authoritarian disease."

More authors really do not like that (quote) “in March of this year, the Levada Center found out that 58% of Russians regret the collapse of the Soviet Union. The Russians want the restoration of the Soviet state. " This is a “compensatory reaction,” explained by the growing sense of insecurity in their strength, loneliness and distrust of Russians towards each other, ”the authors of the study believe. And on this basis they declare: “The key element of the authoritarian syndrome of the Russians, in our opinion, is post-imperial nostalgia”. What does it have to do with one thing and another, in general, it is not motivated at all and is not justified.

People had a country. They may not have been satisfied with everything in it, but for most people life was clearly better than in today's Russia. This country was respected, it was considered, and it was something to be proud of. This country was destroyed - including those who were recruited into the HSE since its inception. Russian citizens regret this destruction. Your country was destroyed - you regret it. What does the "post-imperial nostalgia"? And if this country was not an empire, but a small republic like Switzerland, would people not regret its destruction? They took home. Who can blame them for regretting their homeland? Only those who do not know the very concept of "Motherland". And to see here authoritarianism (that is, the power of a minority over the majority) is generally either illiteracy, or mental breakdown, or outright lies and provocation.

They also don’t like that “ordinary Moscow schoolchildren born after 1991 see Russia as a“ boundless, huge country ”,“ which has no equal in the world ”. Well, the fact that it is not “huge and boundless,” can only be considered a person who has no idea about geography — some kind of graduate from an American college.

And the fact that schoolchildren say that she has no equal ... Yes, they would have to say so, keep their sanity, even if they were born in San Marino! Because just like your mother and father are always the best for you, who have no equal, so your homeland (if it is yours) has no equal. Of course, the HSE sociologists would be nicer if schoolchildren from Moscow said that Russia is a poor, damned village of God and humanity, guilty of all sins before the whole world: such ideas would immediately be declared a sign of "democratic consciousness" to "Western values."

By the way, ask these sociologists of American schoolchildren, the answer would be exactly the same. But on this basis, the Americans would no longer declare carriers of “authoritarian consciousness”: this would be called “justified a sense of pride in a great democratic power.”

Another “manifestation of authoritarian consciousness” is considered by sociologists of the HSE that “middle-aged Russians working in Russia are nostalgic for many reasons, but especially for the atmosphere of cohesion, people's willingness to help each other.” The views of MPs are no different from the views of "ordinary" Russians and representatives of the social bottom, the researchers note. And the most terrible thing, in their opinion, of course, is that “the values ​​and views of the representatives of the State Duma allow us to say that in the near future we cannot talk about successful democratization of the country”.

And all this is declared "mood in the Weimar Republic - Germany between the two world wars. By themselves, such sentiments "do not dissolve," said Casamara. “This is an abscess that opens up, as it did in Germany, followed by the realization of a perfect mistake and national repentance,” said the researcher to Gazeta.ru.

If you do not want retribution, return the loot and repent. You do not understand that this needs to be done - do not complain when the people start revenging you. The tragedy of Germany was not in the fact that it had a maturely justified feeling of protest and a desire to pay for humiliation, but that this normal and natural feeling was exploited for inhuman purposes and in order to enslave other peoples.

But this does not mean that it is necessary to give up, as the representative of the HSE suggests, from calls for the national awakening of the country, the revival of self-esteem, the restoration of the territorial integrity of the country and the domestic economy.

These goals need to be set, and they need to be achieved. Anything that was rejected from the country at the end of the 1980s and in the 1990s should be returned to it. And in part of the territories. And in part of the zones of influence. And in terms of economic losses over the years. And thank God that today not only pensioners and officers understand this, but also deputies, and most importantly, schoolchildren who were born after the 1991 tragedy of the year, but are becoming increasingly aware that they have been taken from them and stolen.

As the named researchers note with fear, the installation “Russia is a great power that will keep the whole world in fear” is actively reproduced by the consciousness of adolescents today. So it was not necessary to naively believe that if you deceived, robbed, humiliated a person and stepped on his throat with a boot, then you will be able to live comfortably and without fear.

We are in Yandex Zen
A great interview with Sergey Lavrov: about Ukraine, Obama and Iran
What you didn't want to know about England
12 comments
Information
Dear reader, to leave comments on the publication, you must to register.